Musings of the Madman: Behind the Eldritch Moon

Welcome back all! Speculation runs rampant as to the main villain's identity in the next Magic release. Is it Emrakul, as hinted throughout Shadows Over Innistrad's clues? Is it a more ancient evil? I made a few calls and was directed to one of the more menacing figures in the Magic multiverse...

Our guest is a tall, menacing figure. His pallid skin belies a life longer lived than most men, and perhaps even other species. His slender body is enveloped by a large crimson and black cowl. He is sipping an exquisite blend of coffee from a bleached skull, and that isn't even his most unsettling feature. That would be the voice, gravelly and distant, the echo of a thousand deaths brought forth, the harbinger of eternal night. 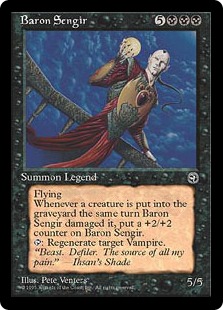 Musings of the Madman (MotM): This is a surprise! It isn't often we have royalty on our platform. It's been a long time Baron, why don't you tell us about your involvement with the current state of the multiverse?

Baron Sengir (BarSen), inspiring deeply: Thank you, pitiful mortal. I'd like to begin by stating that I'm only here because my brethren are soon to overwhelm Innistrad. This fills me with great joy and I'd love to answer any questions you might have, if your primitive mind is indeed capable of such feats.

MotM: Thank you, Baron. Let's get to the heart of the matter: Are you, indeed, the hidden horror behind the chaos in Innistrad and Avacyn's madness?

BarSen: I'd love to answer this more directly, but I must defer to a new non-disclosure agreement. One thing is certain, Emrakul is not the villain. The angels falling are merely a consequence of our superior numbers, intellects, strategies and general deportment. The "madness" is simply deeply curated despair and rampant angelic incompetence.

MotM: I see, how exciting! Did you have any role in the death of the planeswalker Serra and thus an impact on her retinue of angels? That would lead one to believe that...

(A chill envelops the author, perhaps a final warning not to venture too deply into past exploits.)

BarSen: Serra and I had differing views on things. I'm really more of an "embrace the chaos" type, and she got mildly upset after I convinced one of her paladins, Ihsan, that being evil would be more, how shall I put it... fun? We quarreled and she moved on.

BarSen: There was a small incident with Feroz that led to some hurt feelings. I sense we haven't heard the last of her though, these legends tend to resurface at the most inconvenient times or surprising areas, much like tax agents, to be honest.

MotM (with a wry chuckle): Speaking of resurfacing, it appears a collection of entities and spells has been cobbled together in a recent tome. There's even word of some of your autocrats making an appearance. Any thoughts?

BarSen: As you know the heads of the Sengir clan are forbidden from appearing in newly discovered planes, though our agents can do so in limited capacities. There's always need for a firm hand and that's why we sent Augie out there, with a small retinue of servants, of course.

MotM, drinking deeply of a newly handed beverage: Baron, this drink is excellent. What...?

BarSen, laughing: --Oranges. They're quite the crop here, but Ulgothra a lot of trouble cultivating them properly. Enough joking around though, did you have any other questions before I lay down?

MotM: Only one. This new iteration of spell construction called Commander, any advice?

BarSen: Go with the vampires. We don't die, we can bring others to our side, we're elegant, we know the best nightclubs. #TeamSengir forevermore.

MotM: And that - as they say - is a wrap. Sorry to spoil the identity of the one masked by an Eldritch Moon, but someone has to dig into those spoilers.

Until next time, may you sink your teeth into some new ideas!