Musings of the Madman: Can't Beat the Beard!

Welcome back all! This week we're going to the lighter side of Commander and exploring an underused powerhouse in Barktooth Warbeard. Local Commander adept Benjamin Millette had suggested this commander to Nathan, another local enthusiast and added that it had to be: "Beard and Tree Tribal". Of course, since facial hair is involved, we're likely to find some other fun stuff like razors, oils, and so on. It should overall make for a very fun deck, so let's get down to basics! 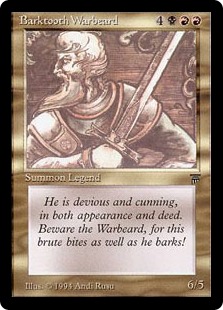 Our first issue arises in his colour identity. There simply aren't a lot of Treefolk in black, and none in red (excluding changeling). Now, the flavour text tells us that he's devious, so we're going to cheat and use Conspiracy. Not the set, the card. This Conspiracy. Everything will be a Treefolk, but not everything will be useful. We can roleplay this as the various people in the deck having some kind of odd fungoid infection and thus becoming one with the forest. Since bears are a must, we're going to include the iconic tribe of dwarves as well. We're going to add some equipment as well, but nothing too pricey since this is for funzies. A key element is a certain treefolk witch, Thorntooth Witch. Not to belabor the pun potential here, but yes, this deck has teeth.

How does it play out?

The deck is obviously a casual one, for your kitchen table. Ideally you get a bunch of early dwarves and treefolk, backed by Conspiracy to give them all some synergy. If you own a Coat of Arms or similar effect in your collection, it will fit quite nicely as everything will have a similar creature type. Eventually you'll arrive at one of the draw engines (Reassembling Skeleton and Skullclamp being the main one) and refuel your losses.

The deck is immensely straightforward, and can be resumed as follows:

Because Conspiracy allows you to alter creature types, you can go the "Minion Plan" if Balthor is out, or you can choose "Warrior" to boost that tribe, or "Treefolk" to get those benefits. Overall just casual mess of cards that should at least bring up some fun stories!

Until next week, may you never bark up the wrong treefolk!