Musings of the Madman: Oyobi, Who Split Your Head

If you've ever wondered about the Spirit of EDH, wonder no more. Tonight's entry makes larger spirit tokens than virtually any other creature or spell in the game. Its' cost? You need to fuel it with either Spirit spells or Arcane spells, the latter of which were found uniquely in Champions of Kamigawa.

Our deck's genesis begins at a kitchen table ages ago. If I recall correctly, Nick Sirman, myself, our friend Jeremy and possibly Ken were all brainstorming what to do with the bunch of cards lying around and suddenly we started ramming them into one deck. I think Tradewind Rider was in there too and some other really good, not-on-theme cards. I liked Oyobi's look, casual optics and jankiness enough to build a deck around it, so here we go. 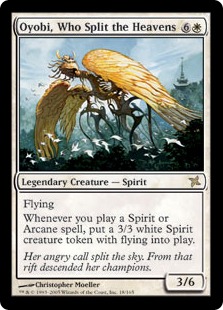 What are the deck's objectives?

You want to ramp the heck out of the gate to cast Oyobi, Who Split the Heavens. Follow up with Tallowisp (which gives you a 3/3 Spirit) and an Aura to put on Oyobi to protect her. Proceed around the table in a timely manner smashing people's heads with spirits. To make your life easier, several of the Arcane spells can deal with creatures or problem permanents. We also have a variety of white staples to help round out the game.

How competitive should I expect this deck to be?

Not very much so. It does have strong cards like Armageddon, but these can be removed for more group-friendly items. Armageddon is there uniquely to seal a win. The deck isn't very nefarious and should be fine at your local table.

What are the deck's strenghts?

There is a ton of artifact mana and a Pearl Medallion to help reduce the cost of your spells, many of which are clunkier than standard Commander fare. Your creatures will have evasion of some form and at times additional abilities. You can get out of hand really quickly if left unimpeded.

What are the deck's weaknesses?

It's very slow and creature-focused. It really doesn't have much of an out if someone tries to combo or just plays their permanents quicker than you do. It has limited spot removal and most answers are sorcery speed.

What are some cool (and annoying?) interactions?

Urborg, Tomb of Yawgmoth and Angry Mob is something I have been dying to do for years now, clunky as it is. Rule of Law and Knowledge Pool is for those "No Fun Allowed" tables. Tallowisp will slowly let you build up Oyobi's defences.

Oyobi, Who Split the Heavens

Of course, you can feel free to add Skullclamp, Swords of any type and so on if you want to turn the deck a little more competitive. As it is though, you should be able to have some fun in a relaxed environment. Adjust as you will.

That's it for this week, here's to seeing you all in high spirits over the coming while.