Musings of the Madman: The Conundrum of Contraptions

Welcome back all! In a few short weeks we'll be graced with the Kaladesh expansion, and central to its setting is something called the "Inventor's Fair". Speculation abounded that, at long last, we'd see something tied to this little gem: 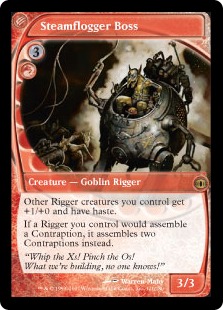 However, Mark Rosewater threw a wrench in the gears, so to speak, by saying that no, we won't be getting any contraptions in Kaladesh. However, we wouldn't be doing our jobs if we didn't speculate on what exactly a rigger or a contraption's functions could be, so let's dive in!

We know the Steamflogger Boss is a rigger itself, so what we're going to do is place some at lower mana costs. A 1/1 Rigger for one red mana, for example, could tap itself (or perhaps itself and another rigger) to put a contraption onto the battlefield. Perhaps there are riggers cross-colour as well? A Boros one could make your contraptions indestructible, while an Izzet one could search your library for a contraption card. The possibilities are near endless. For example:

Probably a little overpowered considering it's a Lightning Bolt tacked onto a search spell, but that's the general idea. Now, of course, we need to find out what contraptions are and how they'll be used. Let's dig a little into the archives to find some inspiration... 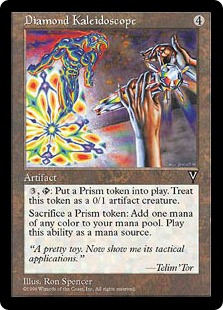 This obscure Mirage block card puts a 0/1 token on the battlefield that can be used to create a mana of any colour on later use. This ability was later used on Gild, which also served as creature removal, fun!

Let's start by thinking that contraptions will be a permanent type that enables extended gameplay. We've seen similar iterations in Theros with enchantments piling onto each other to draw cards, to shrink creatures, to force discard and so on. Let's expand on this. For our purposes, contraptions will be colourless tokens.

Tap three contraptions you control, search target opponent's library for a card and exile it. Play this ability as a sorcery.

Too weak? Unplayable? Probably. But the genesis is there. By tying currently playable permanent types to the new mechanic, we deepen gameplay as a whole. Having these permanents also softens Annihilator if the developers ever want that to return to the battlefield. It makes "permanents matter" decks possible. It makes goofy, casual "exchange" decks viable if you switch a contraption for someone's best creature or even a land they need? Lastly, you can even create an alternate win condition card using contraptions. If you'll excuse yet another pun...

At the beginning of your upkeep, create a contraption token.

At the beginning of your upkeep, if you control twenty contraptions, you win the game.

Twenty might be too much, dependant on the number of contraption removal items in the expansion. Nonetheless, the sky's the limit where it comes to contraptions. They could be a minor part of an expansion, something that could force global removal, extra sacrifice fodder or just another puzzle to be unlocked by the savvy constructed-level players we know and love. And maybe, just maybe, Mark Rosewater is faking us out and there will indeed be contraptions in Aether Revolt or Kaladesh.

Join us soon as we start taking a look at the new Conspiracy spoilers, which will take your multiplayer shenanigans to a new level! Until then, may you invent new modes to keep the Magic fresh!