It's Commander Night at my LGS and I'd like to be headed there, but it's been snowing all day and the snowplows haven't been by yet. This is not a time to Brave the Elements, this is a time to be sensible, make a cup of tea and do the next best thing. Write an article about a mono-white deck. Irony.

In my most recent article, we discussed tuning up “Built from Scratch” for competitive commander play. Today, we're going to give “Forged in Stone” the same treatment.

After I read Cassidy Silver's article “Fat Stacks - Forged in Stone (and Fur)” he basically came to the same conclusion that I did after a superficial glance. We both thought that dropping Nahiri and making Jazal Goldmane the commander, while focusing tokens might be stronger than playing Nahiri at all. However, after playing the deck out of the box a few times, I have come to the conclusion that is not the case. Nahiri is actually very powerful, but has to be built around.

Let's take a look at Nahiri, shall we? She costs 3WW, which is slightly above the 4 casting cost we usually associate with playable planeswalkers. However, this is commander, so I think we can forgive that a little. Her +2 protects herself by making a Kor Soldier, which another one of the things we look for. However, to get full value out of this ability, we really need to have an equipment in play and I think that's where the deck falls short out of the box. Equipment tutors are absolutely necessary. Her -2 lets you put an equipment from your hand or graveyard into play, which is pretty huge with equipments (which will be destroyed, at least until people start playing exile artifact effects) and Batterskull. Finally, her -10 (which should leave her in play if you've protected her) gives you the almighty Stoneforged Blade, which is sick. Now the best ultimate in the game, but it is, very, very good. These effects make Nahiri a completely reasonable card to build around. I think the best way to build the deck is to add tutors and build it like a “Voltron” style deck, except you can stick the equipment on any token. Your backup plan is token beatdown. 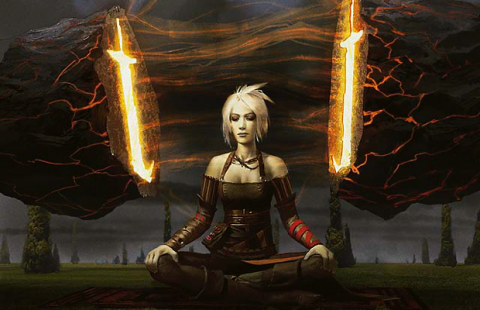 “Some blades seek their own wielders.”

I'd like to dissect the stock decklist the same way we did with “Built from Scratch”. Here's the list for reference:

I began to dissect this deck by dividing it into 7 categories:

So like last time, we'll go ahead and delete the last two categories right away. However, we're also going to delete almost all the equipment, because this is all budget equipment and we're not on a budget. 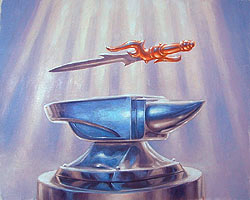 “The crucible yields what you have forged in your mind. You need only reach in and draw the masterwork forth.” - Wahara, Keeper of the Crucible

(TEDitor's Note: I'm having an extremely hard time not adding a Destiny reference in here...)

A Storm of Swords by Keith Ambrose

Angel of Jubilation: A 3/3 flier for 4 is not a bad rate. The obvious reason for running this card is the anthem effect. The ability on the card might disrupt your opponents in some cases too (Looking at you Daretti...)

Elesh Norn, Grand Cenobite: This card is fantastic in nearly any deck, but looks even better in a token deck. If we ever decide to drop the equipment theme, she'll likely be the commander for this deck.

Congregate: Sometimes you can gain 40+ life off this. I usually don't care about life much in Commander, but this card puts you back in the game if you're getting hated out.

Swords to Plowshares: See above.

Tithe: Makes sure we don't fall behind on land drops, while allowing us to run fewer lands, thus drawing more gas.

Hour of Reckoning: You might lose a creature, but often you've already got your value out of them. Your tokens are your bread and butter.

Increasing Devotion: This card is crazy. It makes so many guys.

Mass Calcify: Better part of a Plague Wind again. I like those kinds of effects.

Banishing Light: A versatile catch all.

Divine Sacrament: An anthem that becomes a double anthem late game. It's a very strong card in this deck.

Glorious Anthem: The standard by which all other anthems are measured.

Honor of the Pure: A better Glorious Anthem.

Spear of Heliod: An even better Glorious Anthem. This one kills guys. I love playing Dread in black, seems like a great effect to have in this deck.

Batterskull: Obviously ridiculously strong. I also really like the ability to return this to our hand if the Germ dies, then cheat it out with Nahiri's -2. I also really look forward to using Masterwork of Ingenuity to make a second Batterskull.

The deck's namesake and the best things to search for with your tutors. Grab the one that hoses the most opponents, or grab Fire and Ice so you can draw cards.

Coldsteel Heart: Mana rocks are very important in EDH. I like this one a lot.

Hall of Triumph: The artifact version of Glorious Anthem.

Ajani Steadfast: The minus is what we're really after, to boost the team and other planeswalkers. This has been the worst of the four planeswalkers in the deck. I might replace it at some point.

Elspeth, Sun's Champion: This card on the other hand is amazing in this deck. Makes tokes? Check. Plague Wind? Check. Divine Sacrament plus flying? Check.

Elspeth Tirel: I caught some flack at the LGS for playing this card, but the ultimate is often ridiculous. The other abilities are ok.

Kjeldoran Outpost: It's an on-colour land that makes tokens. It also interacts favourable with out Tithe effects.

Windbrisk Heights: It is very easy to trigger with this deck, so it's just value. Getting a free Elesh Norn or Mass Calcify is really nice.

So there you have it, a mean, lean, equipment machine. Have questions, comments or ideas? Leave me a comment!

Until next time, remember: 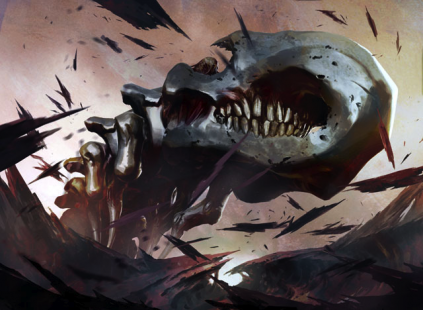 “No matter how strong, an unarmed fighter is no more than a fool.”