Underrated Equipment for an Attacking Commander

Is your commander prepared for an adventure of attacking others? Always remember to bring the proper equipment for the job!

This week, I'm going to write about equipment. I'll spotlight some of my favourite pieces of equipment that help beef up a commander that wants to attack. Could be Voltron by nature, or just a commander with a nice combat ability.

I'm going to skip the swords of blank and blank, which are obviously great. I'm skipping Batterskull for the same reason. No, my style is to bring you some lesser-played cards that do the job just about as well as their much more expensive type-sharing cards. Let's get into some of them! 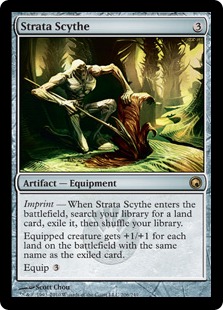 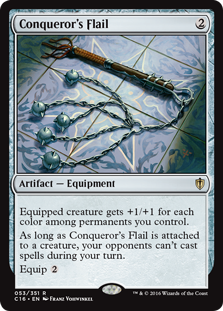 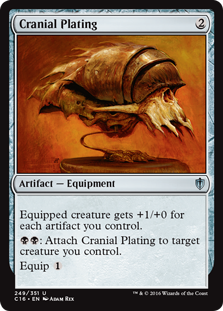 Pump up that power! I always want a lot of bang for my equip cost.

If you're not spread out among many colours, consider Strata Scythe. I like this gear in any deck using three or less colours. Since I brew on a budget, I've usually got five or six basics in each of my colours, and I must point out that this card also spots basics anywhere on the battlefield. It's very possible that your opponents are granting you as much power as you are. That's not bad for an equip for three. But what if your commander is more colours?

Conqueror's Flail. This one's no surprise if you've gotten the latest set of Commander precons, but if you're running four or more colours then this is a phenomenal rate for a big power boost. I love equipping this to my O-Kagachi. That bonus about locking out opponents spells is a pure cherry on top.

Lastly, depending on what your deck is doing, a Cranial Plating is a beating. You've got to be in black, which is a minor restriction, but being able to move it at instant speed is a boon. It's worth considering even if you aren't dedicated artifacts. The average number of mana rocks plus a few extra artifacts makes this well worth it. 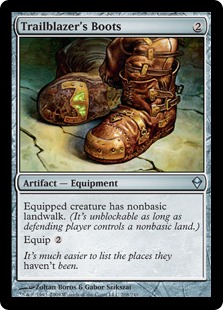 So, our commander is attacking for gobs of damage, but that's useless unless we find a way to get them through enemy lines.

I think the most overlooked piece of equipment in this regard is Trailblazer's Boots. I think that's because it sneaks through using terms most cards don't use. Nonbasic landwalk. Show me a player without any non-basics and I'll show you a battlefield that just had a Ruination resolved. Even a mono-coloured deck will be running some non-basics.

Then there's Prowler's Helm. A player with only basic lands is extremely rare. The next smallest demographic in Commander is a player with actual walls. I'm not counting wall tribal decks. (Though, that's not a bad idea for a deck... I'll come back to that one).

Our third option is another sort-of unconditional unblockability enabler. It's certainly the most delicious equipment ever printed. Let me introduce, Hot Soup. Most decks don't run direct damage, since that's a much less efficient tactic in our format. Any spell that'll destroy whoever is carrying the soup would have done so no matter what, I think. This soup has little chance of spilling. 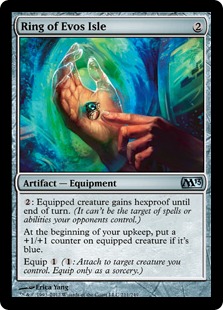 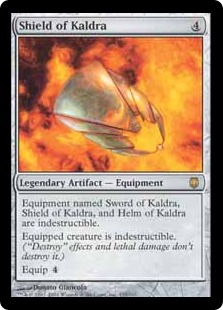 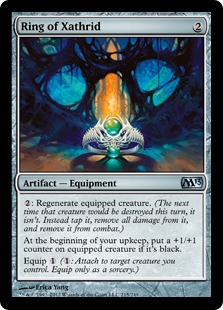 So, now that we're all geared up and ready to go, let's carry some protection.

I'm pretty sure every Commander deck Wizards ever printed had a Swiftfoot Boots in it. It and its cousin Lightning Greaves are highly enough played in decks that they won't be surprises to anyone. But if you need more ways to prevent opponents from exiling the bearer with pesky spot removal, I'm happy to run a Ring of Evos Isle. If my general is blue, that's a no-brainer, but depending on your meta, it's worth considering even in a non-blue deck.

Since wraths don't target, we'll also want something like the Shield of Kaldra to make the wearer indestructible. The shield's value goes up even higher if we're slinging around spells "destroying" all creatures, since ours will still be around when the dust settles.

One last affordable way to protect your commander from destruction is the Ring of Xathrid. Those rings! Similar to the "blue" ring, being able to regenerate is a convenient way to survive a wrath. Well, except it's namesake Wrath of God, or any other one that won't let us regenerate. 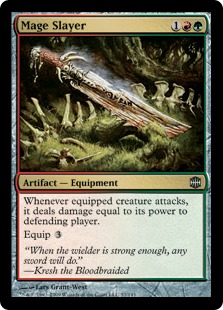 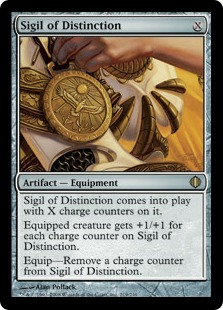 I wanted to mention a couple more pieces of ordinance that are special cases. Mage Slayer doesn't mess around. From a rules perspective, commander damage can only be done in combat, so this isn't a sneaky implement of destruction. No, this one is a straight beating. You'll know if your deck runs creatures that can benefit. Lastly, Sigil of Distinction can be a wonderful mana sink that can also equip in the future without tapping any lands, allowing you to maximize your resources while still transforming your commander into a real powerhouse.

There you have it! A few ways to suit up your Voltron of choice, whether they be your commander or any other big dumb idiot you happen to be running. Happy attacking!