What if I Want to Sacrifice a Non-Creature?

Any deck should have a couple sacrifice outlets in it, in the event your opponents try to steal or exile your creatures. You want this? Well, too bad, it's in the garbage now. Most sac outlets also give us some sort of benefit beyond just saving our creatures from a Mind Control too. But what about those times we want to sacrifice other things besides creatures?

I'm not going to show you any new creature sac outlets. Instead, I'm going to go over a few cards you might consider if you find yourself needing to save other permanents from getting exiled or stolen! 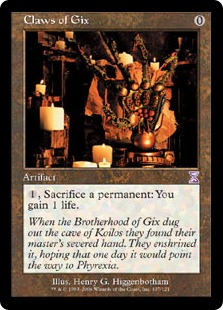 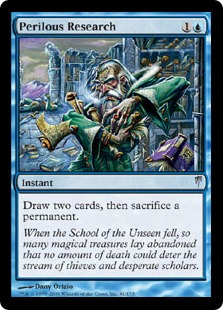 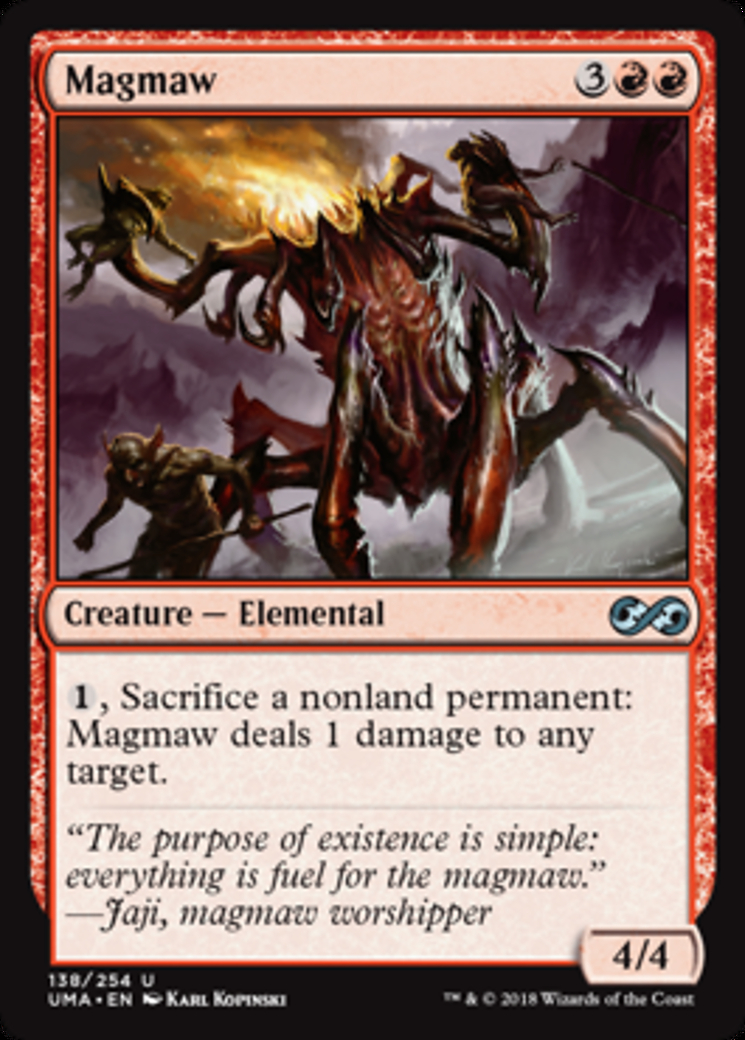 Let's start big. I want to talk about some cards that allow you to sacrifice (almost) anything you need to. Claws of Gix is a nice place to start because it couldn't be cheaper to cast at zero converted mana cost. Its effect is nothing back breaking; one life for one permanent at the cost of one mana. But that's the ultimate flexibility there.

If you happen to be running blue, Perilous Research is an instant way to "save" one of your permanents from exile as well as draw you two cards while you're doing so. Maybe you'll draw a way to get it back from the graveyard? The reason I added that "almost" earlier was Magmaw. This isn't something I'd expect to use for any real effect, but the possibility to pick off some obnoxious utility creatures is very real. Like some of the ones coming up later in this article! 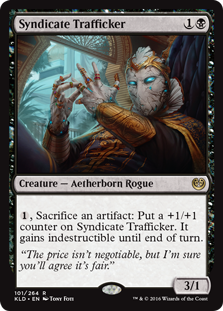 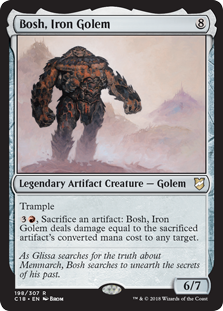 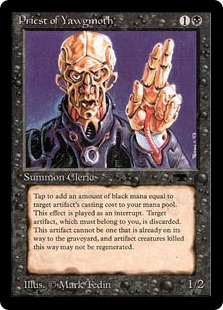 What if we're running an artifact deck? Being able to sac artifacts is a necessary effect! Especially since most of those decks will be looking to get them back out of the graveyard. Syndicate Trafficker does a nice job of binning an artifact while getting bigger and surviving a wrath effect at the same time. Seems like a good time to sac another artifact creature destined to die.

Bosh, Iron Golem is an effective way to sac an artifact and do some real damage, literally. Bosh is part of some real wincons in the decks it's a part of. I can also see using Priest of Yawgmoth as an artifact sac outlet, as well as some ramp while we're at it to fire off another instant, if we care to. I like the Priest's utility in that way. Ramp OR rescue! 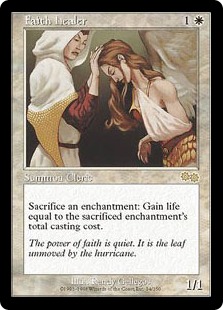 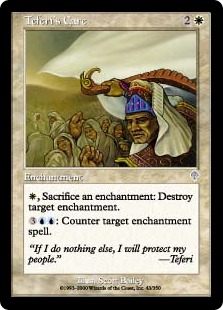 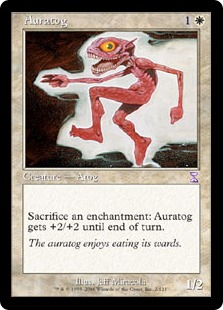 I suppose it's no surprise that white gets most of the cards to sacrifice enchantments, since that's the colour that's probably making the most of them. Faith Healer, although weak to the aforementioned Magmaw, is a useful way to keep your enchantments out of the exile zone and back in the yard where we can grab them. Plus we can gain a bit of life while we're at it.

Teferi's Care is an interesting one for Azorius control decks. If you're a sort of draw-go deck, this seems good to keep all of those pesky Gods and Rhystic Study-s off the battlefield. Then there's Auratog. There aren't many ways to eat an enchantment, but luckily, the Atog family's got you covered. 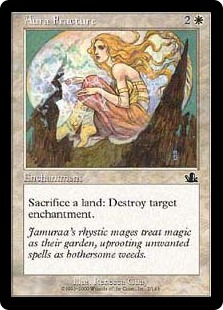 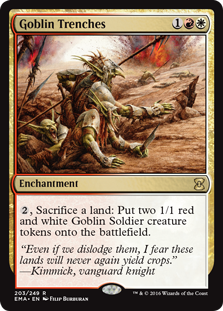 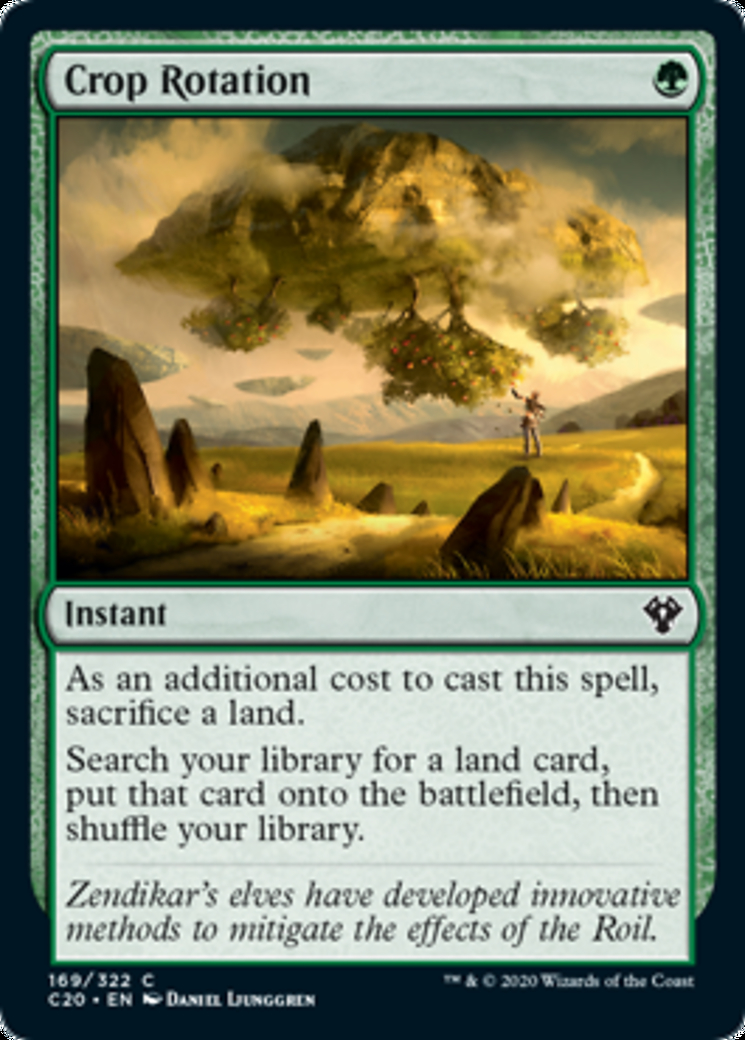 Admittedly, I rarely find myself in a position where people are exiling my lands that I'm hoping to recur from the graveyard, so this is more for completion of the article. There's some cool cards to make use of lands we don't care about anymore. Aura Fracture is pretty pricey in terms of what you're giving up, but you can ensure no bothersome enchantments will stick around too long. Got a token swarm strategy? Goblin Trenches is great to run just before your "go for the win" turn happens, so you can spend all your resources to try to make one last push for victory. And good ol' Crop Rotation is the best way to trade in a boring basic land into any utility land you might need at instant speed. It's already a fairly highly rated land, but still a bit underrated. 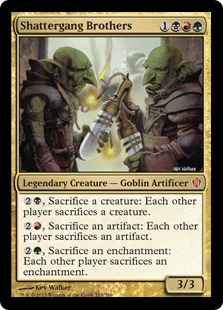 If we're talking about sacrificing different things beyond creatures, the Shattergang Brothers are tops. A fun commander for anyone out there who doesn't want anyone touching our stuff for any reason!

There you have it! If you have another favourite non-creature sacrifice outlet, comment below or tweet it @seantabares. Thanks for reading!