Let's just go to the head!

Welcome to another Daily Dose of Magic Origins! We are back with more previews of what’s looking to be an amazing new set, Magic Origins! We’ve already talked about some of the new mechanics coming in Magic Origins, as well as some of the new DFCs (Double-Faced Cards) planeswalkers that will be arriving as well. Now let’s turn our focus to a deck archetype that currently isn’t seeing much play in Standard, but that could change, Red Burn!
I’m going to focus on 4 new cards from the set, which could lead to the rise of this deck in Standard tournament all over the country.
Let’s first take a look at some good old straight forward damage in Exquisite Firecraft.

Currently in Mono-Red, the 3-drop slot is being occupied by Hordeling Outburst and sometimes Goblin Heelcutter in Dash mode. This is a great card to add in to that slot, and along with Stoke the Flames, another 4-damage spell, which can be a great way to finish the game or get rid of an annoying 4-toughness creature like Courser of Kruphix. The great thing about Exquisite Firecraft is its ability against Control to get those last points of damage in once your opponent has started to lock down the board. Thanks to Spell mastery they won’t be able to counter the spell.
Now let’s take a look at a Red Creature that will be causing havoc in the next couple of months, Goblin Piledriver. 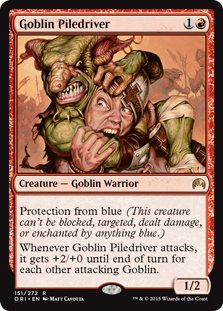 What a reprint! On top of it having protection from blue, which is an added bonus, there are lot of cards currently in Standard that can help grow Goblin Piledriver to 3, 5 or even more damage in one turn. Some of the cards currently in Standard that will benefit from Goblin Piledriver are, Goblin Rabblemaster, Dragon Fodder, Hordeling Outburst, Foundry Street Denizen, and Goblin Heelcutter. Just having Goblin Piledriver in your deck, makes all of these cards even more value than they were before. Look for 2-3 of this card in Mono-Red decks going forward.
Let’s take a look at an amazing finisher and card for Mono-Red decks that isn’t even Red, Pyromancer’s Goggles!

Now this is a very narrow card with huge upside. Most people will not play this in any deck that has a few red spells or as a mana source. The mana source in most instances isn’t even the important part of the card, as most times at that point in the game, you will have the mana needed to cast the spell. Being able to copy all of your damage spells, to either clear off multiple creatures or most importantly do double the damage to your opponent. Just think of some of the spells you can copy:
- Stoke the Flames
- Exquisite Firecraft
- Anger the Gods
- Arc Lightning
- Atarka’s Command
- Crater’s Claws
- Hordeling Outburst
- Jeskai Charm

The list goes on and on of cards you want to be casting through Pyromancer’s Goggles!
The last card we will be looking at is a card that Mono-Red decks have been looking for for a long time. Welcome Molten Vortex.

Have you ever gotten to the mid-point in a game using Mono-Red and you draw a land card. You already are at 4-5 mana, and any additional land card you draw at this point, is not additional damage you could be causing your opponent. Now with Molten Vortex, you can have every drawn card matter. Being able to use this multiple times in a turn as well can lead to some extra damage. Knowing that every card you draw from your deck will be able to do some damage, will allow Mono-Red decks to be a force in the months to come.

Thanks again for reading and look forward to seeing you tomorrow for another Daily Dose of Magic Origins, thanks again!