Welcome all to another edition of the Daily Dose of Magic Origins! Today we will be looking at second new mechanic from Magic Origins called Spell Mastery. This will give an advantage to all those Magic players that love to sling the spells, and build some burn or control decks. Let’s take a look at what Spell Mastery does.

Spell Mastery – If there are two or more instant and/or sorcery cards in your graveyard, ~ does [enter cool stuff here]

Sometimes spell mastery gives an additional effect to the card, and sometimes it will alter the amount of what it’s already doing. We will see examples of both in the some cards coming up.
Let’s look into some examples of some decks that can really take control of the Spell mastery mechanic.

Burn – This is a no brainer. When you are directing lots of spells right to their head for damage, being able to activate Spell mastery shouldn’t be a problem.
Control Decks – Since Most of the deck, it not all is spells to being with, achieving spell mastery should be done by turn 3 or 4.
Sultai Delve – Even though you will often be delving a lot of your cards out of your graveyard, most of the times you will be leaving some spells in there to be brought back with Tasigur, so expect there to be enough spells in their to activate Spell Mastery once you start getting cards into your graveyard at a quick rate.

Let’s take a look at our first card, Ravaging Blaze. 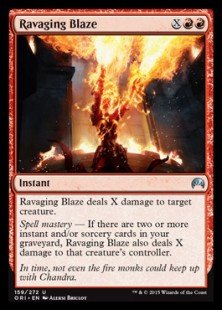 I see this card as a potential to be a very large Searing Blaze and/or Searing Touch as we’ve seen in cards before. Having a nice late game card, that not only can you build up your mana for, but cast as an instant to both remove a creature and deal some damage to your opponent, this should be seeing play in Grixis Control decks in the near future.
Now let’s take a look at Nissa’s Pilgrimage. 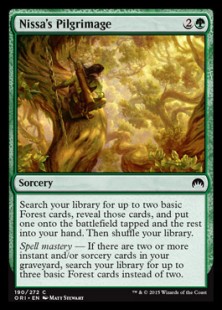 Although Nissa’s Pilgrimage seems to have a drawback of only getting Basic Forests instead of all basic lands, it still has the possibility to get 3 lands out of your deck and into your hand and on the battlefield. Due to its drawback, this card is more of a ramp than a color fixer, as previous similar cards like Cultivate have been. For Green/Red beatdown decks though, being able to play land drops for many turns to come, will allow them to cast the large creatures they need to win the game.
Let’s take a look at another card, Dark Petition! 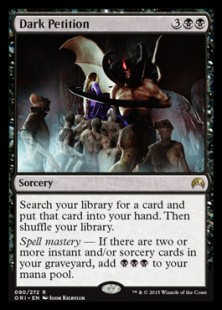 What I love about this card, is that most of the time for most tutor cards in the near past is that you can get the card you are looking for one turn, but then you have to wait until the next turn to cast it. With Dark Petition, it will allow you get to you what you need to help you in your game and in most cases, cast it in the same turn. Need a removal card, go search for removal like Ultimate Price and cast it right away. Need a creature for some beatdown, go get Tasigur and cast it in the same turn. Need a long-term threat, go get the new Liliana DFC, and cast it right away. There are lots of possibilities for this card, and I’m looking forward to seeing what it can do.
So overall from what I’ve seen so far, I’m quite impressed with what Spell mastery is bringing to the table, and can’t wait to see what other spells become available once spoiler season is done. Thanks again to everyone for reading, and I will see you tomorrow with some more previews from Magic Origins!