Before I get to the first one, I need to talk about a card that plays a big part in its card. Here's Monk of the Open Hand.

Monk of the Open Hand 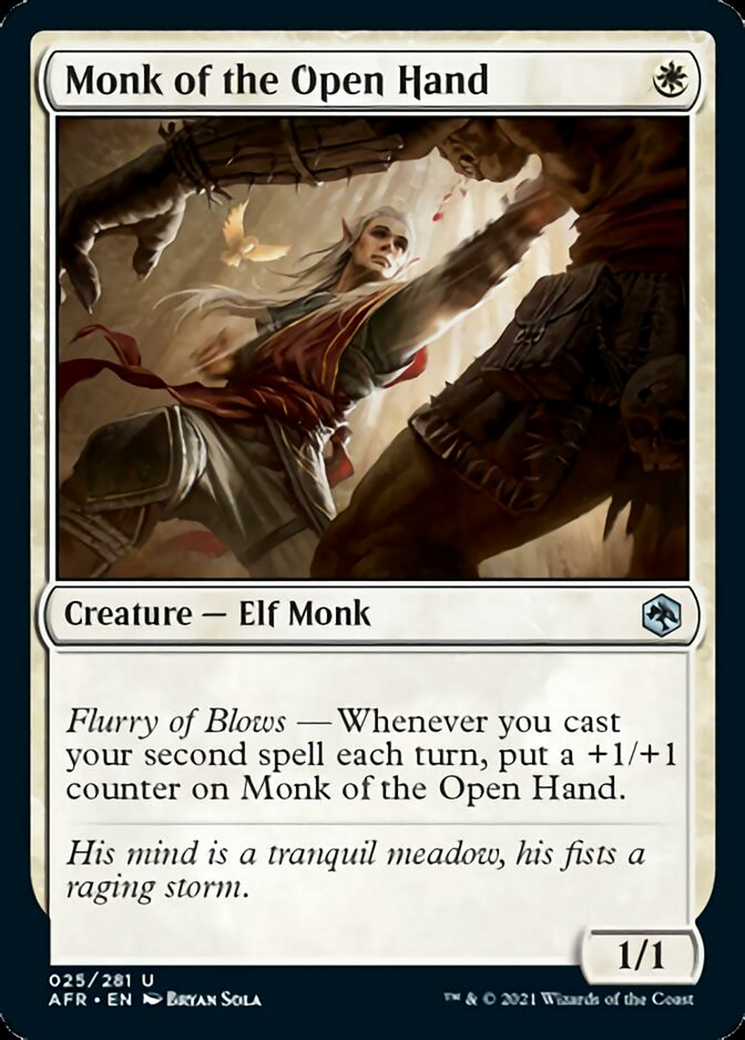 Now I can talk about a character that everyone assumed would be a Dragon and, in a way, he is. Here's Grand Master of Flowers. 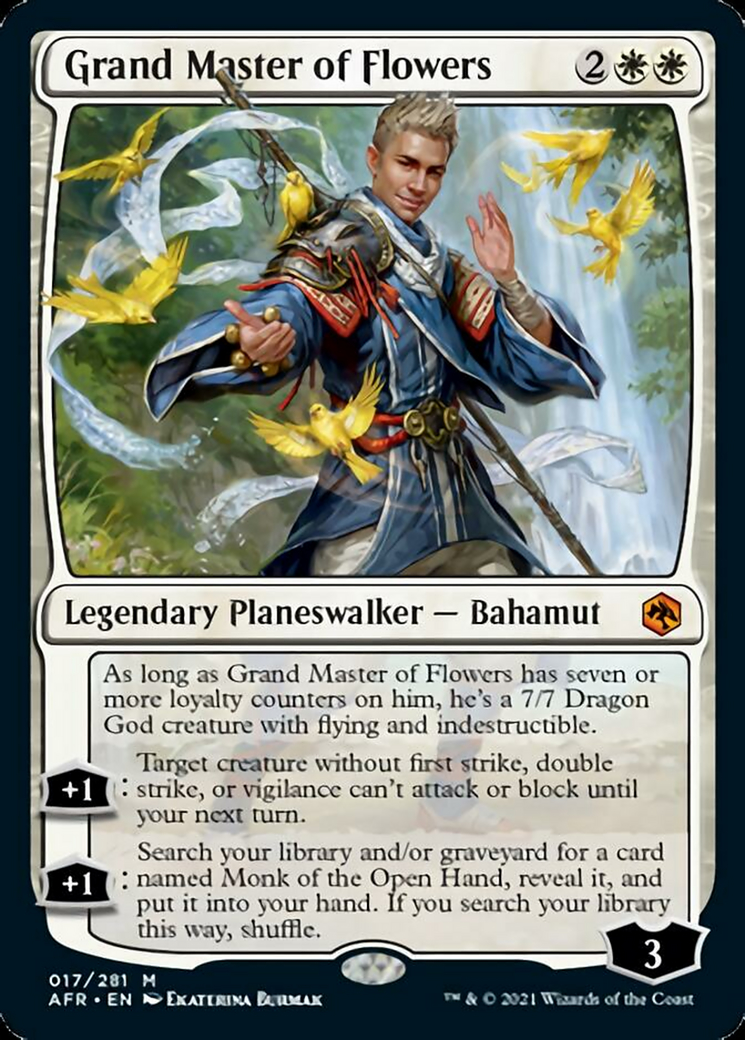 It’s rare to have a planeswalker with only plus loyalty abilities, which is why it starts at a relatively low three loyalty. Let’s break down the abilities of this planeswalker.

As long as Grand Master of Flowers has seven or more loyalty counters on him, he's a 7/7 Dragon God creature with flying and indestructible. – With a starting loyalty of three and only gaining one loyalty per ability, it'll take four turns without it losing any loyalty to become a Dragon. This is basically the ultimate ability for this planeswalker.

[+1]: Target creature without first strike, double strike, or vigilance can't attack or block until your next turn. – This is one of two loyalty abilities you can use to protect Grand Master of Flowers. It’s good that these aren’t commonly used keywords that you need to worry about on creatures. You're most likely to see first strike or vigilance, but most of the time you’ll be able to shut down one creature a turn.

[+1]: Search your library and/or graveyard for a card named Monk of the Open Hand, reveal it, and put it into your hand. If you search your library this way, shuffle. – If you can’t target the creature or if you want to add a threat to the battlefield, you can get Monk of the Open Hand and cast it for only one mana. Since you can also search your graveyard for it, you can reuse the same creature each turn if you’d like to block with it repeatedly.

The next character represented in the new set is a powerful archmage named Mordenkainen. 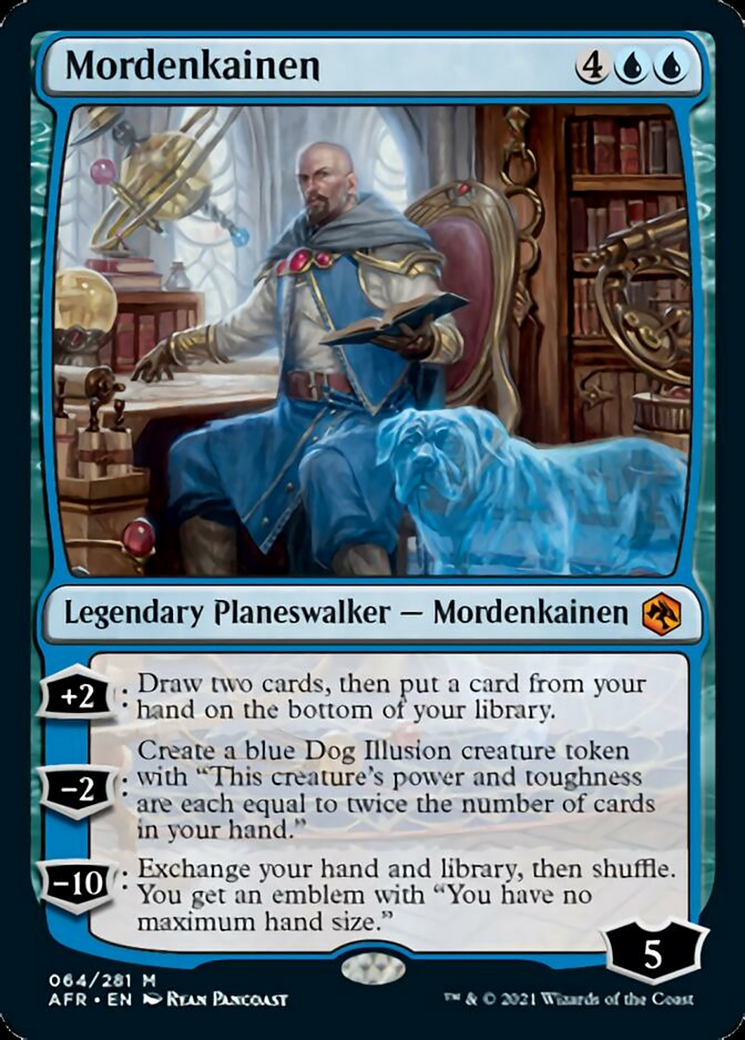 Six mana is quite expensive mana cost for a planeswalker, but that also usually means you're getting a powerful card. Let’s break down the abilities of this planeswalker.

[+2]: Draw two cards, then put a card from your hand on the bottom of your library. – Drawing an extra two cards per turn on a positive loyalty ability is just incredible. Each turn you'll see at least three cards and get to choose the best two to keep. This ability also puts Mordenkainen at seven loyalty right off the bat.

[-2]: Create a blue Dog Illusion creature token with "This creature's power and toughness are each equal to twice the number of cards in your hand." – This is another way to protect Mordenkainen by making a powerful Dog token. Each turn after, if you're using the draw two cards ability, it'll gain power and toughness at a strong rate.

[-10]: Exchange your hand and library, then shuffle. You get an emblem with "You have no maximum hand size." – Depending on when this ability gets activated, this could be a good or a bad thing. You'll get a ton of cards instantly, but if your hand size is low when you do the exchange you won’t have too long before you deck yourself. Played correctly though you get to draw your entire library.

Two more powerful characters represented by two powerful planeswalkers. These are some great additions to the new set that are sure to make a difference in Limited and Standard play in the coming months. Thanks again for reading the Daily Dose and join me again tomorrow as I talk about more cards, more strategies, and more fun from Adventures in the Forgotten Realms.