Welcome to another Daily Dose of Aether Revolt where today I’ll be talking about a new preview card with a familiar feel to it.

I thought that we would be done with Planeswalker Oath cards when Oath of Liliana came out in Eldritch Moon, but the Gatewatch was not complete. So here to join the crew, here is Oath of Ajani. 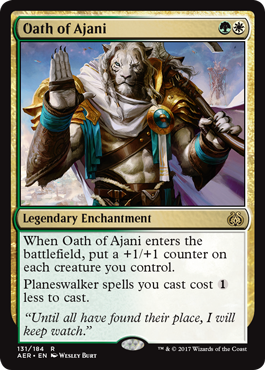 Here is another well-designed card that allows the player to figure out and build a deck around whether they want the enter the battlefield trigger to be the star of the card or whether reducing the cost of your Planeswalkers is more important to your end game. Being able to pump up your creatures across the board is something we have seen in Standard recently thanks to cards like Nissa, Voice of Zendikar, Always Watching and Gideon, Ally of Zendikar. So, you should ask yourself what is better, giving your creatures +1/+1 or being able to cast your Planeswalkers for a reduced cost.

Here are some of the best Planeswalkers currently in Standard that Oath of Ajani can be played with that use its colours or only need to add one more colour to use it.

One of the biggest things to think about for Oath of Ajani is whether you want to multiple copies of it in your deck being a Legendary card and what turn you want to be playing it on.

A lot of your decisions on whether to play multiple copies of Oath of Ajani comes down to how you build your deck. If you have multiple Planeswalkers that will take advantage of being cast a turn earlier, then it would make sense to have more of them to make sure to draw it on turn two as most of the better Planeswalkers cost four mana. If you play less Planeswalkers and more creatures, you probably want to play more creatures in the early game to build your army and then have this in the mid-to-late-game to pump all your creatures.

Now that you’ve figured out how many copies you will be playing with, the next choice is to figure out what turn to play it on.

Turn 2 – You would be looking to play Oath of Ajani on turn two if your main plan is to get out an early Planeswalker on turn three. Depending on your draw you might get the bonus of having a 2/3 Thraben Inspector if you could play one on turn one.

Turn 3 – If played on turn three, this will allow you to cast only a few Planeswalkers earlier than you normally would. If you can curve a nice draw such as Thraben Inspector into a Thalia’s Lieutenant, you would have five power on the board ready to attack on turn three.

Turn 4 or more – Playing this on turn four or later could allow you to pump up three or more creatures on the battlefield while allowing you in future turns to cast a reduced casting cost Planeswalker and a new creature on the same turn.

As you can see, a card like Oath of Ajani provides a lot of choices when it comes to deck building and when to play it making it one of the best cards I’ve seen in Aether Revolt so far. Thanks for joining me on the Daily Dose of Aether Revolt as we start to see more and more great preview cards from the new set. I look forward to seeing what’s in store next!