Welcome all to the Daily Dose of Aether Revolt, where today I’m going to be switching gears and helping you prepare for this weekend and your local Aether Revolt prerelease event. Today I’ll be going over 10 Commons from the new set that I believe are must plays when it comes to getting your 40-card (41 card in my superstitious case) deck ready for battle. I was a big fan of the Kaladesh Limited format and did very well at the Kaladesh Prerelease weekend going undefeated over two events. I’m hoping that this continues this weekend and here are 10 Commons cards that I am hoping to see when I crack open my packs. 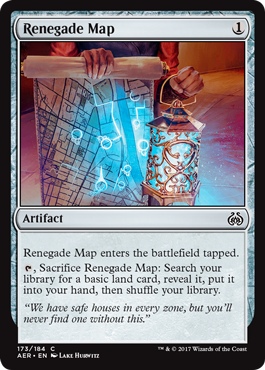 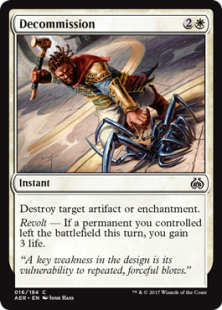 Deccomission – Don’t be leaving this card in your sideboard and waiting to see if there will be some artifacts in your opponent’s deck. Spoiler alert, there will be. If you gain three life from the Revolt trigger that will be a bonus, but the main power of this card is being able to remove a quarter of the cards in the set. 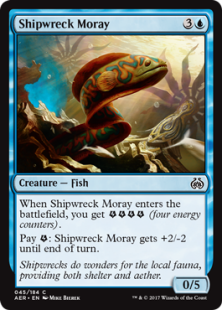 Shipwreck Moray – I’m a big fan of cards that give you lots of Energy, and Shipwreck Moray doesn’t disappoint. It also gives you an 0/5 creature which will be hard to get through on the ground. When you have a chance to go on the offensive, you can get in for four damage at a time thanks to than initial Energy you got. 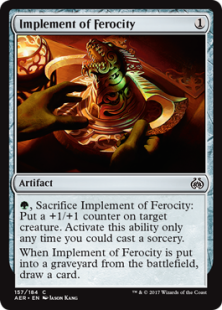 Implement of Ferocity – This Implement stands out more than the other four artifacts as it can put a permanent extra point of damage onto the battlefield. Green is also a colour with a lot of Revolt cards which this card helps trigger. There are also a lot of cards that take advantage of creatures having +1/+1 counters, so all around this is the best of the bunch. 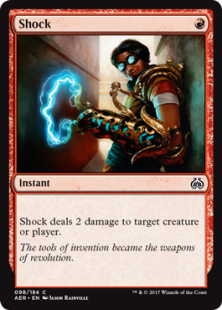 Shock – True, it’s no Lightning Strike, but two damage for one mana is still very powerful. Shock will be able to surprise players who aren’t used to a lot of one mana removal spells being in the format, especially in Kaladesh, where most of the one casting cost spells were combat tricks rather than removal. 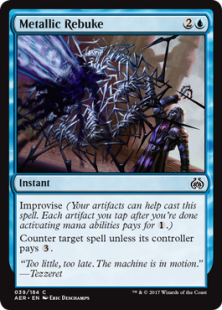 Metallic Rebuke - Players have been wanting a Mana Leak reprint for a while now to have a good two mana counterspell in the format. Currently there is Revolutionary Rebuff in the format, but if you are playing the right deck, I believe that this can be a better card than that. There will even be some circumstances where you will be able to cast it for one mana, which will catch some players by surprise. 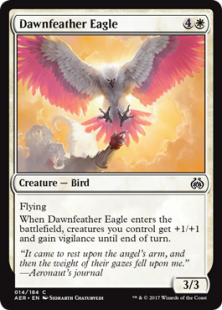 Dawnfeather Eagle - Having a strong spell-like ability added onto a creature is always a way to turn the tides in a game of Limited. With all your creatures having vigilance on top of +1/+1 it will lead to some unfavourable blocks for your opponent as well as leaving up blockers for their attack. You also get a solid 3/3 Flying creature left behind too. In games that run into a creature stalemate, having this bonus across all your creatures can be just what is needed to power through and get in some damage. 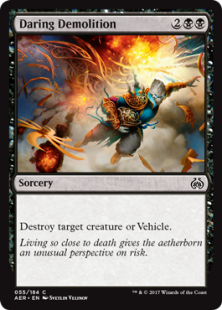 Daring Demoliton - Removal spells are always important to have in Limited and this is a versatile one. Black doesn't usually have spells or abilities that allow them to destroy or deal with artifacts, so it is nice that they now have a spell to deal with Vehicles. Now you don't have to wait for instant creature removal to take care of a Vehicle. Often common Black removal spells cast five or six mana, so having a common removal spell for four mana is quite nice.

Unbridled Growth - Green has always provided the best resources to allow you to play three and four colour decks in Limited. Unbridled Growth will help you play those three or four colour decks, but later in the game when you have all the coloured mana you need, you can sacrifice it to draw a card. Being able to replace an enchantment card later in the game means you don't have to worry about it ever being a dead card if you draw it when you don't need it anymore. 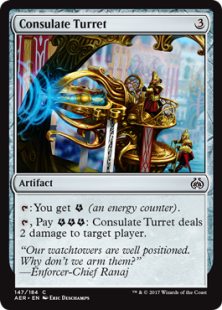 Consulate Turret - This mini Dynavolt Tower is a great way to have a renewable source of Energy. Even if you don't have another use for all the Energy that you'll be getting with Consulate Turret, you can save it up and start using it to ping off your opponent's creatures with it. If you do have other Energy enablers in your deck, this just improves how you are going to be using all of them. Having a permanent artifact will help with Improvise cards as well.

Are there any other commons that you believe will make an impact during your prerelease event? Thanks for reading another Daily Dose of Aether Revolt and hopefully you’ve found some Common cards that you want to put in you deck this weekend. Join me tomorrow where I’ll be going over ten of the best Uncommons that you will want to be playing.