Daily Dose of Battle for Zendikar – It’s time to awaken the land!

Welcome to another edition of the Daily Dose of Battle for Zendikar! Today we will be talking about a new mechanic that will allow you to get maximum value on some of the new spells coming out in the new set. Just remember that the new set comes out on October 2nd!

Zendikar is a land that is known for having its land cause lots of destruction, and now you can awaken the lands to fight against the Eldrazi thanks to the new Awaken mechanic. Let’s take a look at the first card taking advantage of this new mechanic, it’s Ruinous Path.

Players have been wondering what card will replace Hero’s Downfall when Theros block rotates out in October, and now we have our answer. This will probably be the only spell in Standard going forward that will be able to directly destroy a planeswalker, so even though it’s sorcery speed, I can still see this seeing play over the next year in Standard. Dreadbore saw play at sorcery speed, so this shouldn’t be any different.

Now let’s take a look at its value mode, Awaken style! So if you draw this card late game and you were hoping to draw a creature, now you can both destroy something and turn any of your lands into a 4/4 creature. This could just be the two-for-one you need to turn the game around.
This is card that Control players will be wanting to draw on turn 3 and on turn 7, which makes it a card that you will be seeing a lot of in the near future.

Let’s take a look at Coastal Discovery, another of the new Awaken cards.

At first glance this is a much worse draw spell than similar cards like Divination and Artificer’s Epiphany. A lot of times when you are using spells to draw cards, you aren’t advancing your board state by missing a turn to put a creature onto the battlefield. Coastal Discovery allows you to get a 4/4 creature onto the battlefield that basically says draw 2 cards. Think of it as a Mulldrifter in spell form. Control players will favour using this card in the late game so they don’t tap out early to draw cards and leave the board open.
Have you ever been in a situation where your next turn you are seeing lethal damage coming across at you and you have no cards in hand. You draw your card and know that you are going to either draw removal for one of the creatures or one creature that won’t be able to block both of your opponent’s creatures. Welcome to value town with Sheer Drop! 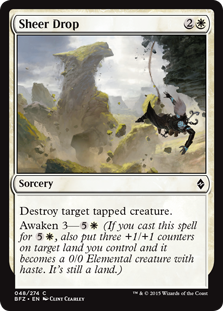 Talk about a nice two-for-one potential with this card. Although not as powerful as the rare Ruinous Path, there is a still an opportunity to get some value on this card. To make this card valuable in most situations you will have to take damage once from a card when it is attacking, but there are still lots of opportunities where this will come in to play. Look to see this card more in Limited play than in Standard play for sure.

What you will see is a change on how control decks work going forward. There will be more turns in which a control players taps out because of Awaken cards. The awakened lands will be the finishers that control players need without having to put in creatures in their deck lists. This will allow them to have more removal for early game and more damage in the late game.

Thanks again for reading another edition of the Daily Dose of Battle for Zendikar. We will back with some more previews tomorrow.