Daily Dose of Battle for Zendikar: Top 10 Uncommons to watch out for in Limited!

Welcome to another edition of the Daily Dose of Battle for Zendikar! It’s Battle for Zendikar prerelease week and everyone is getting excited to try out the new cards this weekend. Yesterday we talked about 10 of the commons that you shouldn’t overlook when it comes to building your decks for prerelease weekend. Today we will look at the 10 uncommons that should be played in your decks. Here we go! 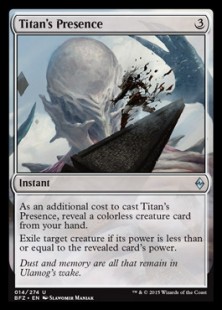 This will be one of the premier removal cards that you will be able to cast in almost any deck you play on prerelease weekend.. short of mono-white. If you can play mono-white, that’s quite the pool you've got! Every deck will have some colorless creatures to use for its activation and for 3 colorless, you can exile most anything your opponent brings forward.

Each color will be getting a Retreat “choice” enchantment, but by far this is the strongest. Being able to put a 1/1 into play every time you play a land, let alone an Ally is very strong. Once you get enough of those pesky Allies into play, you can than give them all +1/+1 to finish off your opponent. 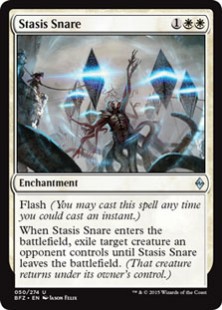 Cards like Journey to Nowhere and Oblivion Ring have long been used to deal with big creatures that your opponent has played onto the battlefield. Stasis Snare continues that tradition with the added bonus of being able to cast it instantly as an amazing combat trick. There is also very little enchantment removal in the set, so the majority of the time, Stasis Snare will be a permanent creature removal. 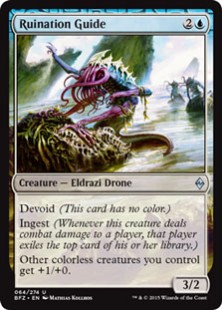 This card brings 2 things to the table that will help your deck if you are playing blue. First off, Ingest is a new mechanic that is being overlooked by many players, but there are a lot of powerful Eldrazi Processors kicking around and removing cards from your opponent’s already small 40-card deck will be good value. Secondly, it gives a power boost to all of your colorless creatures. There are a lot of colorless creatures, especially in blue, so giving them +1/+0 can do some extra damage throughout the game. 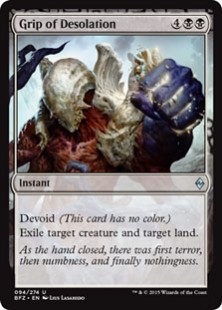 Grip of Desolation is one of those cards in Limited that can blow out your opponent in one swoop. If your opponent decides to spend some extra mana on an Awaken spell, you have the opportunity to get a two for one by killing a creature and one of their “creature” lands, allowing you swing the game in your favor. 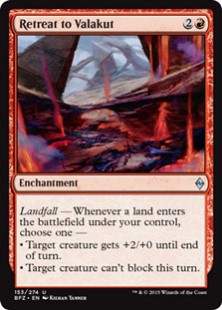 Retreat to Valakut is the kind of card that will allow you to finish off games. Both of these cards Landfall options are offensive options that can add some damage quickly. If you already have a creature with reach you can get in an extra 2 points on damage. Have a ground creature that’s having trouble getting through? Why not give it some help! 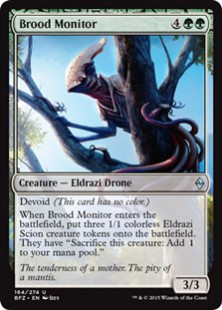 There are a lot of ramp options when it comes to cards that produce Eldrazi Scions and Brood Monitor takes it to the extreme. Brood Monitor provides 6-power across 4 creatures in which you can also use to ramp up to Eldrazi like Ulamog, the Ceaseless Hunger. This is the creature that provides the most Eldrazi Scion, which also serve as 4 nice blockers if you are behind on the battlefield as well, giving you time to get some more cards to use. 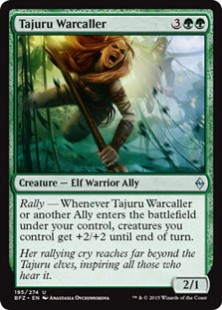 Even if you treat Tajuru Warcaller like a spell (like most Rally cards are), giving all of your creatures +2/+2 can help the alpha strike needed to win the game. Imagine playing this the turn after you played Brood Monitor. 6-power over 4 creatures just turned into 14 power. There could be a lot of Eldrazi Scions on the battlefield, so this can be a game ender on many occasions. Don’t forget there are plenty of Allies going around, so if needed this can be activated over and over again. 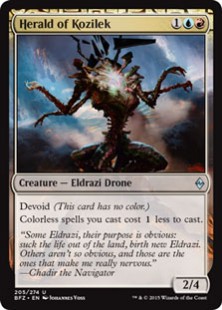 This should be no surprise, as I’ve written an entire article on the power of this card. To summarize, there are so many colorless spells that there is opportunity to get a lot of value from this card. With 4 toughness it will also be tough to kill as well. 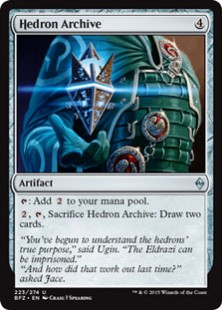 There are a few mana producers in Battle for Zendikar that can fuel your Eldrazi and friends, but Hedron Archive provides a little extra value if that mana’s not needed. Similar to Dreamstone Hedron and Mind Stone, this is the in between variant that can draw you 2 cards mid to late game if the 2 mana a turn it provides is not needed.

Thanks again for reading another edition of the Daily Dose of Battle for Zendikar. Tomorrow we will looking at some Standard Decks that could be seen in the coming months. Look forward to seeing you all next time!