Welcome all to the Daily Dose of Dominaria, where another preview week is going strong as we get ever closer to prerelease weekend.

As we have seen so far, there will plenty of strong Legendary and non-legendary creatures in Dominaria. Some of those creatures, who I’ve talked about in earlier articles, also benefit from having Equipment attached to them. 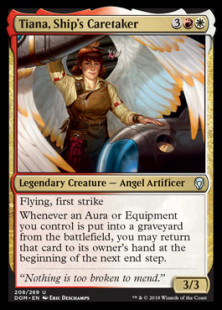 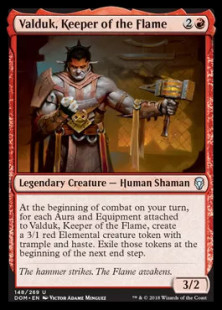 Valduk, Keeper of the Flame creates a 3/1 Elemental token for each piece of Equipment attached to it. Tiana, Ship’s Caretaker will make sure you are able to reuse your Equipment if they happened to get destroyed. Since we have these powerful Legendary creatures that take advantage of having Equipment, it’s time to talk about some of the new Equipment from Dominaria.
First up is a piece of Equipment that can prevent its user from being killed off during combat. Here is Shield of the Realms:

The first thing I noticed about this card was the low equip cost. Being able to move it from creature to creature for only one mana means you can use it when attacking and blocking. In most cases, this equipment should read, “Equipped creature gets +0/+2” which isn’t that great of an Equipment. There will be the odd time where it will do more that just add two toughness to your creature. It will prevent more damage if they are trying to kill it with burn damage and combat damage in the same turn.

Also, if two damage has been prevented on the equipped creature, you can still move it to another creature without fear of it losing its toughness and dying from the damage done to that creature for the turn. So, after evaluating the card, it is better than I initially thought. However, I don’t think it will see play outside of the Limited environment.

Next, we move from defence to offence with an Equipment that makes sure that you'll be pushing damage through to your opponent. Take a look at Forbear’s Blade: 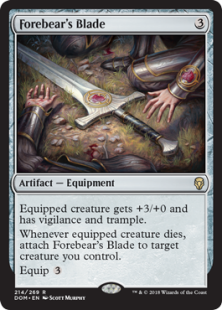 Now that’s what I’m talking about. This card wants to go on a creature that wants to get into the red zone and start dealing some serious damage. Having vigilance as one of the added abilities means that you can have it block if it survives combat. Even if it doesn’t survive combat, Forbear’s Blade will just automatically be moved over to another one of your creatures.

Forbear’s Blade becomes even better when equipped it to a creature with first strike or double strike. Take Danitha Capashen, Paragon for example. Having Forbear’s Blade equipped on her will make her a 5/2 first strike, trample, vigilance, lifelink creature that can both attack and block. Without removal from your opponent, this creature will be near impossible to stop.

Have you ever wanted to have two copies of the same Legendary creature on the battlefield at the same time? Is that pesky legendary rule getting in the way? Fear not, Helm of the Host will make sure you can do just that. 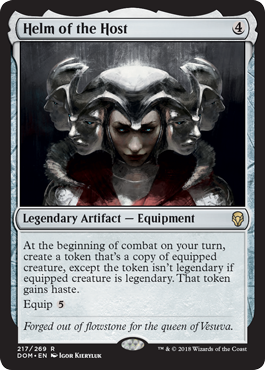 This card has high mana costs all over it. To start off, it costs four mana to cast, which is high for an Equipment. After that, it costs an additional five mana to equip to a creature. However, if you do equip it to a creature, it will start pumping out clone tokens of that creature every turn. Even better, it can copy Legendary creatures and it gives the tokens haste as well. At first, I thought the tokens would go away during the next end step, but no, they stay around! This is obviously a powerhouse in Limited, but as mentioned before, it might be a bit too expensive to see play in Standard. I would rather play a Mirage Mirror over this card.

The last Equipment I want to talk about today is a Legendary Equipment that truly wants to be equipped to a Legendary creature. Here is Blackblade Reforged: 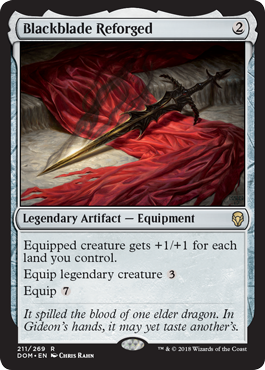 This Legendary Equipment packs a powerful punch that only increases in power as the game goes on. It’s cheap to get on the battlefield, with a casting cost of only two. However, when it comes to equipping it on to a creature, you better hope you have some Legendary creatures around!

By the time you can equip it on to a creature on turn four or five, you will be giving that creature +4/+4 or +5/+5. Let’s use Danitha Capashen, Paragon as an example again. If you have her on the battlefield, you can cast and equip it for four mana on turn four. This will allow you to attack with a 6/6 first strike, vigilance, lifelink creature. This makes it even more powerful than Forbear’s Blade. You want to make sure you have enough Legendary creatures around though. Unless you like spending seven mana to equip it a non-legendary creature, that is.

There you have it, four powerful Equipment you want to be playing at your upcoming prerelease. Equipment cards are so powerful just in the fact that they can be re-equipped repeatedly even if the creature it equips dies. This makes them much more durable than Auras, and they can be used in any deck you want to put them in.

Thanks again for reading the Daily Dose of Dominaria. Join me again tomorrow as I finish off another preview week with the returning mechanic, kicker.