Welcome all to the Daily Dose of Innistrad Crimson Vow. Today I’ll be giving love to all the Red mages out there. I’ll be talking about three new Red cards including the return of Chandra, a powerful new Dragon, and a Werewolf that wants to burn everything down. I enjoy Red as a Magic colour because it often has three levels of cards designed for it; Aggressive, Controlling, or ‘Big Red’. The three cards I’ll be talking about today mostly fit into the latter category of Red cards.

To start off I want to talk about a new Werewolf that can deal extra damage to up to three different targets. Here is Volatile Arsonist // Dire-Strain Anarchist.

On each attack, you will deal either five or seven damage depending on if it’s transformed or not. There will be some scenarios where the ground is just too crowded and you won’t be able to get through for damage, but that can also happen with Goldspan Dragon and flying blockers. I am willing to give this Werewolf a try for myself.

Next up is a Dragon that’s looking to turn your noncreature spells into Dragons. Here's Manaform Hellkite. 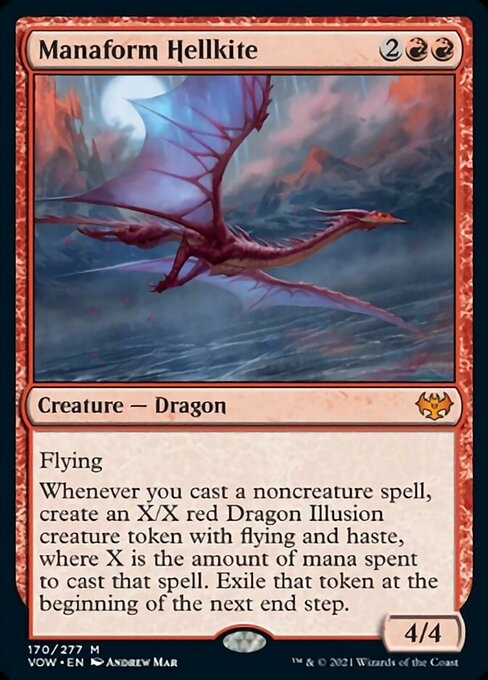 To start off you get a solid 4/4 Dragon with flying. Each of your noncreature spells will create an X/X Dragon Illusion token, where X is the amount of mana used to cast that spell. If you look at the current Izzet Standard deck, there will be a few Dragon Illusion tokens created with Manaform Hellkite on the battlefield thanks to an abundance of spells in the deck. Unexpected Windfall and Memory Deluge will both create a 4/4 token (With the possibility later of a 7/7 token thanks to the Flashback cost on Memory Deluge). If you play Burn Down the House you could have eight power of haste creatures attacking your opponent. Some of the largest creatures though could be created with the extra turn spell Alrund’s Epiphany and the dual damage spell Shatterskull Smashing.

Now it’s time for the return of Chandra. Here is Chandra, Dressed to Kill. 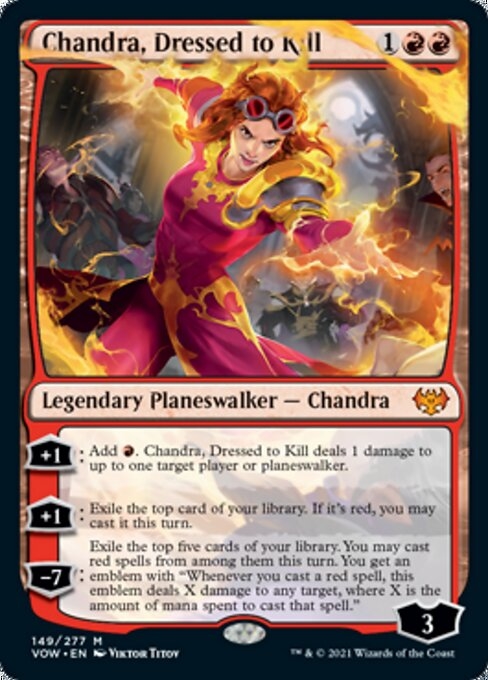 It’s always great to see a three-mana planeswalker in Standard. Chandra, Dressed to Kill even starts at three loyalty with two positive loyalty abilities. Let’s break down the abilities for this planeswalker.

[+1]: Add R. Chandra, Dressed to Kill deals 1 damage to up to one target player or planeswalker. – The main value of this ability is being able to ramp in future turns by adding R. This ability will also slowly damage your opponent for one damage a turn which could add up over time. It’s unlikely that one damage will kill any planeswalker your opponent might have on the battlefield.

[+1]: Exile the top card of your library. If it's red, you may cast it this turn. – By playing a Mono-Red deck, you'll have on average a 60% chance of hitting a card that you can cast. If you don’t have any use for the extra R mana you could get from the first ability than it makes sense to spin the wheel and hope you can get a red card to cast. At a minimum, you will increase the loyalty for Chandra, Dressed to Kill by one.

[-7]: Exile the top five cards of your library. You may cast red spells from among them this turn. You get an emblem with "Whenever you cast a red spell, this emblem deals X damage to any target, where X is the amount of mana spent to cast that spell." – This is the ultimate ability that keeps on giving. I would think that the emblem by itself would be powerful enough to win you most games, but the fact that you will get on average three cards to cast from the top of your library, that’s a huge bonus.