Welcome all to the Daily Dose of Innistrad: Midnight Hunt. Today I’ll be talking about the return of Teferi as well as some of the sweet new Angels from Midnight Hunt. Teferi is becoming the new Jace when it comes to the number of appearances in recent Magic sets, with each version being different in design from the previous one. This time around we see the return of an Azorius version of Teferi, ready to help slow down time to prevent it from being night all-day long. On top of Teferi, I want to talk about three new Angels present on Innistrad. Angels have always been one of my favourite types of creatures to play with and I’m glad to see them return in Midnight Hunt.

First up is an Orzhov Angel looking to help you recur your creatures. Here is Liesa, Forgotten Archangel. 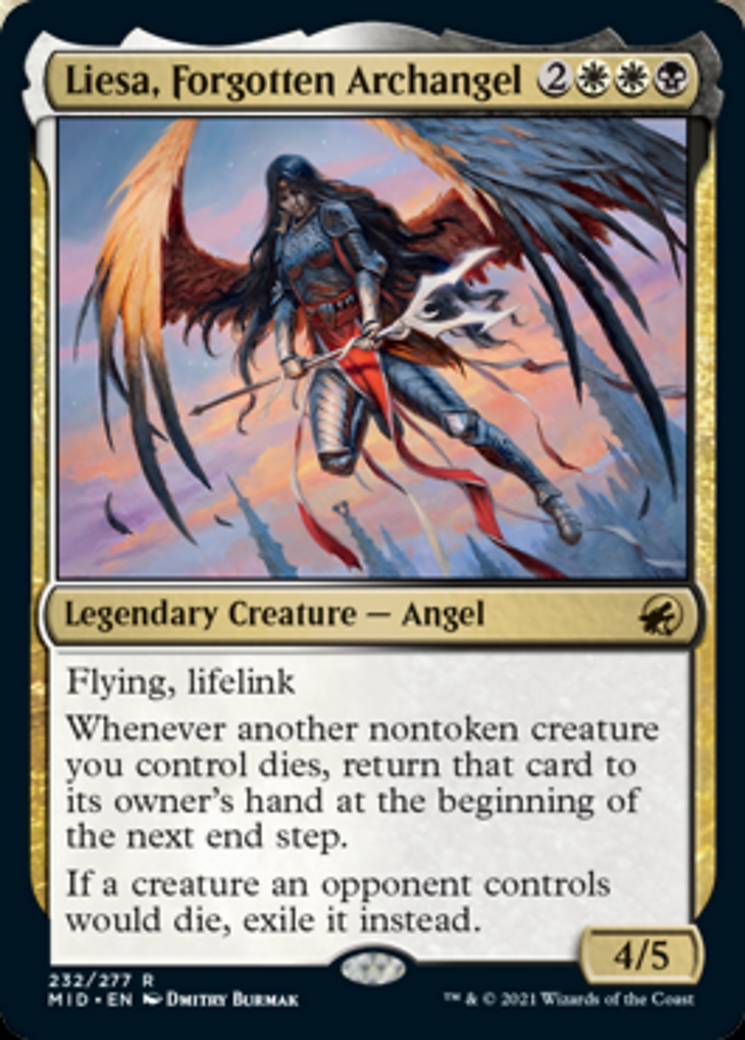 To start off you get a 4/5 Flying, Lifelink creature for only five mana. This alone makes it a solid card thanks to evasion and Lifelink. Having five toughness on a Flying creature is rare as they usually top out at four or lower. It also has an ability for both when your or your opponents’ creatures die. For your opponent, their creatures will get exiled instead of going to the graveyard, which is strong in a graveyard synergy set. For yourself, your creatures return to your hand on the next end step. This puts a large target on Liesa, Forgotten Archangel, and pretty much makes it a kill on sight.

Next up is an Angel that reanimates your smaller creatures. Here is Sigardian Savior. 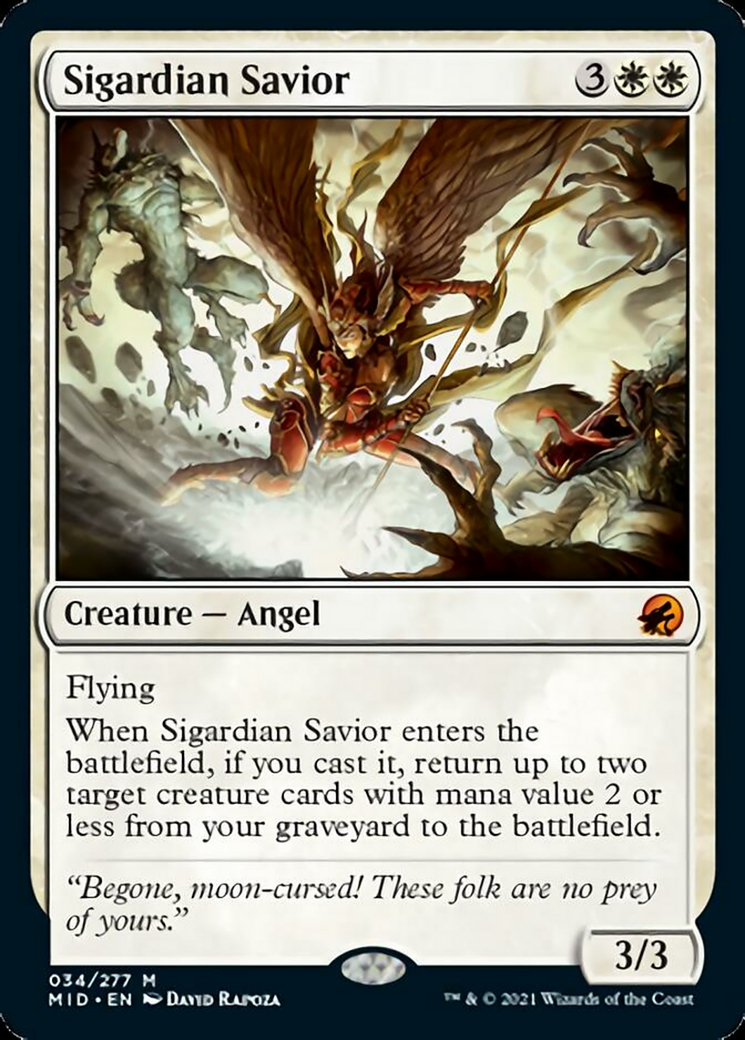 At its base stats, you get a 3/3 Flying creature, which isn’t spectacular for five mana. However, its potential value comes from its enter the battlefield ability. There have been many creatures that have helped you reanimate one creature upon casting them, but to get two creatures back on the battlefield is simply spectacular. Sigardian Savior allows you to have a game plan of trading creatures early during combat and bringing them back for free mid-game for some three-for-one value. I think this card has a ton of potential, but you would need to build your deck around having some quality two mana value or less creatures.

The last Angel I want to talk about is one that will help you stay alive. Here's Enduring Angel // Angelic Enforcer.

This is the Avacyn of this set in my opinion. No matter what side of the card it gives you Hexproof, allowing you to survive direct damage or any disrupting spells. With Enduring Angel on the battlefield, your opponent will be forced to remove it or give you an extra turn or more to recover. As Angelic Enforcer, it'll grow larger with each attack as it doubles your life total. Even as a regular attacker on its front side, being able to deal six damage each attack will put a quick clock on your opponent. It will be interesting to see what kind of deck this sees play in. If you can protect it, it could be a win condition both offensively and defensively.

Now that we've seen the Angels, it’s time for the return of Teferi. Here's Teferi, Who Slows the Sunset.

Teferi, Who Slows the Sunset 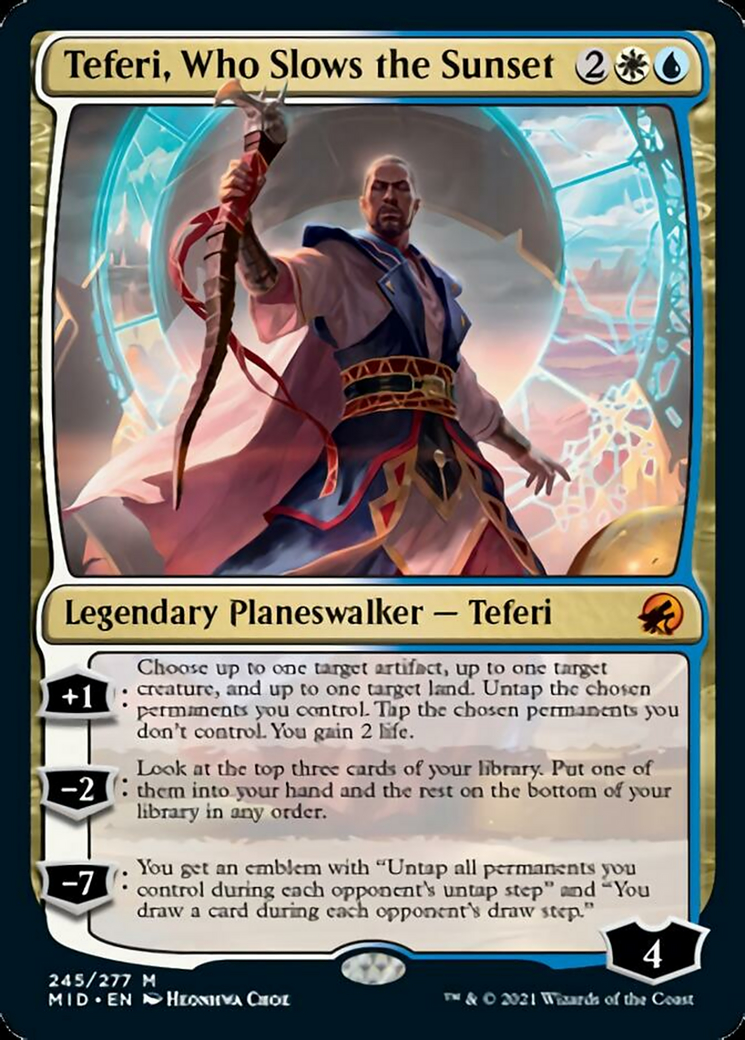 Let’s break down the abilities for this planeswalker.

I had a look at four more amazing new cards from Midnight Hunt and there are still more to come. Thanks again for reading the Daily Dose of Innistrad: Midnight Hunt. Join me again tomorrow as I look at a cycle of versatile Mythic creatures from the new set.