Welcome all to the Daily Dose of Ixalan, where today I’m going to be talking about the exciting return of Double-Faced Cards!

I am a huge fan of Double-Faced Cards. When I found out months ago that they were releasing a double-sided Playmat for Ixalan, I had a feeling Double-Faced Cards would make a return. The only other double-sided playmats released were made for Delver of Secrets and Archangel Avacyn, so I was hopeful. Ixalan did not disappoint, and transforming cards have returned, but with a unique twist!

Usually, DFCs involve transforming from the one card to another with the same type. Over time they've made it so that some Enchantments would transform into Creatures, and there was even a land that transformed into a creature in the form of Westvale Abbey. Ixalan turns all of this on its head by having multiple card types transform into lands. That’s right, players must follow a path to discover these hidden lands that are only found when certain conditions are met. Today, I’m going to be talking about three aspects of each of these DFCs. First, how good the main card’s ability is. Secondly, I’ll talk about how easy it is to transform, then finally the transformed land’s ability.

First off is a card that makes you work a little bit for a reward, but what a reward it is. Here's Treasure Map. 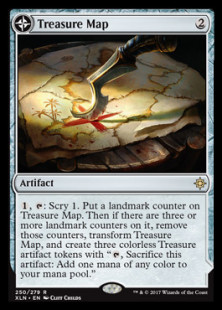 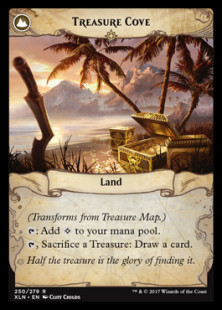 Main card ability – For the front face of the card you get an ability for one mana that allows you to Scry 1. This by itself is an average ability which will help in card selection. It does come at a cost of one mana per use, which isn’t a lot, but you might not be able to use it every turn if you want to be casting cards on curve.

How easy is it to transform? - This is one of the easiest DFCs to transform, all it takes is a little time and three extra mana over three turns. As mentioned, you might not be able to activate it every turn if you need to cast spells on curve, but either way you should be able to transform it over time.

Transformed ability/reward – So Treasure Cove allows you to tap for colourless mana, but remember, it will come into play tapped after it transforms. The main power of this card comes from what you get when it transforms. You get three Treasure tokens, which you could use for three mana of any colour right away if need be. That’s not all though, starting the following turn, you can start redeeming those Treasures and any other Treasures you've acquired to draw a card. Since this isn’t a Legendary Land, I could see this card being played in multiples to gain some serious card advantage.

Next, is a transform card that's a little different than Treasure Map in the fact that it's a large Vehicle. Let’s look at Conqueror’s Galleon. 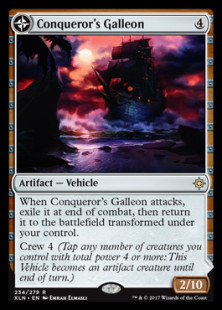 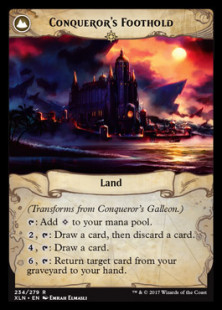 Main card ability – You get a Vehicle that, if you can crew it, becomes a formidable 2/10 creature. There are times when you will just want this to stay a 2/10 blocker that can soak combat damage instead of transforming it.

How easy is it to transform? – All you need to transform it is four power worth of creatures to crew it, and to make sure it can survive one round of combat. Be careful though, as you'll be removing a lot of creatures from being able to block that turn, which could leave you open for a counter attack.

Transformed ability/reward – Forget about one ability, you get three amazing abilities with this one transformed land. Each ability is better than the last, but each one costs more of your mana to use. Since this land uses so much of your mana, you probably don’t want to have multiples of it in your deck.

The last DFC I’ll be talking about today transforms into something reminiscent of a powerful card from the early days of Magic. Here is Thaumatic Compass. 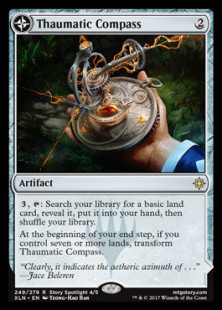 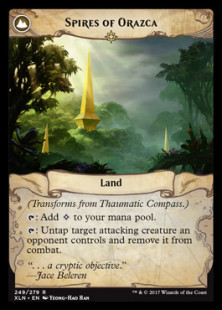 Main card ability – The good news is that you get a reusable way to get yourself some basic lands out of your deck and into your hand. The bad news is that there's a heavy mana cost for doing so. If you want to be using this in the early to mid game, you'll use up your entire turn just to go searching for a land.

How easy is it to transform? – It’s easy to transform in the fact that all you need to have during your end step is sevens lands on the battlefield. It’s interesting that you don’t even have to use the main card’s ability to transform it, as you can naturally just put seven lands onto the battlefield. You can also use cards like Beneath the Sands and Hour of Promise to speed up this process.

Transformed ability/reward – You can almost ignore the first ability of providing a colourless mana, as this transformed land has one of the most powerful combat abilities ever printed. Some players might remember a card from the early days of Magic called Maze of Ith. This is known as one of the most powerful lands as it can shutdown one attacker, repeatedly. You can use the ability after your opponent has played a combat trick, or even use it to just eliminate one of your opponent’s attackers.

There's a lot of work to get to the payout of these transformed lands, but boy are those some powerful lands. Most of these transform cards would likely work best in a Control deck, as you need time to get the most value out of them. Treasure Map is probably the card that could be used in the most decks due to its low casting cost and how few resources (other than time) you need to transform it.

What are your thoughts on DFCs so far? Thanks again for joining me on the Daily Dose of Ixalan. If you enjoy DFCs and want to see more, join me tomorrow as I continue looking into DFCs with a new cycle of rare enchantments that transform into even more powerful lands.