Welcome all to another edition of the Daily Dose of Ixalan, where today I’ll be talking about some more Double-Faced Cards from Ixalan. Yesterday I talked about some artifacts that transform into lands, but today I’m going to talk about five new Legendary Enchantments, one from each colour, that transform into five powerful lands.

Like I mentioned above, there are five Legendary Enchantments that transform into lands, so let’s start by having a look at the white one. Here is Legion’s Landing. 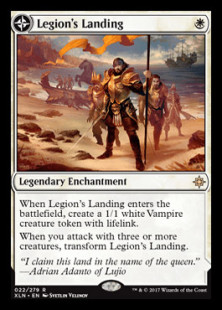 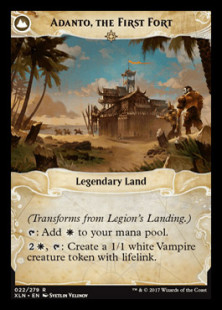 Main card ability – So for the low cost of one mana, you get a 1/1 Vampire with lifelink. This is like Sacred Cat from Amonkhet, but the key part of is that it's a Vampire. There are, and will be, more Vampire matters cards in both black and white, so being able to have a Vampire on the battlefield early that might be able to gain you some early life will be important. Being able to attack with a creature on turn two will also help you cast any two-drop Raid creatures on curve.

How easy is it to transform? – This ability to transform reminds me of Kytheon, Hero of Akros, which also needed three creatures attacking to transform. Currently in Standard, the only way you will able to achieve this on turn three is by playing Legion’s Landing on turn one, followed by Servo Exhibition on turn two (or two other one-drop creatures on turn two). Overall getting three creatures that can attack on the same turn isn’t that difficult to achieve.

Transformed land – One of the great things about these Legendary Enchantment cards compared to the Double-Faced Artifacts is that when they transform, they'll be untapped. This means that you can ramp your mana by one on the turn that you transform it. The fact that all the Double-Faced Card Legendary Enchantments transform into lands that produce coloured mana is also very significant. This land reminds of Kjeldoran Outpost which produces a creature for two mana. Being able to make a 1/1 Vampire with lifelink every turn is very good and will help in games that end up going long.

Next up is the blue enchantment that will you gain card advantage on both sides of the card. Here is Search for Azcanta. 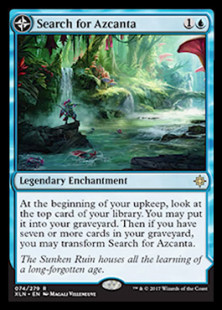 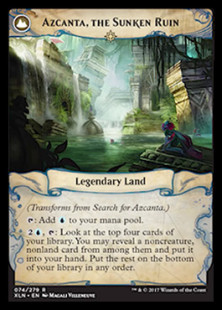 Main card ability – Just having this enchantment in play would be just fine enough for me. Being able to improve your card selection every turn by choosing whether to draw the top card or put it in your graveyard is just fantastic. There are so many ways to take advantage of having cards in your graveyard, including Embalm and Eternalize creatures, that this could see its way into God-Pharaoh’s Gift decks soon.

How easy is it to transform? – Getting seven cards into your graveyard will take a little bit of work, but not that much. Just remember how easy it was to get five cards in your graveyard to transform Jace, Vryn’s Prodigy. If you have cards that cycle it will help you achieve transformation that much quicker.

Transformed land – First off, any land that taps for blue mana is just strong. The card advantage that you can accrue from this Forbidden Alchemy / Impulse type ability will help you win the long game. I do realize that you aren’t able to get any card from it, but there are still plenty of Magic cards that you can choose from, including Planeswalkers.

Now we have the black Enchantment that can help you lose life on the front half of the card, but gain that life back on the back half of the card. Let’s look at Arguel’s Blood Fast. 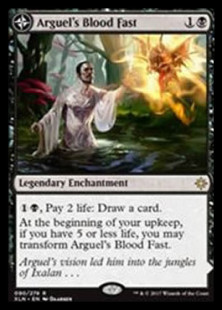 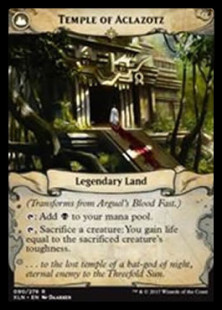 Main card ability – If any of you have had the chance to play with the card Greed, you know how powerful repeated card draw can be. There will be times on turn four or later where you will keep mana up to play a removal spell and just continue to pay life and draw cards with this.

How easy is it to transform? – Although, drawing cards at a cost of two life apiece will start to add up, it isn’t that easy to make this card transform, but that might be what you want. Being able to get the card advantage from it might be more powerful than the land it transforms into.

Transformed land – The part I like the most about this land is that you can tap it to gain life from the creature you sacrifice at no mana cost. This will allow you to do multiple plays in one turn. You can also use this to negate any removal your opponent might have as well, by using it to sacrifice your own creature for life before any spell can target it.

I would have liked to talk about the red Legendary Enchantment here, but it hasn't been previewed yet. So, when it does I'll update this article for the card.

How easy is it to transform? –

Finally, we have the green Enchantment. Here's Growing Rites of Itlimoc. 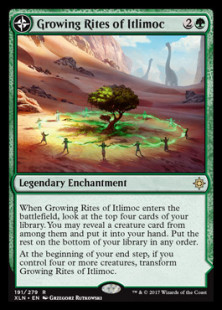 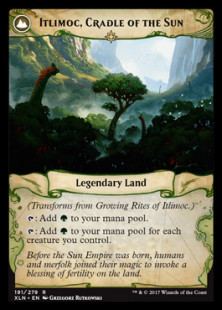 Main card ability – This is a card that you will be placing into a deck that has a ton of creatures, since you will need them for both the front card’s ability and to make it transform. Being able to loot through the top of your library and get more creatures is why we loved cards like Oath of Nissa. But at three mana, the ability isn’t the greatest, and will most often cause you to do nothing on turn three.

How easy is it to transform? – Four creatures are a lot to have on the battlefield at one time. There's a lot of removal in the Standard format, and often getting  four creatures to stay on the field is hard. The fact that they need to be on the battlefield during your end step means that it could prevent you from attacking into combat situations where a creature trade could occur.

Transformed land – This is technically, just looking at the back part of the card, a better Gaea’s Cradle. There's a lot of work to get to that point, but if you do you will be able to have a land that can tap for four mana at minimum right away.

What an amazing cycle of Double-Faced Cards that they have created. Overall, these cards seem easier to transform than the artifact DFCs I talked about yesterday. I do also like the fact they can tap for coloured mana, which makes them just that much more powerful than the lands that can tap for only colourless mana.

What are your thoughts on all the new DFCs in Ixalan? Let me know in the comments below, and thanks again for joining me on the Daily Dose of Ixalan. Join me tomorrow as I close out the week by talking about the new Standard Mana Base.