Welcome all to the Daily Dose of Kamigawa Neon Dynasty. Today I’ll be talking about the return of our favourite artifact warping planeswalker Tezzeret. Tezzeret is back in the fold and with his return comes a set full of wonderful artifacts to play and build decks with. In Neon Dynasty though, most of these artifacts will be coloured artifacts with some abilities and designs we haven’t seen before. In this set you will see artifacts come in the form of Vehicles, artifact creatures, equipment creatures and more.

To start off today’s card analysis, I’m going to be talking about the return of Vehicles. Here is Surgehacker Mech. 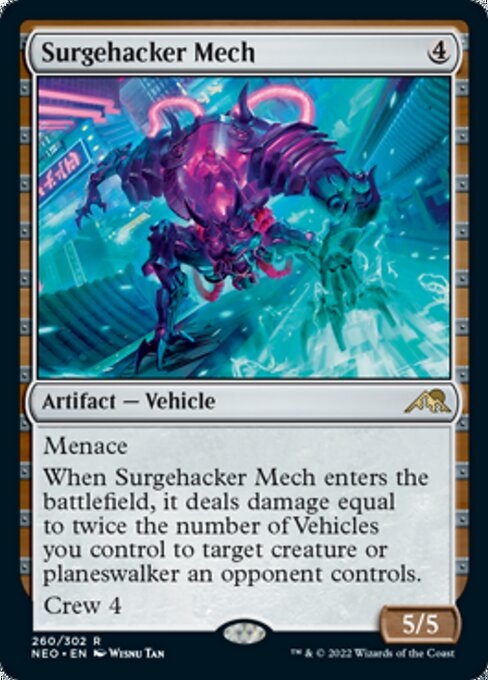 I love seeing the return of Vehicles in Neon Dynasty and Surgehacker Mech is more than just an Artifact to Crew with your creatures. This is a creature you want to have multiple copies of in your deck despite its high Crew cost of four. Just by itself Surgehacker Mech deals two damage to a creature or planeswalker. Surgehacker Mech also has evasion in the form of menace, allowing you to get in for large chunks of damage. If there are more high-impact Vehicles in the set at two or three mana value, Surgehacker Mech could start dealing four or six damage when it enters the battlefield.

The next card up is a Goblin which isn’t an artifact itself but will help you get artifacts back from your graveyard. Here is Scrap Welder. 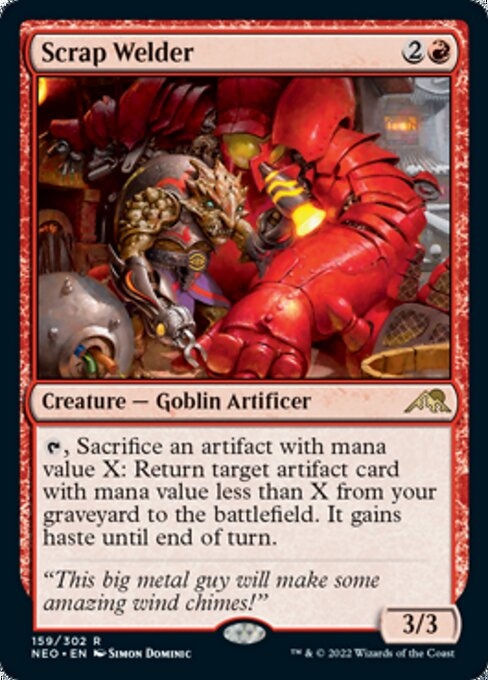 Scrap Welder’s activated ability is a wonderful way to get back some key artifacts from your graveyard. Currently in Standard, this would include artifact cards like Investigator’s Journal that can help build up card advantage. Potion of Healing can get you three more life and an extra card. You could also use its ability to bring back Treasure Chest to gain more value on a second activation. The downside to this card is that you need to have a higher mana value artifact that you want to sacrifice. The great part about it though is that Scrap Welder’s ability can be activated at instant speed making your opponent be more afraid of what resources might lie in your graveyard.

Now on to the main attraction of the evening. Let me present to you, Tezzeret, Betrayer of Flesh. 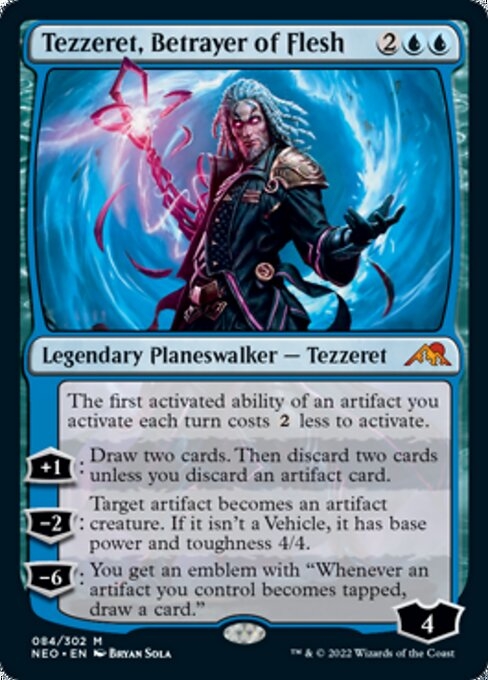 It’s great to see the return of this character that comes with a starting four loyalty for only four mana. Let’s break down the abilities for this planeswalker.

The first activated ability of an artifact you activate each turn costs 2 less to activate. – The value of this static ability will be measured by what artifacts you have with activated abilities in your deck. In Neon Dynasty there will be a ton of Equipment Creatures with Reconfigure costs that will cost less thanks to Tezzeret, Betrayer of Flesh. When it comes to current artifacts in Standard, there are a few that stand out as great candidates. Codie, Vociferous Codex will give you five coloured mana for the cost of only two colourless. One of the best uses though is with Lithoform Engine. It reduces the cost of all three of its abilities by two mana. The activation for Deck of Many Things becomes zero, allowing you to gain value the turn you cast it.

[+1]: Draw two cards. Then discard two cards unless you discard an artifact card. – This ability will help with your card selection and works even better with the card we just talked about above, Scrap Welder. Even without an artifact to discard, this will guarantee you some good card selection.

[-2]: Target artifact becomes an artifact creature. If it isn't a Vehicle, it has base power and toughness 4/4. – When I first read this ability I thought it was the usual "until the end of the turn" ability. This base power and toughness change though is permanent. This means that after it becomes a permanent creature, any Vehicle can attack without needing to Crew. This is also great at turning a Treasure token into a 4/4 threat that can help protect Tezzeret, Betrayer of Flesh from being killed.

There you have it folks, artifacts will be a key part of the futuristic setting of Kamigawa and I can’t wait to build some decks around these sweet new cards. Thanks again for reading the Daily Dose of Kamigawa Neon Dynasty and join me again tomorrow as I talk about our secretive Ninja friends.