First up is a Jellyfish. No extra explanation needed. Here is The Reality Chip.

This 0/4 two-mana creature is a great blocker early in the game. It also allows you to look at the top of your library at any time giving you extra information to better formulate your gameplay. This could help you decide which order to play your lands or help you plan out the sequence of spells. To get the best value out of The Reality Chip you will want to attach it to a creature for three mana. You can then start using the top of your library like your second hand and play any lands or creatures off the top. In the right deck, this could lead to some major card advantage and give you two-three extra cards each turn. The Reality Chip can turn any creature into an Augur of Autumn. I can see The Reality Chip having a fair chance in some decklists early in the next season as it has a chance to provide game-winning card advantage.

Next up is a flying Kirin that can prevent your opponent from winning the game. Here is Cloudsteel Kirin. 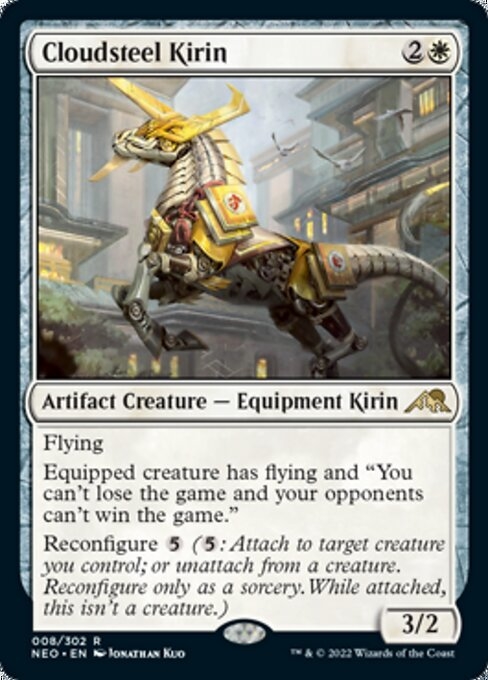 This is my favourite equipment creature design of the set. To start off you get a 3/2 flying creature for only three mana. Having this much power and evasion on a three-drop creature can help you deal some quick damage through the air. The interesting part about Cloudsteel Kirin is later in the game when you can start to equip it to creatures you control and lockout your opponent from winning. If your opponent doesn’t have instant speed removal or a way to get rid of Cloudsteel Kirin it could be game over. If we can’t have Platinum Angel in Standard, Cloudsteel Kirin will do fine.

The final card I want to talk about is an early game threat by itself that can turn into a demonic presence later in the game. Here is Blade of the Oni.

Blade of the Oni 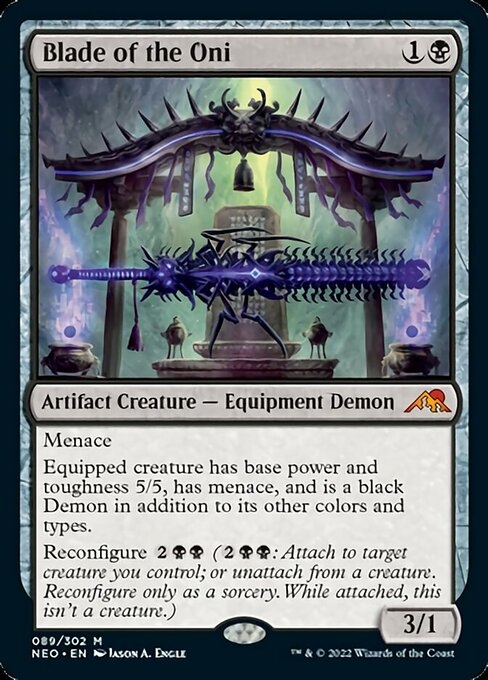 Speaking of being a creature threat by itself, check out the stats on Blade of the Oni. You get a 3/1 creature with evasion in the form of menace for only two mana. Once you can attach it to another creature, it puts a four-turn clock on your opponent. Since it only changes the base power and toughness, any other modifications that are on the creature like Auras or +1/+1 counters will be added onto its base power and toughness of 5/5.

I’m looking forward to seeing the power level of these cards and if they can have an impact. Thanks again for reading the Daily Dose of Kamigawa Neon Dynasty. Join me again next week for prerelease week as I bring out the Ultimate Guide to Kamigawa Neon Dynasty Limited and Prerelease.