Welcome back everyone to a new spoiler season for the new set coming out on July 17th, Magic Origins! I’ll be back here every day to deliver more info on the some of the upcoming cards from the new set in my daily installment of Daily Dose of Magic Origins!

I’m going to start off the Daily Dose this week by talking about some of the new planeswalkers that have been spoiled as well as another card from that color. If you haven’t heard, what they are doing for Magic Origins is telling the origin story of 5 planeswalkers in this set, and to do this they will be bringing back Double-Faced Cards (DFCs) that transform from a legendary creature into a planeswalker once they reach a certain threshold ability for that creature. Each creature/planeswalker will have a different way to transform them into the planeswalker they become.
Today, I’m going to focus on the blue planeswalker, Jace. Let’s start of by showing you the creature side of the card. 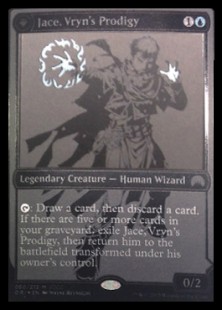 T: Draw a card, then discard a card. If there are five or more cards in your graveyard, exile Jace, Vryn's Prodigy, then return him to the battlefield transformed under his owner's control.

As you can see this is very similar to a Merfolk Looter, but with the obvious advantage of being able to transform it if you have 5 or more cards in your graveyard when you use its ability. Much like the other DFCs, this is not that difficult to kill, so you will want to make sure you get the most out of its ability, while you can. At first glance, this seems like it’s going to be one of the easier DFCs to transform, as there are lot of cards that can fill your graveyard from the Khans of Tarkir Block. Here are some cards that can help you get there, even on turn 3.

Rakshasa’s Secret – This add 3 cards to your graveyard. If you combine this with ability and a fetch land, that means transformation on turn 3.

Satyr Wayfinder – Playing this on turn 3, will not only get you a land, but if you have no other cards in your graveyard will instantly allow Jace to transform and help in your delve strategy going forward.

Sudden Reclamation – This not only allows you to get some resources into your hand, but it will fill your graveyard fast as well.

Another interesting note about these DFCs is that the transformation is a must ability and not a may ability. So if you activate Jace, Vryn’s Prodigy and have 5 cards in your graveyard, it must be transformed, but why wouldn’t you want to. That being said, let’s check out the transformation of Jace. 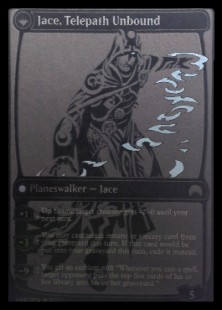 First off, if you up tick it upon first transformation, it will be a 6 loyalty planeswalker which is pretty strong to start off, plus you will be able to shut off or minimize damage from one creature coming back. The second ability is where you will get the most value, as this is basically Snapcaster Mage in a planeswalker ability. There will probably be some good targets as well if you are using a delve strategy or even a Blue/Red Control deck as well. Jace’s third ability, like most planeswalker ultimate abilities, will hardly get used, but when it does activate will end the game pretty quickly when you are milling your opponent for 5 cards per turn. So in my opinion, you will want this card for its Flashback-like second ability as the main value from this card.

Join us again tomorrow for some more Daily Dose of Magic Origins, when I preview another new DFC planeswalker! See you next time!