Welcome to another edition of the Daily Dose of Magic Origins! So far we’ve previewed some great cards, but today we’re going to focus on some of the great Green cards coming in Magic Origins, available on July 17th!
Each set, there always seems to be a new Hydra that comes with the set, with its +1/+1 counters and all that jazz. Welcome to Magic Origins, Managorger Hydra. 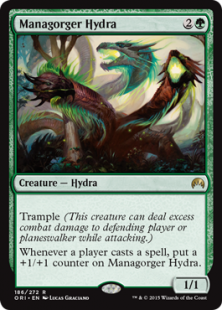 There are a couple of aspects of the Managorger Hydra that excite more than the average Hydra’s that we’ve seen in the past. First off its only 3 mana instead of being the usual X mana Hydra creature that we are used to see. You are able to get this out earlier and have it grow over the next turns. Second is the fact that it gets +1/+1 counters for both yours and your opponents spells. This can allow it to grow quite quickly over just a few turns. Lastly, unlike previous Hydra’s, Managorger Hydra has trample!
Green has always been known for its large creatures and the ability to search its library for other creatures to put into play. So why not combine both of those into Woodland Bellower! 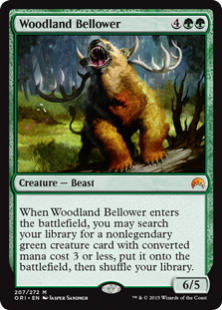 Some people are calling Woodland Bellower the new Genesis Hydra. I don’t know if I would go that far, but I do think that this card will be seeing play in G/R in the next few months. Unlike Genesis Hydra, Woodland Bellower won’t get a creature if it gets countered. Where it is better than Genesis Hydra is that you can search your entire library for a green creature, and not just the top X cards of your library. True you can only get mana cost 3 or less, but that still leaves a lot of options.
So, green has always had the ability to put lands cards from its library onto the battlefield, with cards like Rampant Growth, Explosive Vegetation, and Cultivate. If that’s not enough lands for you, you should try out Animist’s Awakening! 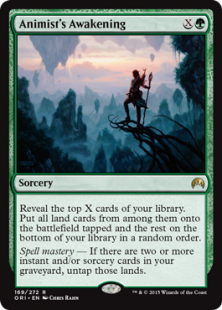 With all X spells, it had its disadvantages if you get this early game, but I believe that having X at 2 or higher will allow you get to value out of this card. Although it would be ideal to get multiple lands in play with Animist’s Awakening, getting even one land in play is good value. Early in the game, the Spell mastery of this spell, even if triggered, won’t do much good if you only get one land. Late in the game it will allow you to almost have this as a free spell, put tons of lands into play, and allows you to untap those lands to cast a spell that turn as well. The best part of Animist’s Awakening compared to the cards we talked about previously like Cultivate is that you are able to put all lands into play and not just basic lands. Getting multiple scrys or other abilities from your lands as well will be a big bonus.
The last Green card we will be previewing is one that Green players were probably wishing was around during Theros block to enable some Green Heroic decks, Herald of the Pantheon. 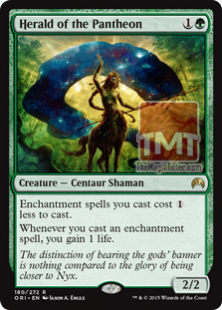 Like Hero of Iroas, this will allow all of your Aura cards to cost 1 less, but also all of your other enchament cards as well! So cards like Courser of Kruphix, Theros Block Gods, and all of the Aura’s out there as well. Getting both a cost discount and life gain will make this a valuable card indeed. It will be interesting to see if there are any decks that can really take advantage of this. It will depend on what Enchantments they print in the next couple of sets, and how they can affect the Standard metagame.

Thanks again for reading another Daily Dose of Magic Origins, and I look forward to seeing you tomorrow as we preview more cards!