Welcome all to another edition of the Daily Dose of Magic Origins, where today we will be looking at ten of the top 10 Common cards from Magic Origins. 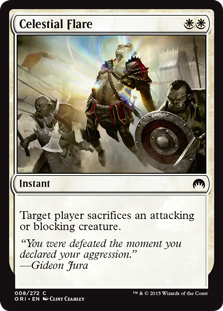 Celestial Flare is a reprint card which gives white a powerful removal card both offensively and defensively. For 2 mana it can allow you take out a powerful attacker, or a large blocker you’ve baited them into blocking your small creature with. This is a must use in all Limited formats for sure.

One-mana creature protection has always been popular for white, whether it has been Gods Willing or Apostle’s Blessing. Although this doesn’t prevent a lot of spells that the other’s protect against. It will save your creature from all damage spells and all damage from anything it blocks or is blocked by. The +1/+1 is also an added bonus, but most of the time, the main use of this spell will be the ability to prevent all damage to the creature.

Cards like Divination have been reprinted many times and have seen play because card draw is always important in gaining an advantage on your opponent. The advantage of being able to play this an instant far outweighs the fact that you might need to discard a card if you control no artifacts. In some deck strategies you might want to discard cards as well!

Cards that have enter the battlefield abilities such as draw a card, do damage, add counters, or in this case return target creature to its owner’s hand are always great to have in your deck. You can even return your own creature to get added value from it as well!

All 3 aspects of Touch of Moonglove make it a great one-mana instant. +1/+0 allows you to get in extra damage, if you put on something that’s unblocked. If you decide to put it on one of your attackers that is blocked, it not only kills it thanks to the Deathtouch ability, but will deal 2 damage to your opponent as well.

As you can see when it comes to the Top 10 commons, there are a lot of removal cards or effects. Fiery Impulse fits that bill as well. 2 damage for one mana is quite good by itself, but if you have Spell Mastery you have the chance to get 3 damage onto a creature, which in the mid-to-late game could mean the difference.

With its enter the battlefield ability, Llanowar Empath gives you 3 chances to draw a creature from it. Depending on what the top cards are you might even be able to set up your next draw step as well. Once again some good value from a creature coming into play.

Getting two cards out of your library and into your hand will allow you to make sure you are playing lands every turn to get your big green creatures onto the battlefield. The added bonus of being able to get three with Spell Mastery is nice, but even if you don’t have it, it’s still good value in the card.

There are lots of cards that take advantage of you having artifacts in play in Magic Origins. First off, Alchemist’s Vial replaces itself by allowing you to draw a card when it enters the battlefield. Than you can save it for a crucial moment when you need to stop a creature from attacking you, or getting one of your renowned creatures to be able to get through for damage.

Thanks for reading another edition of the Daily Dose of Magic Origins, and I look forward to seeing you again tomorrow!

Hey all, welcome back to another edition of the Daily Dose of Magic Origins, where today we will be looking at in no order, what I believe to be the top 10 uncommons in Magic Origins.

We have seen this card before in Black in the form of Assasinate. Not only is this one mana less, but it also allows you to have the chance to cast it as an instant later in the game.
I've always been a fan of the destroy target tapped rather than untapped creature. It allows you to kill creatures that are attacking you and getting in some damage.

There have always been lots of Counterspells that are 2 mana that have some limitation to them. Whether it be Mana Leak or Negate. This is another 2 mana counterspell that limits you to countering only a spell that targets you.
That still leaves alot of targets, especially if you are playing against a burn player. Now imagine being able to redirect that spell back to your opponent. Once again with the power of Spell Mastery this is possible.

This here is one of my favorite designed cards of the set. It's more than the typical mill card or enchantment that you will see, since it has Grindstone effect to it as well.
Not only that, but in late game you will be able to get card advantage with it's second ability.

Black has always had cards with self sacrifice abilities, and this is no different. It will allow you though to have the ability to make your opponent discard potentially their whole hand depending on what you sacrifice. Could see play in Limited formats.

In Magic Origins, they have taken a really smart approach to card draw and it shows in Magmatic Insight. A one mana, two card draw spell, means it allows you to draw better in those early turns with red burn where you've drawn more land than you need.
Since red burn decks typically only need 3-4 land to being with, discarding a land shouldn't be a problem. Look for this to be a good combo card to get Chandra to transform into Planeswalker form as well.

What did the Zendikar block do that other blocks didn't, make lands matter. This card might as well have read: "Landfall-- Put a 2/2 Green Elemental creature token onto the battlefield." , but you know, this gets around not having the mechanic actually in the set.
Maybe we can save that for Battle for Zendikar.

There are alot of creatures that produce 1/1 Thopter tokens, and making them all 2/2 with a Chief of the Foundry could be quite powerful.
Anytime you get a lord, it's powerful, but a lord that pumps all artifact creatures can be quite the advantage if you build your deck right.

With cards like Relic Seeker, the more decent Equipment cards out there the better. This definitely qualifies! For pretty cheap you can equip to give any creature a power boost, but if you need to get rid of a pesky creature it acts as colorless removal and you can sacrifice it deal 2 damage to a creature or player.
Pretty good value in my opinion. 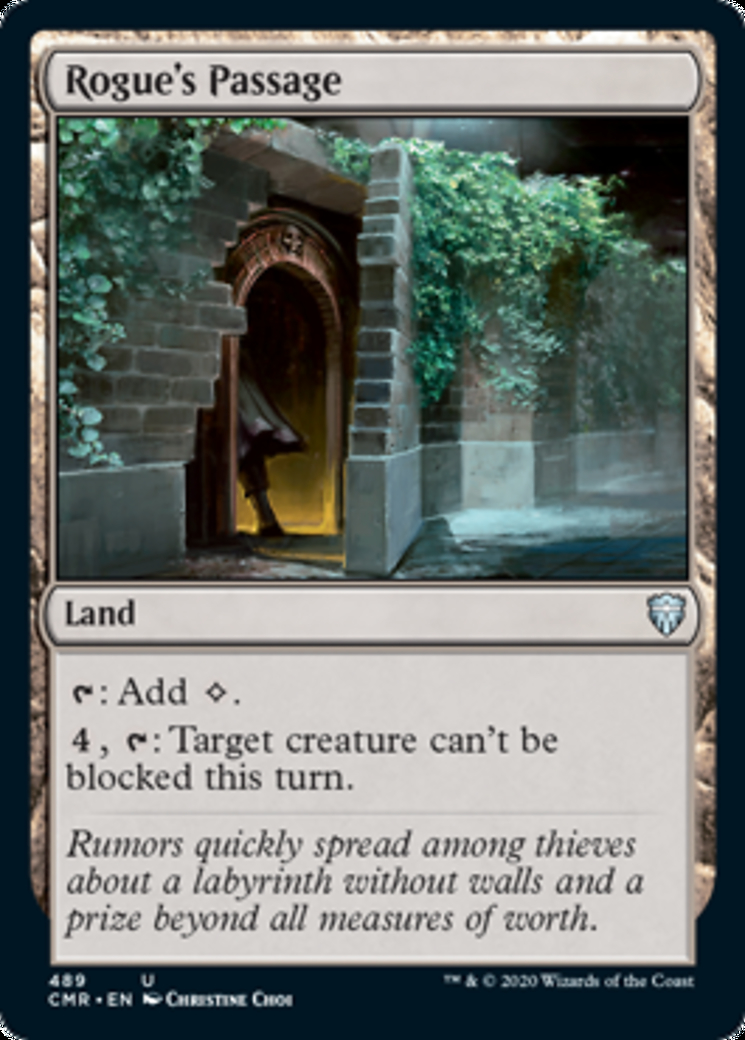 This is a solid reprint card, which will be very strong in limited formats. Being able to use Rogue's Passage to allow your Renown creatures to get damage in will be one of the stronger uses of this card.
WHen in doubt, just make a huge monster unblockable and get in for some major damage.

Thanks again for reading another Daily Dose of Magic Origins and I look forward to seeing you again tomorrow as we look at the Top 10 commons from Magic Origins! See you in stores on July 17th!