Welcome to another edition of the Daily Dose of Magic Origins, where we have previews and discussions on some of the upcoming cards from the next set coming out, Magic Origins. So far we’ve been previewing all of the
Double Faced Cards (DFCs), and today we will looking at the last of the DFCs, Liliana, Heretical Healer.

The DFCs in Magic Origins are all Legendary creatures from each of the five colors of Magic that when a certain ability is triggered causes the creature to transform into its planeswalker form. Let’s have a look at the legendary creature Liliana, Heretical Healer.

Just to start off, having a 2/3 Lifelink for 3 mana isn’t the work creature to have on the board to begin with. Compared to the other 4 DFCs that we’ve previewed this week, Liliana, Heretical Healer is the only creature to have no activated or enter the battlefield ability. It’s only ability (other than lifelink) comes when it transforms, by replacing the creature that just died, with a 2/2 Black Zombie creature.

This is one of the easier creatures to transform as you have multiple chances to put non-token creatures into play on turn one and two, thus when you cast her on turn 3, you get either free attacks into your opponent, or if they choose to block and kill your creatures, than you will get to transform on turn 3. Even if you don’t end up being able to transform her immediately, there are many spells, abilities in black that will allow to sacrifice your own creatures to allow Liliana, Heretical Healer to transform. 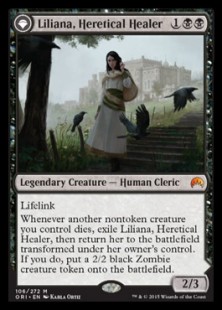 Once transformed, Liliana goes from good to bad and changes into Liliana, Defiant Necromancer! 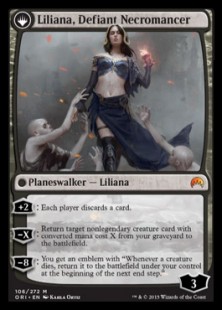 So let’s take a look at Liliana’s first planeswalker ability of making each player discard a card. In keeping consistent with the other DFCs in Magic Origins, using this ability on its first turn after transformation will leave it with 5 loyalty counters, which is a strong number to start off with. I can see this being used in both Sultai Delve strategies combining with cards like Whip of Erebos, or even just making your opponent discard some of their cards.

So you’ve used Liliana’s second ability, now what? Well why not use –X to put that creature directly into play. Maybe you can use it to put a nice Siege Rhino into play or maybe a Wingmate Roc after an attack. Maybe you’ve put some nice creatures into your graveyard from early Satyr Wayfinder, which might have also died to transform Liliana in the first place. The slight downside of not being able to target legendary creatures shouldn’t be that big of a deal, just means you aren’t able to recycle other DFCs onto the battlefield.

If you do decide to make each player discard 3 cards are more with Liliana’s first ability, you will get the chance to get a pretty sweet emblem! The fact that the emblem allows you to get back creatures from both sides onto your battlefield when they die, means it will be game over quickly if this emblem hits the table.

Liliana, Defiant Necromancer overall has a very Ashiok, Nightmare Weaver feel to it. With being 3 mana to cast, have a +2 that brings it up to 5 loyalty and a –X ability that puts a creature directly onto the battlefield. Having a planeswalker with a +2 ability can make it very hard to kill and can put it out of reach pretty quickly.
Well thanks again for reading another edition of Daily Dose of Magic Origins, and we will see you again tomorrow as we continue previewing some of the new cards for Magic Origins coming out on July 17th!