Daily Dose of Magic Origins - Oh, to be Famous!

Daily Dose of Magic Origins – Oh, to be famous!

Welcome all to another edition of the Daily Dose of Magic Origins. Now that we’ve had a look at all of the DFC Planeswalkers, let’s take a look at one of new mechanics coming to Magic Origins. The dictionary defines “renown” as the condition of being known or talked about by many people; fame. Now let’s look at Magic’s take on Renown:

Renown 1 (When this creature deals combat damage to a player, if it isn't renowned, put a +1/+1 counter on it and it becomes renowned.

This mechanic to me seems very similar to Monstrous to me, but instead of using mana to activate its monstrous ability, the only way to activate it is by dealing combat damage to a player. This in my opinion is much harder to do than spending mana, so I would expect a higher reward for being renowned, let’s see a few cards to see if that’s the case. 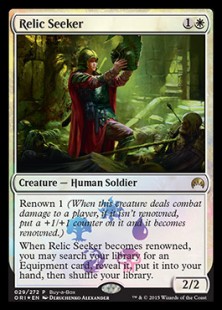 So there are a lot of Renown creatures that just add +1/+1 counters upon being renowned, and then there are some that over and above the counters, provide a triggered ability when the creatures becomes renowned. Relic Seeker is one of those cards. Some are calling it the new Stoneforge Mystic, since when you deal combat damage for the first time with Relic Seeker, not only does it become a 3/3 creature, it also allows you to search your library for an Equipment card and put it into your hand.

This card will turn out to be very played or not very played based on what Equipment comes to light in the next couple of sets including Magic Origins. As of now in current Standard, there aren’t very many good targets to choose from compared to back when Stoneforge Mystic could get multiple Swords plus cards like Batterskull. So I’m going to reserve judgment on how good this card will be until I can see what Equipment will accompany it in the sets to come. If we do get some sweet Equipment though, you will see this card being played in many Standard decks going forward. 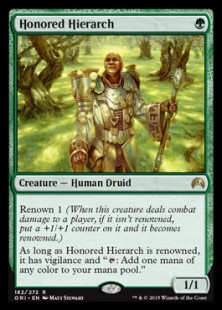 When hearing the name Honored Hierarch, you first think Noble Hierarch and when you see its ability you think of Birds of Paradise. In ways this can be a combination of both of those cards. If you are able to get his guy out on turn one, not only can you attack and change it into a 2/2 with vigilance, you will also have the ability to ramp up into any color that you need. Quite a powerful ability for a one-drop indeed. Remember all those times you have played an Elvish Mystic on turn one, and went, oh crap, nothing to play, guess I’ll attack for one. Now you want to do that with Honored Hierarch. 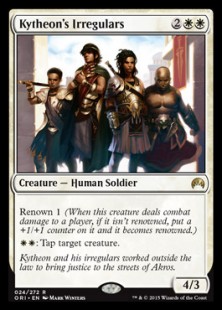 One of the big problems with creatures with Renown is their inability to get through your opponents blockers to become renowned. Kytheon’s Irregulars solves that problem and maybe even more. A 4/3 for 4-mana isn’t terrible to being with, but thanks to its reusable ability of tapping down creatures, you will be able to make this a 5/4 pretty easily. I can see this being used in a mono-white control deck that can tap down your opponent’s creatures in both an offensive and defensive way.

So, is Renown going to be a powerful new mechanic? Only time will tell, but there is definitely a possibility of some fun cards that can be achieved with this mechanic. We will have to see what the remainder of Magic Origins brings us!
Thanks again for reading another Daily Dose of Magic Origins, and I look forward to seeing you all tomorrow for some more Magic Origins previews!