Daily Dose of Rivals of Ixalan – Time to Ascend

Welcome back to the Daily Dose of Rivals of Ixalan, where today I'll be talking about a new mechanic.

Ixalan gave us a lot of mechanics to play with including Raid, Enrage, Explore, and, of course, Treasure. All those mechanics are back in Rivals of Ixalan, but they've returned with one new mechanic that revolves around players acquiring the City’s Blessing. 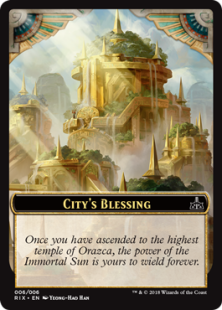 How do you acquire the City’s Blessing you ask? Well through cards from Rivals of Ixalan with the new mechanic Ascend. This mechanic can show up in permanents, instants, or sorceries.

Let’s look at one of those new cards. Here's Tendershoot Dryad: 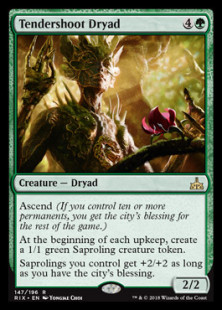 I feel that I must look at any card with Ascend in two different ways; With and without the City’s Blessing.

Next, I want to show you a Sorcery that has the new Ascend mechanic. It works a little bit differently than permanents with the keyword. It only checks to see if you have ten permanents for Ascend upon resolution of the spell and won’t keep checking the rest of the game like permanents with Ascend do.

Here is Secrets of the Golden City: 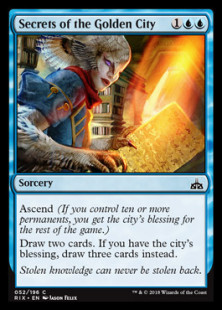 There has been plenty of variations on the blue draw two cards spells in the past couple of years. We have seen cards like Divination, Chart a Course, and Glimmer of Genius all see play. Secrets of the Golden City is the next spell in line to help you gain card advantage for blue.

This card has some versatility in that you can use it in the early game to draw two cards or, if played later in the game, it will most likely draw you three cards. To get this City's Blessing effect in a control deck, you'll need to have already acquired it, or have eight to nine lands and a few permanents on the battlefield in order to draw three cards. If you are playing a creature heavy deck like Merfolk, you might be able to cast this and draw three cards much sooner if you fill the board with those pesky Merfolk.

Lastly, I want to talk about a new rare from Rivals of Ixalan that takes advantage of the new Ascend mechanic, Vona’s Hunger: 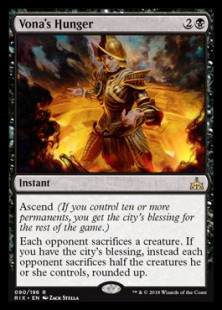 Like with Secrets of Golden City, we've seen cards similar to Vona’s Hunger in recent sets. Oath of Liliana and To the Slaughter are just two of the more recent examples.

So, what do you guys think about this new mechanic? Leave your opinions in the comment box below. Personally, I believe that there could be some great synergy if you have a deck with a lot of Ascend cards in them, but I’m skeptical that you will ever acquire that synergy in Limited. Whether or not Ascend sees play in Standard decks will depend on how many cards with Ascend they decided to put into the set.