Daily Dose of War of the Spark – Creature Decks Please!

Welcome all to the Daily Dose of War of the Spark where today I’m going to be talking about some cards from War of the Spark which incentivize you to play creature heavy decks. Not surprisingly, all the cards I’m going to be talking about are green or multicolored with green, a color synonymous with fostering creature centric decks. I have always been a fan of creature heavy decks like the Collected Company deck of a couple years ago or the current Sultai Midrange decks we have been seeing in Standard. Luckily there are some cards in War of the Spark which will help these decks grow.

First off, I want to talk about a planeswalker that gives all your creatures an ability while also being able to pump them up as well. Here is Ajani, the Greathearted. 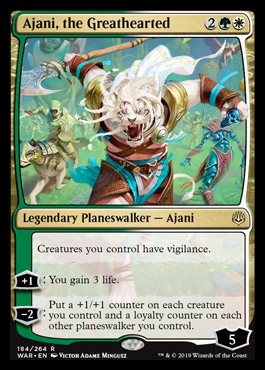 I’ve always been a big fan of Ajani cards in the past and Ajani, the Greathearted continues this great trend starting at an amazing 5 loyalty on a four mana planeswalker.

Let’s break down the abilities of this card.

Creatures you control have vigilance. – Giving all your creatures vigilance is basically a way of protecting your planeswalker without the planeswalker itself making creature tokens. It allows you to still make the same aggressive attacks you want to make without the fear of Ajani, the Greathearted dying the following turn from a counter attack. This also makes convoke cards like Conclave Tribunal and Venerated Loxodon that much stronger.

[+1]: You gain 3 life. – Gaining 3 life per turn on a plus planeswalker ability is quite strong. Team that up with cards like Ajani’s Pridemate and you’re laughing. You can also combine this with Dawn of Hope to draw a card for two mana. This ability also gets you that much closer to making Resplendent Angel give you a 4/4 Angel.

[-2]: Put a +1/+1 counter on each creature you control and a loyalty counter on each other planeswalker you control. – Imagine the current Mono White Aggro deck that splashes green for Ajani, the Greathearted and can put +1/+1 counters on each creature for two turns in a row. One thing to remember is that all these creatures with also still have vigilance thanks to its static ability. That could be game over right there. The addition of loyalty counters to other planeswalkers is a welcome bonus.

Next, I want to show you what looks to be a card from a cycle of colored artifacts from the set, each connected to a character in the storyline. Here is Vivien’s Arkbow. 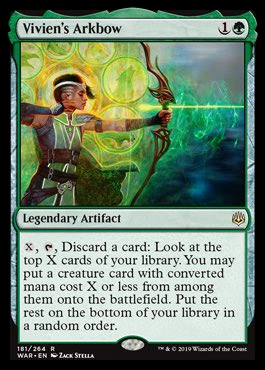 What a great card! The first deck that I think of using this card in within the current Standard metagame is Sultai Midrange. Most of the time you are tapping out your mana during your turn to cast your spells, leaving you vulnerable to what your opponent will do during their turn. This will allow you to leave up your mana and use your unused cards as a resource to get a creature onto the battlefield from your library. The best thing about Vivien’s Arkbow putting creatures onto the battlefield is that it gets around counterspells. It is a bit of a nombo (non-combo) with a card like Hydroid Krasis, but it will have successful hits for most of the deck.

Finally, I want to talk about another returning planeswalker that would also fit well into the Sultai Midrange deck. Here is Vivien, Champion of the Wilds. 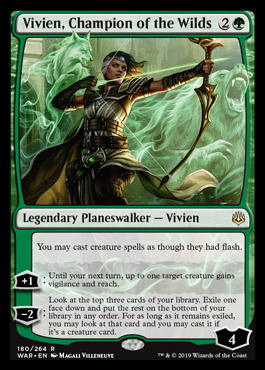 Another strong loyalty count of 4 on a three mana planeswalker. It’s also rare for such a cheap planeswalker to have only one colored mana in its mana cost, allowing it to be splashed in a few decks if needed.

Let’s break down the abilities of this card.

You may cast creature spells as though they had flash. – Like Vivien’s Arkbow, this ability gives you the versatility to cast your creatures whenever you want. They can still be countered, but it will make it harder for your opponent to deal with a large Hydroid Krasis cast at the end of their turn. This would allow you to have a handful of cards to cast during your turn.

[+1]: Until your next turn, up to one target creature gains vigilance and reach. – This is the weakest of the 3 abilities but this ability can have its good spots. It does gain loyalty and will allow some of your ground creatures to be able to block any potential annoying flying creatures like Thief of Sanity. This is very much a defensive ability, but some turns you will just need to use this ability with nothing else to do.

[-2]: Look at the top three cards of your library. Exile one face down and put the rest on the bottom of your library in any order. For as long as it remains exiled, you may look at that card and you may cast it if it's a creature card. – This is a mini version of Vivien Reid’s ability. The advantage to this ability is that the card doesn’t go in your hand and your opponent doesn’t know what card you’ve exiled. It could be a sweet creature, or it could be a whiff like a land. Also, you will be able to still cast the card even if Vivien, Champion of the Wilds is removed from the battlefield.

There you have it, three great cards for creature decks in the upcoming Standard metagame. All we need now is some sweet creatures in War of the Spark to help us unlock the potential of these cards. Thanks again for reading the Daily Dose of War of the Spark. Join me again tomorrow as I finish off the week with a look at 3 planeswalkers that we’ve never seen before.