Daily Dose of Theros Beyond Death #9 – No Escaping This Power

Welcome all to the Daily Dose of Theros Beyond Death. Today I’m going to be talking about some cards with the brand-new Escape mechanic. This is a flashback like ability with a twist. Escape allows you to recast a spell from your graveyard by spending a different amount of mana than its casting cost (usually more) and by also exiling a certain number of cards (varies per spell). The interesting part about Escape cards compared to flashback though is that it Escape doesn't exile. This means if that spell ever ends up in your graveyard again, you can do it over again. Another great thing about Escape cards is that they can be any type of spell: From an instant to a creature and even a planeswalker.

First off, I want to talk about a creature that you want to be casting with an empty hand. Here is Ox of Agonas. 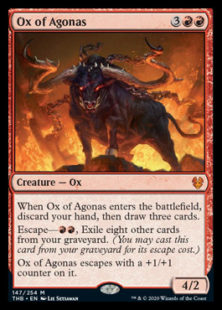 The ability of discarding your hands and drawing three cards can be very powerful in the right deck and Ox of Agonas is looking to utilize that ability again and again. We have seen this ability in cards like Bedlam Reveler and most recently with Rix Maadi Reveler’s spectacle casting cost. Red has a way of emptying their hand quickly, so the drawback of discarding your hand when this enters the battlefield is often negated. This means most often for five mana you are getting a 4/2 creature and drawing 3 cards for 5 mana which is quite strong. Later in the game it acts to refill your hand again. Because you are exiling eight cards to pay its Escape cost, there is a good chance you will only be able to cast it for its Escape cost once in a game, so don’t expect to get repeated value with one particular Ox of Agonas. It is nice that if you do pay its Escape cost it comes back as a 5/3. It’s a little extra value that makes this card even that much better.

Next is a creature that brings along a little sacrificial friend along every time it enters the battlefield. Here is Woe Strider. 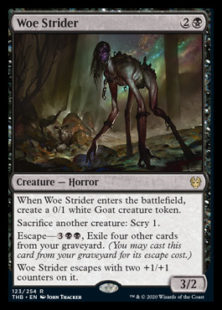 First this card should have been called Goat Strider. There are lots of part to talk about on this card, so let’s dig in. To start off you get a 3/2 creature and a 0/1 Goat for three mana. This is solid, but that Goat will come in handy later. The key to this card lies in its ability to sacrifice another creature to Scry 1 for zero mana. That’s right, a repeatable way to sacrifice creatures. Is having a zero-mana way to sacrifice creatures so rare these days? Yes, it is! There are currently zero other cards in Standard that allow you to sacrifice multiple creatures in the same turn without spending any mana. This is great in a world of cards like Mayhem Devil that can allow you to get extra value anytime you sacrifice something. The next two parts of the cards blend nicely, and it evolves its Escape cost. Its Escape cost raises to five mana, but only has a reasonable four cards that you need to exile to be able to cast it again. The best part of that you get yet another sacrificial Goat on the battlefield and Goat Strider, sorry Woe Strider becomes a 5/4 instead of a 3/2 creature. There is a lot of potential for this card as we have seen combo decks in the past with similar cards like Viscera Seer.

Finally, a card that gives other cards Escape. Here is Underworld Breach. 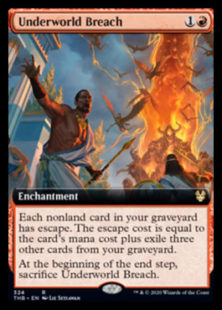 Say hello everyone to the new red Snapcaster Mage! Or is the red Yawgmoth’s Will? This card is being called many things; I just call it fantastic. Does it have the same power level as those two cards, maybe. Does it have the possibility in certain formats to be better than those cards, I think it does. The part that makes this card have the potential to be so powerful is that when you cast any spell for its Escape cost it doesn’t get exiled like it does with Snapcaster Mage, Yawgmoth’s Will or Past in Flames.  This could allow you to cast Shock over and over gain for one mana and 3 cards in your graveyard.

Chamber Sentry and Stonecoil Serpent both can cost 0.  We'd just need a dying trigger and we’re in business. With Cruel Celebrant, each time you cast it, you'll drain your opponent 1 life. With Judith, the Scourge Diva, you can ping any target for 1 damage. One of the best uses would be with Midnight Reaper as it would allow you to draw a card for each time you cast the 0 casting cost creatures.

How about casting cards that refill your graveyard allowing you to cast even more spells for that one turn? Any spell with Surveil will allow you the chance to add cards to your graveyard. Possibly the best spell though is Emry, Lurker of the Loch. You have the chance to possibly cast it for only 1 mana and it adds four cards to your graveyard every time you cast it! Another neat trick is Escaping cards like Woe Strider using Underworld Breach. It gives you a cheaper Escape cost, but you still get the benefit of two +1/+1 counters on it.