Last time, we discussed how you could become a better player by just making a few changes to your game. Oh wait I'm having Deja vu... in our last article we actually covered the first part of the combat phase, attacking. If you haven't had a chance to read that piece, please click here to read it and then come back.

Okay, so today we're talking about blocking, the only way to keep yourself alive. 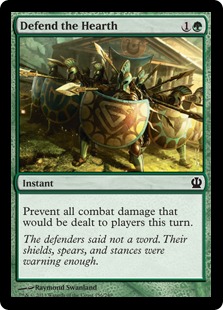 Let's jump right in with a scenario:

Your opponent: Grizzly Bears (tapped and attacking) in play, no lands untapped, no cards in hand, 20 life

[toggle title="Click here for the solution."]
This is the simplest scenario and yes you should be blocking here because your opponent would just lose his creature, since he has no cards in hand.

That was pretty simple right? Well, this isn't something that you should get used to because you'll probably have this happen once in your life and then your opponent will ask for a take-back because they didn't see your guy... the real question is, will you let them? 😛

Let's add some complexity to it.

Even though this looks like the scenario above, there's a massive difference since they have a card in their hand. If you block and your opponent has a combat trick, this would be a bad block. If you don't block, and your opponent plays a 4/4 then it was a bad non-block. When this situation occurs, I'd really consider who I'm playing against to understand whether or not they'd be making a bluff attack or not. If I'm unsure, I would lean on the side of non-blocking because the downside risk of being wrong is much lower in this situation.

However, I want to bring your attention to the act of "balancing your range". If your opponent makes a certain play and you always respond a certain way, it becomes highly abuseable by them. If I was the opponent and I sensed that you would never block in this scenario, then if I had a creature to play post-combat, I'd always attack here with my Grizzly Bears because I'd know that you wouldn't block. Even if you aren't blocking most of the time, you should block one in every 4-5 times so that it doesn't let your opponent abuse this.
[/toggle]

Even though this looks like the scenario above, there's another massive difference. Your opponent is at a much lower life total than you, allowing you to get into a race situation. By not blocking you put yourself into a race which will take you 3 more turns. Your opponent will need more than just a combat trick to be able to outrace you here. I would not block in most situations (remember, balance your range!).
[/toggle]

You: 4 Grizzly Bears in play, no untapped lands, no cards in hand, 3 life

Do you block here?

Oops, I got ahead of myself again.

If you don't block, you die and that wouldn't be a great outcome. So, how do you block?

The first possibility that you should rule out which a lot of newer players would lean toward is chump blocking with one of your Grizzly Bears. This would put you down a card and you'd have no real way to win a race since your opponent is at 20 life.

However, while it is tempting to only block with 2 Grizzly Bears, in this situation I would recommend blocking with all four creatures. Why?

Well, your opponent has 2 cards in hand and we want to make sure that even if they have a pump spell and a removal spell that you're able to take down the Hill Giant. In the best scenario, they have nothing in hand and trade their Hill Giant with the Grizzly Bears, but this happens regardless if you block with 2 or with all 4. By blocking with all 4 you are not only sending a message, but you reduce the combination of cards that will let them walk away with a Hill Giant.

Let's add spells to the mix.

What do you do here?

I know that many of you would want to cast Terror first to see what happens. However, if they had a way to stop Terror, in the way of a Cancel or any similar effect, you would block anyways.

In this situation it's better to block first, because this doesn't give your opponent the green light to remove your creature after they've gotten you tapped out. Once you've blocked, then you can cast the Terror, and if it resolves your Wind Drake will still be alive.

What do you do here?

Once again, many players would want to cast a Terror first to see what happens. However, in this case you are offering a trade for the Serra Angel. By blocking first, you're letting your opponent cast any spells they have, since they have priority first. If they were to cast a Healing Salve or any pump spell, you could then cast Terror in response. This lets you have last action and you always want to set up reasonable blocks before casting your spells so that you can get spells out of an unwary opponent.

When deciding your blocks, make sure you consider the following:

Of course, there are definitely a lot more complexities than what I mentioned in the scenarios above. This article is to give you a baseline understanding that you will adapt to the various intricacies of a format. Next week, we'll be taking a break from this article series to focus on Amonkhet Limited since it's now available on Magic Online and in Paper Magic.

Post in the comments below or tweet at me (@SammyTMTG). And, if you want to keep up with my articles and happenings, please make sure you hit the follow button for Twitter @ SammyTMTG. I’ll see you next week for another article on improving your magical skills!

Until then, have a great weekend!