Going for the Gold: My Origin Story, Part One

Every week, I write an article that ends up being either about the state of a current format, or on how the reader can improve their skills.

But for the last few months, something has been bugging me. I'll walk by players at events and hear how they view the competition the game has to offer as the most incredible thing they've ever had the chance to witness. They think that getting on the Pro Tour will solve all of their problems. Some are even waiting for their breakthrough so that they can stop going to school and join their, "calling in life". Now I'm not saying that any of the former is false, but as you should know, there are always two sides to every story.

My Introduction to the Game

I  was first introduced to Magic in high-school. Like many people who have come to play this game, I had a very tight friend group that didn't interact with the coolest kids in school. This game was kind of like our escape from reality. I remember the first time I walked into our lunch period and saw a few of my friends playing. These were the same people who were good at other board and video games, and they were engrossed in the game.

During that era, I was more into online games such as Neopets and Cashwars, but my FOMO (Fear Of Missing Out), encouraged me to watch them play, and I eventually ended up buying cards from my local store (Comic Connection in Oakville). I was only 15 at the time, but I was about to graduate from grade 12 in a few months.

The last few months of school were a blur. I was the worst player in our group and whenever we played on our "kitchen tables", I would be the first to lose.

For the first few weeks of playing, since I joined during the release of Legions (the first and only creature-only set), I had no idea that there were spells in the game. I remember seeing Searing Flesh for the first time and thinking that it must be an amazing card, considering that we only started with 20 life. I could never seem to cast it though, and when I finally did it immediately got Force Spike'd. Those were lessons that stuck! 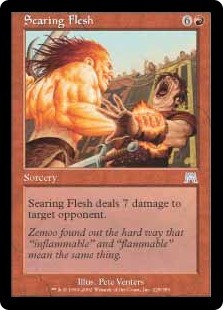 Magic Online eventually became accessible to my friend group, and I would recluse myself and spend months and months playing there before I was finally the best in the group. Then we all graduated and, for the most part, went our own separate ways.

Transitioning from Magic Online to Paper

After graduating from high-school, I didn't really play Magic until my second year of university.

I had just gone through a breakup at the time and I wanted something to dive into as a distraction. I remembered how good the game was and started loading up Magic Online. Back in the day, they had Premier Events that fired every so often and you could actually draw. This replicated a lot of what is seen in real life tournaments and I quickly became known as a regular grinder on the online circuit under the handles "LankanProdigy" and "CyborgKurochan".

We didn't have trophies back then, but if you did well enough you won packs for your clan. I was part of "DRAGONQUEST" which was led by Dr. Cabal. If you didn't do well enough for a long period of time you got demoted to their sister clan "White Dragon". Of course, if you were about to ship a tournament, you got a temporary invite so that the packs counted for DRAGONQUEST. 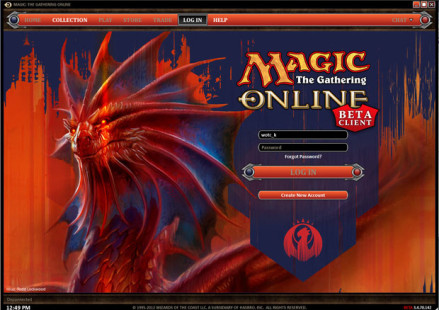 One day I was chatting online with my clan and they told me that there was a tournament called Regionals taking place at Agincourt Community Centre (Scarborough, Ontario). The Top 8 of this tournament would end up qualifying for Canadian Nationals. I had been taking down a bunch of Standard online events with Arc Slogger Red (Mirrodin Standard) and was confident that I could do well in the tournament.

I never really played in real life anymore so this was a relatively new experience. I had only occasionally showed up to my local FNM. Playing in real life Magic was very different than I expected; Not only did you have to interact with opponents, but there was a lot of shadiness since this was during a time when cheating was widespread. My round five opponent (who was apparently known to be a cheat/thief in the community) actually broke my sleeves on purpose during shuffling and was able to trick me into revealing a card. I would have gotten a game loss if I didn't have lethal burn in my hand to win on that turn.

I lived at home during this period of time, so money was definitely a big incentive for me. When I walked into the venue in the morning I was convinced into selling all four of my Pithing Needles for $20 each prior to the tournament. I replaced them with Wand of the Elements as another way around Circle of Protection: Red. This would end up coming back to bite me as I lost to CoP: Red twice in the last two rounds to finish 6-2 and outside of Top 8. 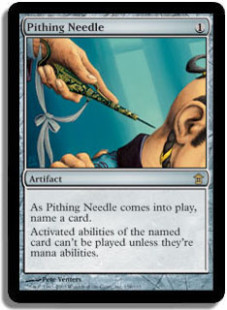 Playing in real life was a lot more fun, and a much more social way to play the game.

Everyone who has risen up the competitive ranks has first become one of the best players in their store. My store of choice was Untouchables and they ran a weekly Draft every Friday night. I started attending their Ravnica drafts and eventually befriended a lot of the locals, but the environment was very toxic for me at first.

Players were surprised to see someone new come to their store and beat them. I would get berated constantly and they assumed I either got lucky or cheated since there was no way "some random" could beat them. Once you beat them consistently for a long time and point out the mistakes they make that cost them matches though, they tend to want to make you their friend instead.

During this time Michael Ferneyhough, who was the best player at the store, had qualified for his second Pro Tour. He used to bring in his friends every so often, and we were all pretty much on a similar same skill level. I found that I learned so much more when playing against that calibre of player as opposed to the regulars at FNM. This made me want to seek out tougher competition, since winning a few packs every Friday night was not really the best investment of my time. However, I did love drafting and I found the game to be so enjoyable and fun that I didn't mind spending my Friday playing.

Grand Prix Toronto happened in the summer of 2005 and I still remember it so vividly. This was before I played PTQs, so it was my first big competitive tournament and I was very nervous! I got a pretty subpar pool, but what else is new?

I went to my seat for round one (yeah, I didn't have any byes) and found two players sitting in them. I'd checked the seating twice so I was confused, and asked both players who had started playing prior to the round. They both swore up and down that they were sitting there so I called a judge who confirmed what I thought... one of those players had it wrong! So we get back and the player who I was suppose to face tried to get me a game loss since I showed up late, even though I was early and someone else screwed up. The judge didn't let this happen, but the player kept being rude during the match.

I wish I could say I'd beaten him. That would have made this story better, but his deck was much better than mine and I got crushed by Moroii. 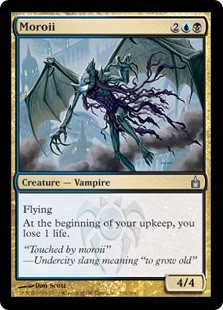 I won the next two rounds and then played against a Temur deck. He had multiple copies of Vedalken Dismisser and he frazzled me so much that I accidentally placed the card he Repeled into my hand twice. I could tell he was extremely frustrated with how sloppy I was playing and I can only blame the nervousness because I knew better. I can't remember why, but I chose to drop at 2-2 and play some side-drafts instead.

I really liked the competition that Grand Prix offered and wanted to prepare more for my next one. 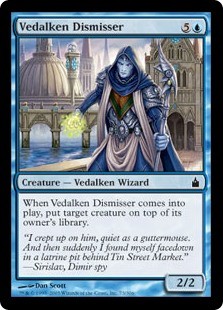 Tune in next week to read part two!

Let me know if you liked this article by posting in the comments below, or tweeting at me (@SammyTMTG). And, if you want to keep up with my articles and happenings, please make sure you hit the follow button for Twitter @ SammyTMTG. I’ll see you next week for another article on improving your magical skills! Until then, have a great weekend!