Going for the Gold: When should you call a judge?

Last weekend was Grand Prix Montreal, also known as the Spinning Wheel Grand Prix, and I had one of the most unfortunate situations happen to me.

This has inspired me to write this week's article since I learned a valuable lesson, one that I should have known already. 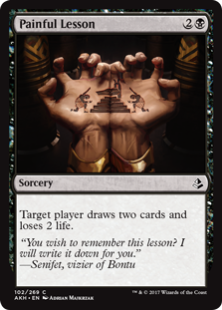 The Friday before the Grand Prix, Rob Lombardi sends me his list of Aetherworks Marvel and since I trust him, I adjust my deck to be more in line with his 75 cards. It's pretty clear that Marvel is the best deck in the format and based on what I heard from other pros, this card fundamentally does things that should not be allowed in Standard.

Like really, who ever beats a turn four Ulamog?

The problem with Marvel, is that it's all set-up to get into a situation to hopefully hit a good card on Aetherworks Marvel. Whenever you hit an Attune with Aether etc., you feel like you just got punched in the gut.

Either way, it was the most powerful thing you could be doing, so it would be foolhardy not to play the deck. This was demonstrated also when the finals of the Grand Prix was an Aetherworks Marvel mirror.

I'm sure everyone else will write articles on how to play Marvel, so I won't focus on the game play.

I started off the tournament by completing my three byes, and people watching before losing a close mirror match versus Matthew Dilks (one of my teammates for GP Cleveland, and one of the best players on the Grand Prix circuit without a Top 8). Now that I was 3-1, I won my next three rounds and got to 6-1. In Round 8 I play Max McVety, who eventually Top 8s the Grand Prix, and he crushes me in two games where I don't cast an Aetherworks Marvel or Whirler Virtuoso. Max lamented my horrible draws, but I figured it was pretty standard.

For those of you paying attention, I am now 6-2. Locked for Day Two, but since I've used all of my Grand Prix spots there was no way that I'd be playing Day Two if I was 6-3 going into it.

In Round 9, I played a local player who seemed to be pretty new to the competitive scene. Of course, we were playing a Marvel mirror and after Censor'ing his turn four Aetherworks Marvel, I had four spins miss before my opponent cast his second Marvel and Ulamog'ed me out on the first try. Even more frustrating was that I kept hitting Glimmer of Genius and the top card of my deck was always Ulamog, the Ceaseless Hunger which I would have to send to the bottom. By the time we got to shuffling up for game two, I realized that we had taken 25 minutes for approximately 10 turns.

Now, I'm a really fast player and I tend to play faster than I should, so at this moment I told my opponent that we only had 25 minutes left and that we should pick up the pace for game two. He apologized and said that he didn't want to make any mistakes so he was taking his time.

Game two is a grind fest and I use my Tireless Trackers to create a massive advantage over my opponent. At this point, I'm playing super fast because I don't want a draw, and it's equivalent to a loss for me. I continue to prod my opponent to play a little faster, and he'd take a couple minutes every turn on deciding whether or not to block but then try to rush through blocking super fast to try and make me make a mistake (by not sacrificing Clues to save a Tireless Tracker). At this point, a Judge comes by and continues to ask my opponent to play faster.

I had shown him my hand on multiple occasions in an attempt to get the concession (he had no outs for many turns). My opponent is able to get us down to six minutes left on the clock, before he finally concedes. While the last minutes of game two were ticking down, I realized that I would have to rely heavily on the Marvel plan to win game three since we would never finish a game in that short of a time period. I quickly re-sideboard, present and start playing at hyper speed.

Because of the timing situation, I now have to play very aggressively so that I can squeak out a win. I had two Negates in hand, but I had to cast a second Tireless Tracker on turn six and let myself be at the mercy of my opponent since otherwise it would most likely be a draw. Of course, my opponent plays an Aetherworks Marvel and is able to Negate back, spins the wheel, and summons Ulamog, the Ceaseless Hunger exiling both of my Tireless Trackers. While he tanks while deciding what to exile, time is called and we will have to go into extra turns, which gives me turn one, three and five.

Of course, this was what I expected. I cast my own Aetherworks Marvel, and played a spell to gain the last energy I needed. Then I paused, cycled a Censor and drew a Rogue Refiner before spinning the wheel. Ulamog, the Ceaseless Hunger ended up being the sixth card and I felt like a genius. I was able to take over the game by removing my opponent's Marvel and Ulamog. However my opponent played a Whirler Virtuoso, made a few Thopter tokens to chump block, and we ended up game five with zero cards in his library. So here's the paraphrased conversation that took place:

Me: "I was going to win this game if we didn't run out of game, would you mind conceding as a draw is the same as loss?"

Opponent: "No. I would usually do it, but I could win."

Me: "You have zero cards in your library, if the roles were reversed I'd concede. I even played faster to make up for the time that you took."

Opponent's Friend: "Well, you should give him the win if you're going to drop."

Me: "I'm not going to reward that kind of behaviour, so thanks."

I was very tilted at the result of the match since I literally felt like I had to adjust my game play and take multiple risks because my opponent was playing very slowly. However this is entirely my fault, since I never once called the judge on my opponent, despite having the right to do so. This has happened to me three times in the last 10 big tournaments that I've played and each time I was hesitant to call the Judge. Every single time, I received an unintentional draw that has taken pro points away from me as a result.

It's so hard to call a judge sometimes because it seems like a really mean thing to do to someone, and we're in a culture where it's typically frowned upon. However, this is your way to safeguard yourself from potential abuse.

When Should you Call a Judge?

1) Whenever you feel like your opponent is taking advantage of you.

This could involve them trying to use the clock against you. Now, don't get me wrong, the majority of players who are playing very slow aren't trying to do this this. But if you're playing competitively, the moment that someone takes an inordinate amount of time in your match puts an undue pressure on you to make up the time. That isn't even close to being fair. I think that if your opponent is playing somewhat slow, you should always give them the benefit of the doubt with a slight prod. But if they continue to play slowly just call the Judge and ask them to watch the match.

If your opponent is misrepresenting their game state or telling you inaccurate information? That's also a way that some players choose to take advantage of their opponents.

2) If you think your opponent drew an extra card

Now, I'm not saying that you should accuse your opponents of cheating. But always be wary of how many cards they should have in their hand. Some players try to complete multiple game actions at once, or will cast a Brainstorm and just put a bunch of cards in their hand. Make sure that they slow down and count the cards on the table before placing them in their hand to prevent any sort of "mistakes".

3) Anytime you want an impartial ruling

Sometimes, you'll have an interaction that occurs. Your opponent. being as helpful as always. explains to you that it works a certain way. If this doesn't sit right with you, or you just want to double check, there's no problem with calling over a Judge to verify. I've had multiple situations in my past where a Judge told me the exact opposite of what an opponent told me. Remember, your opponent also wants to win, so they're incentivized to mislead you.

4) If your opponent is being aggressive

Magic players tend to be very passionate, but if someone takes their frustration out on you and you find it bordering on verbal abuse, please just do everyone a favour and call over a Judge. At the minimum they'll ensure that this player will leave you alone. Some players think that rattling their opponents is a great way to tilt them and get an advantage in the match. Don't let them do that to you!

Let me know what you think by posting in the comments below or tweet at me (@SammyTMTG), and if you want to keep up with my articles and happenings, please make sure you hit the follow button for Twitter @ SammyTMTG. I’ll see you next week for another article on improving your magical skills!