This is going to be a deep dive into one of my decks in Pioneer that I’ve been playing for a few weeks. I'll be honest the deck is a lot of fun and can most definitely win, but I wouldn’t classify it as tier one.  For my first article, we're going to talk about my Emry Ascendancy version of Jeskai Ascendancy. 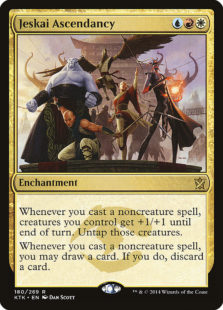 First let’s talk briefly about the archetype if you aren’t already familiar. Jeskai Ascendancy is a powerful three mana enchantment from Khans of Tarkir. The deck has had many iterations over the years including a standard and a modern list I have experience playing. The list I’m going to be discussing is the third version of the deck.  The game plan is to have the Jeskai Ascendancy on the battlefield as well as multiple creatures that tap for mana in order to chain draw and non-creature spells while untapping until your creatures have reached a critical mass of power and then swing for lethal.  So let’s go over the creatures in my deck. 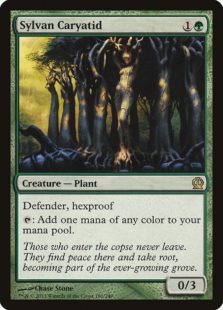 Sylvan Caryatid is a 0/3 defender hexproof for 1G that taps for one mana of any colour. This is a pretty self explanatory include in the deck. It fulfills the tapping for mana necessity, and having hexproof to protect itself makes sure it a protected combo piece. In the past, the modern list has played a combination of Birds of Paradise and Noble Hierarch. But without 1 mana creatures to generate mana, protecting the mana dorks you have is important. I have looked at Gilded Goose as a possible inclusion in the Ascendancy deck. But without a regular ability to create food it just doesn’t get the job done. 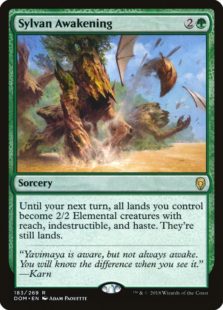 You’re probably saying "Wait, this isn’t a creature!"  You are absolutely correct. But in combination with Jeskai Ascendancy this is both your win-condition and the ability to create multiple mana creatures all in one.  Without a plethora of mana dorks in the format this archetype needed to redefine itself. Sylvan Awakening animates your lands making them 2/2’s with reach and indestructible until your next turn. In combination with Jeskai Ascendancy and a draw spell it makes a powerful combo.

Dig Through Time, Opt, and Treasure Cruise are the traditional draw spells in the deck. Once you have your mana creatures and Jeskai Ascendancy they will do the bulk of the work so that you can keep digging through your deck and reach your end goal.

Now onto the spice of my deck list, the Emry, Lurker of the Loch package.  In my first two versions of the deck I played all in as fast as possible combo versions.  After a few weeks of playing I realized the format was fast but not as fast as I first imagined when I decided to build this deck.  I realized if I removed a package for anti control and anti combo that I would have space for a more flexible package. At this point I came across the decklist I have now, thanks to Dwarshadow and their decklist from mtgtop8. (Obviously this is before Veil of Summer was banned.  So I added 2 Saheeli, Sublime Artificer. I also took out 1 Swan Song and added a Jace, Wielder of Mysteries.)

It had a very interesting Emry package. It consists of Emry, Mox Amber, Witching Well, Prophetic Prism and Expedite. The package allows for “snap win” with Jeskai Ascendancy, Emry, and two Mox Ambers. You will cast one Amber, float U, cast the second and trigger Ascendancy drawing and discarding, and untapping Emry. Then, casting the second Amber from your graveyard.  Even without drawing and discarding this will generate infinite blue mana and making Emry infinitely large. With Witching Well to draw extra cards and Prophetic Prism to change some of that blue into white, red , or green you are good to utilize any other resources in your deck you need and get that game win. But on top of the “snap win” this artifact package allows for flexibility within early game advantages while being able to set up a more secure and stable-to-removal route to victory. 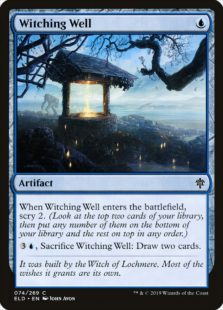 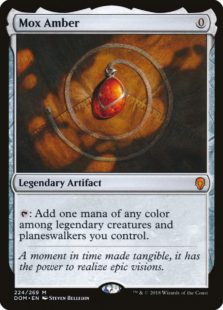 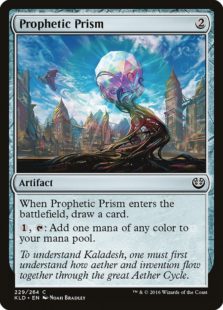 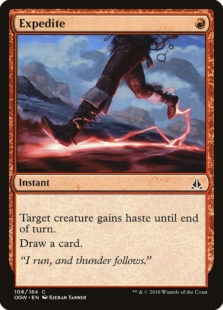 Witching Well’s enter the battlefield trigger is a key turn one play in this deck.  Setting up your next two draws or preventing flooding or drawing dead is irreplaceable.  As well, being able to sacrifice it to draw two cards in your opponent’s end step is a great way to prepare to combo off.

Prophetic Prism is fairly self explanatory. It draws a card, filters mana, and is a non-creature spell that triggers Jeskai Ascendancy.

Mox Amber is a fantastic card in this ascendancy build.  In previous builds I would be short the ability to untap my Sylvan Awakened lands, having a free non-creature spell that triggers ascendancy is just amazing. It allows you to combo off more regularly on turn 4 and of course the Emry Amber shenanigans.

Expedite is a key piece of the Emry package. Allowing Emry to have another pool of possible non-creature spells to cast the turn it enters is a great boon and the draw off this card is non to be underestimated.

-2 Emry Lurker of the Loch 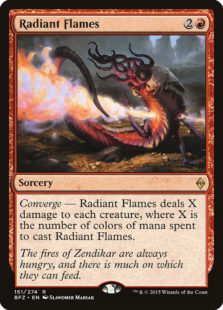 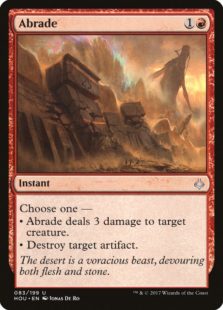 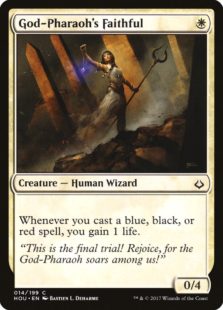 Radiant Flames and Abrade are great removal in this format.  Being able to affect the amount of damage that Radiant Flames deals is a key way of being able to keep your Caryatids on the battlefield. Abrade on the other hand is a flexible removal spell for many threats.

I will admit I was hesitant to try God-Pharaoh’s Faithful at first but have been very happy with the work this card puts in.  First it’s an 0/4 so it blocks a huge amount of relevant attacking creatures in this format. Secondly it gains a reasonable amount of life with your draw spells, removal and almost everything in this deck.

I also have boarded in Saheeli, Sublime Artificer in some aggro matches to provide blockers and an alternate token win con but I haven’t been impressed so far.

-2 Emry, Lurker of the Loch

Currently this is the boogie man of my local meta. Two local comp rel tournaments had at least 1 UG Nexus in the top 8 and others competing for the top spots.

-2 Emry, Lurker of the Loch

The Emry and normal combo package is much worse vs Nexus. Having the ability to essentially do nothing better than them and draw your library to win with Jace is a great way to finish the game out vs. those pesky fogs.

On top of all of these options I have played multiple other versions and have experimented with Teferi, Time Raveler in the sideboard and it has been outstanding but until I have a version of that sideboard that I feel confidant with I’m sticking with this list.