The Art of Magic: Building Your Deck

Welcome to The Art of Magic! Today we're looking at one of the more vital parts of Magic: deck building. We're going to look at how one would approach the build and what one does with those ideas. While we have already gone over how to go about choosing what kind of deck and play style best fits you, it's time to talk about how you would go about giving those ideas a form.

So, you've decided to create the deck of your dreams. Now what?

Well, let's use an idea I had the other day as an example. I decided to build a cohesive mill-based Commander deck on a budget. I'm sure you've seen someone play mill before, but I fell in love with the idea of having multiple win conditions that could take my opponent by surprise. Finding mill cards may be fairly easy, but the key is to create synergy within the deck.

There are sites like Gatherer and EDHRec which can help you find exact keywords and how to formulate good strategy. For my deck, I wasn't just looking for cards that would mill my opponent. I was looking for cards that would win based off the state of my opponent's graveyard. Wight of Precinct Six is a good example of what I was looking for. It's aggressive, but keeps up the appearance of a mill deck on the surface. It gets bigger for each creature card you've milled from your opponent's deck. Guiltfeeder is my personal favourite because it doesn't deal damage, it hands out life loss. Life loss that's determined by how many cards are in the defending player's graveyard, as long as it's not blocked. Thankfully it also comes with a great form of evasion.

Once I've come up with how to bring my deck together, then I come up with my filler. I always find this easier in formats like Modern or Standard. Decks for those formats are more focused on reliably drawing the key parts that make them tick. But regardless of the format, there will always be gaps that need to be filled with cards that get you to a state where you can win the game, help you find the key pieces, or oppress your opponent so that you can win the game. Cards like tutors, counter spells, draw power, or the like. In the case of my mill deck, I wanted to find some kind of tempo and control packages to get into a position where I could either deck my opponent out, or kill them outright with another win condition. 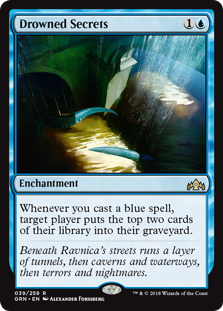 Mill's typical colours achieve this with counters, bounces, and removal. Drowned Secrets is great for this approach since it rewards longer, more drawn out control games by milling your opponent whenever you cast a blue spell. Does it win games? Maybe not. But it does compliment my Commander deck, and it fits into the budget archetype I was after.

Once you've determined the theme of your deck, found your synergistic key components, added the filler, you've basically got a first draft of your deck. Now all that's left is to choose your lands and get it out there. At this point, the only way to keep improving is to see how well it stacks up against your local meta. You're not going to win every game. However, as you play you'll find more efficient and consistent cards and get an idea of what you're up against, and how you can deal with it.

By the time you've gotten through all of this you likely have all of the means to finalize a first draft of your deck and, really, at this point, getting your deck out there and seeing how well it stacks up against others is really the only way to improve it. Continuing your research and finding more efficient and consistent cards is going to happen and understand that you're likely not going to win every game your deck goes up against but it will give you an idea about what you're likely up against and how to deal with it.

That about does it for today. It was fairly short and sweet, but I've found this process helpful when considering how to build a deck. What did you think? Did you have anything to add that you go through when building your deck?