For the last three years or so, Magic has been a pretty strictly competitive endeavour for me.

Even when I'm brewing a deck that I know isn't going to be a chart topper, the mindset during its creation is still focused on winning. What's the early-mid-late game plan? What does it do about the most common decks in the meta? What's the perfect mana base? What's the perfect removal suite?

But it wasn't always like this. Up until Theros or thereabouts, my approach to constructed magic was much different. Which dual lands do I own? Which colours are my favourite? Isn't this four-card graveyard combo neat-o!?

But among those, there was one that was most important: How fun will this be to play with my friends?

For most casual Magic players, Commander is where it's at. And I get why - it fulfils all the self-identifying, deck-perfecting, foil-seeking Magpie-tendencies that we all possess deep down.

But I always preferred 2HG. I'm a 60-card purist, I like having access to multiples of key spells, and above all else, I liked the experience of having an ally to coordinate my shenanagins with.

So for years, this is how it was. I had a Blue-Black control deck that I'd curated since Revised, and although it was built for single-player gaming (and continued to function that way as well), it really came into its own as an A+ support deck when a friend was thrown into the mix.

Defining Features of the Format

I'm not going to get into the actual rules (you can google those quite easily - in a snapshot, you play in teams of two with a combined 30 point life total, and attack and block together), but I do want to discuss some things that I believe to be central to approaching and enjoying the format, because like any other, 2HG has its own set of nuances in rules interactions and strategic planning.

For the former - rules interactions - just like in multiplayer EDH, certain cards function in strangely overpowered ways because they weren't built for the format, but the ways they improve are somewhat different. Take "each opponent"-type effects, for example. They are great in EDH because even though the effect for each player is the same, you get to multiply their efficiency essentially for free. In 2HG, these are arguably more broken, because when "each opponent" loses three life, your opposing team loses six. So while when you trigger Heartless Hidetsugu in EDH, everyone loses a bunch of life, when you do it in 2HG, any team with an even life total straight up dies immediately. This is just one of many examples of janky things you can do to exploit the format. 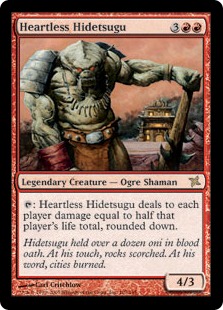 For the latter - strategic planning - there is a lot to consider, but it effectively boils down to ensuring you and your partner's decks work well together, and you embrace the cooperative nature of the format and search for interactions that add up to more than the sum of their parts. Aurelia's Fury might be your go-to control method, but if your teammate is playing a controlling Black strategy, you might want to save it as a late-game finisher. And if you establish a consistent partnership, it is of course worthwhile to tweak your deck with your teammate's needs in mind.

The common reality, though, is that you don't always play with the same partner. Although among my group of four we had a strong preference for "the classic matchup", as we called it, we did all build our decks with the intention of flexibility. We did this for two main reasons: First, we simply enjoyed shifting things around sometimes, and secondly, it helped maintain a healthy meta where extreme strategies like aggro or infect were naturally pushed out, and therefore we weren't constantly revisiting the drawing board to address radical gameplay fluctuations.

But regardless of the constancy of your teaming situation, I would advise that balanced decks are your best bet either way. They are more fun, they encourage creativity, and they make for the best stories. Save the double-infect plan for the (thankfully nonexistent) tournament scene.

Enough of that high-level stuff though, there are definitely a few nuts and bolts tips that can help accelerate you into the format if you've never touched it before:

Finally, the stuff that really matters. I'd rather lose five games straight through hours of laughter than prove that I'm the best game-in, game-out. Here's a couple things that I find help the format:

And of course, I almost never write an article without sharing a deck list, so I dug up my old scribbles. On one hand, I cannot believe I used to play this dumpster fire. On the other, I can't remember the last time I had that much fun.

As for the rest of my group, the Blue-White player had a grinder strategy revolving around Grand Arbiter Augustin IV, Aven Riftwatcher, Reveillark and Sun Titan, the White-Black didn't care if all four of her Serra Ascendants were demonstrably unfair when starting at 30 life, and my Black-Red partner in crime kept her in check with Lightning Bolts to the dome, Void, and big mana plays with Koth of the Hammer and Cabal Coffers. Nonsense all around, and good times were always had by all.

Well, that about does it. I'm sure I could talk a lot more about the format, and frankly my appetite has now been freshly whet to pay a visit to old friends and relive some of my least competitive and most defining moments of my Magic experience.

Thanks for reading, and until next time, may the force be with two.