We've been looking at plenty of control decks, plenty of janky combo's and there was even some tempo in there, this week we're going right to the face and smashing it. 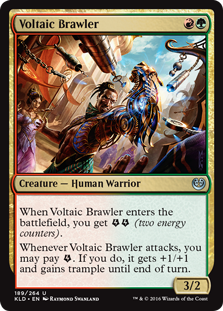 When I first saw this card spoiled during the Kaladesh preview show during the World Championships I knew aggro was coming back. Granted we didn't see much G/R Energy decks this weekend during the Kaladesh Pro-Tour, however I think there's definitely a build out there that we can construct on a budget that can brawl our opponents into submission.

Get ready for the deck that has the most creatures I've ever played before....

The deck is lean, low to the ground, and optimizes energy and the cards that make it.

All told the deck only runs around $60 according TCG Market Price.

Upgrades? Well, the obvious one would be Verdurous Gearhulk. The card is purely broken and you could even still put the it in our deck and not hit our $100 deck budget. I omitted it because the card breaks our $5 a card rule, by about $3.

The deck is full of synergistic effects that make Energy and then it uses creatures to take advantage of that Energy to win the game. The game plan is straight forward, play creatures, make energy, and profit.

That's really all there is to say this week folks!