Usually I sit down to write about cards, or decks, or other fun parts of Magic. However every once in a while I experience something that I can only describe as being “wrong” and it sets me off. So, today I’m going to take that rant and run with it. This past weekend my brother and his roommate went off to the Local Game Shop to play in a Sunday afternoon draft. Their experience can only be described as being “suboptimal” and not because they made mistakes, but because other players very seriously overstepped the bounds of what is acceptable conduct. Let me explain.

My brother sent me a message saying that the player he was facing in round 1 of the draft had spent most of the actual drafting process gloating about how he and his friend were going to meet in the finals because everyone else at the draft table were “noobs”. My brother bit his tongue, and sat down and played the guy. Throughout the entire match the same sorts of comments continued to come out my brother’s opponent to the point where my brother was very annoyed. In the end my brother, the “noob”, mopped the floor with this other guy and sent him off to pout.

Now, the first point here is that you can never underestimate your opponent, regardless of format, and to assume that you will be in the finals because you are facing less experienced players is a grave error. You simply can’t assume to be familiar with the playing background of the players around you just because you don’t recognize them as local regulars. In the case of my brother, who is a doctor and spends extensive amounts of time at local area hospitals, he doesn’t get an opportunity to play at the store very often, but he’s hardly inexperienced. He plays plenty of Magic online, drafts with me and my friends regularly enough, and has been playing Magic on and off again since he was 12 years old. He’s no “noob” and to assume that he is a “noob” is asking for a humbling experience. That lesson extends from your local FNM to the highest level events. Magic is a terrific game and with any series of games almost anyone can win. Yes, experience helps, but you can’t assume you will win. You need to still play the games and play to the best of your abilities or else you will end up getting beaten more often than not.

Play To Win but Don't Be A Loser

Next, while you may be the more experienced player and you may have the superior deck, it still doesn’t give you a license to gloat about how you win almost every match. Let’s remind people why we play Magic. Yes, it’s fun to win, but at its core people enjoy the experience of PLAYING regardless of whether they win or lose. We, as a community of Magic players, should be looking to make that experience as positive as possible for everyone. This doesn’t mean you need to try and prop up the guy who finishes last at your FNM, or drafts junk at side events of a PTQ just so he doesn’t feel bad. However, what it does mean is that you at least need to be courteous to the other players at the event and allow them to have as much fun as they can. In my career as a teacher, we repeatedly talk to the students about treating others the way they would like to be treated, and this same lesson applies here. In the my brother’s experience this other player could only be described as a jerk and in my personal opinion got what he deserved when he got wiped all over the table. However, any player shouldn’t have to put up with a guy boasting like that and spoiling the fun of others.

Thirdly, what IF you are playing an inexperienced player? My brother could handle himself just fine, but I’ve been to enough drafts where there are players that are drafting for the first time. They make poor card selections, play things incorrectly, and generally aren’t real sure of what to do and when. I feel like it is the job of more experienced players to try and help these newer players learn how to improve their skills. All it takes is a moment to stop play and explain what a card does, or suggest that they target the real problem on the board because they may have misidentified or misunderstood what is happening. However, when players boast and gloat about their relative abilities and prospects of winning, I find it difficult to believe that in the next breath they will be willing to sit down and help a newer player to learn. We want to encourage more people to enjoy the game, and that means having them come out to play at different events, but by acting in a way that intimidates or spoils their experience then we end up further discouraging players and turning players off of our great game.That really isn’t optimal for the long term health of Magic.

Now, by no means am I trying to paint all Magic players with the same brush. My experiences have been exactly the opposite of what my brother witnessed and for that I am thankful. Many of the players I have played with when I venture to the Local Game Shop have been very friendly and willing to answer questions, give a quiet tip here or there, and just generally be sociable. I can think of numerous examples of very helpful opponents who have gone out of their way to help me and I can only try to repay the favor. Some players aren’t overly sociable and willing to talk about cards, or lines of play, or really anything, but at least they are usually courteous. We play our game, somebody wins and somebody loses, and we both move on with life. I can live with that and really expect nothing more from my opponent.

If you can live up to that simple expectation then you too play the game with what I can simply term “class”, and really that is all I can ask. Some players play with more class than others, and that’s fine. The issue becomes when players have forgotten that their opponent has taken time out of their busy life to try and play a little Magic and have some fun, and they opt instead to be play the game without any class and act like a jerk.

What can we really do about it? Well, nothing. I can’t give anyone the moral high ground to walk around their favorite game shops and be the “class” police. However, what we can do is to sit back, be somewhat reflective, and think about how we treat other players when we head out to the shop to play. I’m not saying to quash genuine emotion, or to make the game cold and calculating, but I am asking players to come to the table and play in such a way as to treat your opponents with the respect they are due. It seems like such common sense and easy to do, but a wiser man than I once said “common sense isn’t all that common”. How true, indeed. 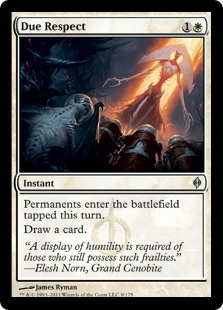 So, when you head out to your Local Game Shop for FNM, a pre-release, or casually with your friends in a basement, remember you never know who you’re playing against, so consider how you would like to be treated and then play your game of Magic with all the class you can muster. Your opponent deserves at least that much.

Ok...rant over.
Thanks very much, and until next time keep it fun, keep it safe...keep it casual.