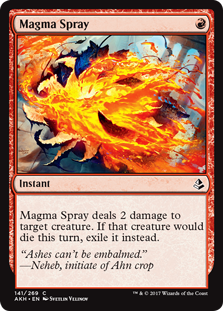 Shock has always been good (or at least ok) in limited, and I think in this format it will be better than average. It’s a fact that fast aggro decks are very real here, and if you don’t have a way to interact with them early you will lose to them. This is basically the best answer to cheap fast threats; it itself is cheap, it’s instant speed, and it just straight-up kills a lot of important threats. It isn’t useless against big creatures either; you can easily set up to trade this plus a 3 power guy for your opponent’s Nessian Asp if you need to. The fact that this doesn’t hit players is a tangible downside, but isn’t that big of a deal, because in limited you would be using this on a creature probably 95% of the time anyway. The exile clause isn’t too relevant, but it is a slight upside because it makes it so things like Pharika’s Mender can’t get it back, and it won’t help with things like Nemesis of Mortals. 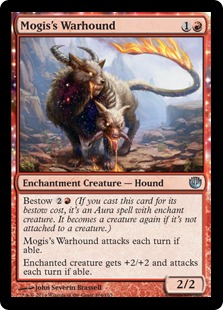 Speaking of aggressive decks, this guy seems like a total beating in something like RW Heroic. The really great aspect of this card is the cost; it’s extremely cheap for a bestow creature of its size. That’s made possible by its downside of having to attack each turn, but I don’t think that is that bad at all. In the deck that really wants this, you don’t need the card to tell you; you know that you’re attacking no matter what. If you play this on your two drop on turn three, you’ll pretty much always have a good attack, because basically nothing they could have done so far is going to be an effective answer to this. Warhound is also quite potent with pretty much any flying creature, so I think a red-blue deck (which, given, seemed notoriously weak in the format before Journey) might want this as well, even if the deck isn’t necessarily super fast. 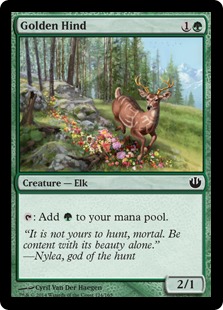 Anyone who has played this format extensively knows the power of Voyaging Satyr. In an environment with so many late-game mana-sinks like creatures with monstrosity, and expensive bestow creatures, using an early turn to accelerate your mana is extremely valuable. The downside to Voyaging Satyr was that the body it left was a measly 1/2; not very useful most of the time. With Golden Hind that problem is remedied; a 2/1 is much more useful. It can trade for some aggressive creatures like Akroan Hoplite, or go on the offensive itself if you need it to. Basically any green deck will play this and be happy, because green’s strategy in general is to play big threats that overpower the opponent’s, and the Hind simply lets you put those fatties on the table faster. 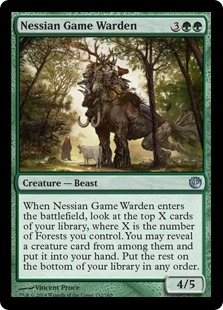 I’m not completely sure about this pick, but this guy just seems really solid to me. A 4/5 for 5 isn’t amazing but it is definitely acceptable and I would happily play that if I need a 5 drop. But this guy has a sweet upside that lets you get an easy 2-for-1 by grabbing another creature. The odds of hitting are pretty high if you have a decent creature count in your deck and have around 3 forests out (for example the odds of hitting a creature off 3 forests in a 17 creature deck are roughly 80%). And even if you miss, that probably means you didn’t really want to draw those cards anyway. Later in the game when you have a lot of forests out this gets really good, because you probably will get to pick between a few different creatures and choose the one that is best right now. Of course this gets a bit better the heavier green you are, but I would guess that any deck playing 8 or more forests can probably play this to good enough effect. 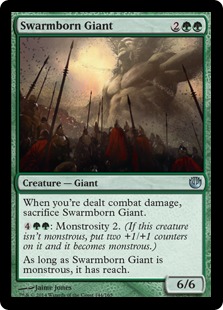 This is another card that is really hard to evaluate without playing with first, because I’ve never seen anything like it. I think there’s a chance this is just awesome because of its insane size for its cost. Also because of the fact that when you cast this they probably won’t have very good attacks at all anymore, so it mitigates its own downside. However, I also know there will be times when they just have a flyer and you can’t cast it at all. It’s definitely one to keep your eye on though, and one that I’m excited to try out. 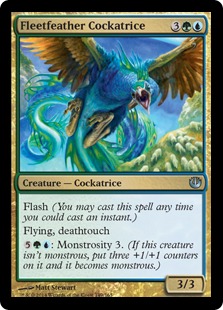 This guy has a ton of abilities and seems really pushed in power level. It does a lot of different things, the first being a 3/3 flyer for 5 which is acceptable if unexciting. But it has flash, which means this can act as a removal spell! It has 3 toughness, so it can block and survive against a lot of the smaller creatures, granting you a straight-up 2-for-1. It also has deathtouch, which means it can block any giant monster your opponent might have, making it effectively a Divine Verdict if you need it to be, which is totally fine. You can also just safely leave up mana for counterspells or other instants and then cast this on your opponent’s end step if you didn’t have to use them. And if all that wasn’t enough, if you get to 7 mana this turns into a giant 6/6 flier that will surely end the game quite quickly, as huge dragons are known to do. Of course this comes with the caveat that you can actually cast this, which means you’re in UG, but any deck that can cast this will certainly want to. 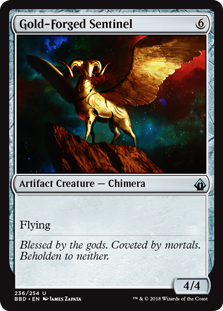 Not a ton to say about this guy, just that he is a fine playable 6-drop if you need one. It’s not that much worse than Horizon Scholar, which is a solid finisher. If you can pick this up late in the pack, go for it, and then if you find yourself in need of more end-game spells you can put this in. No real need to pick this early though. It is probably a bit better in decks that don’t otherwise have a lot of fliers, like maybe a red-green deck.

Thanks for reading my top common and uncommon picks for Journey into Nyx. I’m sure some of these evaluations will change as we learn more about the new format, but that’s all part of the fun of it! Happy drafting.