An Eye for Ugin

It’s everybody’s favourite time of year, spoiler season. Khans of Tarkir was an amazing set, and I think everyone is paying particularly close attention to Fate Reforged spoilers because of this. Wizards decided to kick things off this season with a HUGE new planeswalker that we have had yet to see in card form: Ugin, the Spirit Dragon. 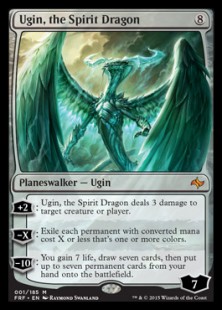 Good lord that’s big. This card is no joke people. With such a high mana cost comes high expectations, and Ugin delivers with a massive effect on the board. And since its mana cost is entirely colourless, Ugin is immediately being compared to Karn Liberated. Now as a Tron player in modern, it’s not often that a new card gets printed that I end up seriously considering for a slot, but Ugin fits the bill. Colourless? Check. Extremely powerful? Check. Can I play it on turn 3? No. Ok fine, I’ll settle for turn 4, we can’t have everything. I don’t believe that Ugin slides into the deck as a 4-of, but I can definitely see playing 2 copies.

Ugin’s +2 Ghostfire ability is an acceptable one, removing a creature from the board or simply bolting your opponent. Bringing Ugin up to 9 loyalty is no small feat for your opponent to overcome either, especially since our game plan ideally aims to play Ugin out on turn 4.

Now this is the ability that truly makes Ugin powerful. Essentially it is All Is Dust, except for a few minor differences. Exiling each permanent is quite relevant, and the fact that the ability does not exile colourless permanents means we do not lose anything by using it, unlike when we would use an Oblivion Stone. However, not hitting colourless permanents is also a downfall, making the ability practically useless against Affinity decks. I can see Ugin being used mainly for this ability in Tron, gaining us an extra Oblivion Stone effect.

"You gain 7 life, draw 7 cards, then put up to 7 permanent cards from your hand on to the battlefield"

While Ugin’s ultimate is not as game ending as Karn Liberated’s, the amount of value and advantage a Tron player would gain from it will be almost unbeatable, unless you end up on the poor end of variance of course. Drawing 7 cards with Tron is powerful enough, but then putting up to 7 permanents into play can be devastating for an opponent, especially with the card power we have access to. Another thing to note is that after using Ugin’s first +2 ability twice, using the ultimate leaves you with 1 loyalty, so you will still have access to Ugin again on your next turn.

Overall, Ugin, the Spirit Dragon is a very powerful new option for Tron players to take advantage of. Although it is not on the same level as Karn Liberated, it can act as a nearly as devastating follow up threat that many opponents will not be able to overcome. Here’s the new list I plan on sleeving up come the release of Fate Reforged:

Tron's place in the Modern metagame as of late has decreased drastically as of late, due to the influx of new and powerful archetypes using Treasure Cruise and Dig Through Time. I don’t know if Ugin, the Spirit Dragon is the new piece Tron needs to re-establish itself in the meta, but I am definitely excited to test it out. New cards powerful enough to earn a place in Tron are definitely few and far between because of the nature of the deck and how narrow the requirements can be. I’m happy to see a new and obviously powerful option for the deck and can’t wait to see how it plays out.

Until next time, happy new year and happy spoiler season!