For those that don't know me, I strongly identify with the Mardu Horde. Red, White and Black are the colours I like to play and I generally steer clear of Green and Blue. This is just my personal preference. Some of the guys I brew with say that it holds me back, but I think there are plenty of great players that basically play the same thing every time. I'm at the point where playing a deck I enjoy is important to me, so even if I have to play a tier two or three deck I will if it's something I enjoy more than the premier decks in a given format. There is also something to be said for playing what you know, which is of non-zero value.

Case and point, I've been playing various iterations of the following deck since the beginning of this standard season:

This standard season has been my most successful since Shards of Alara / Zendikar standard when I was melting Jund decks with Rakdos Deck Wins. The list above won a lot. It was a struggle figuring out how to squeeze in Chained to the Rocks and tune the manabase at the beginning of the season, but sticking with it paid off. It became a tier one deck. More importantly, I enjoyed playing it. Never the less, it is time to stop looking backward and look to the future.

The new Mardu / Rakdos mechanic, Dash, has me very excited, mainly because it reminds me a lot of these cards: 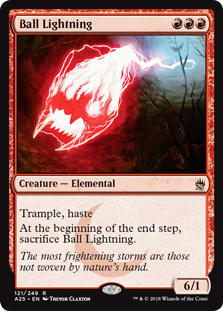 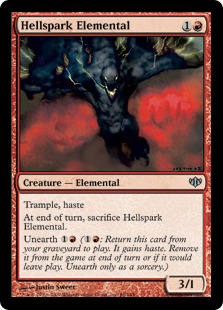 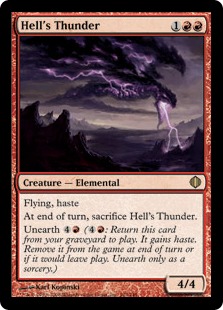 Dash is worded: You may cast this spell for its dash cost. If you do, it gains haste, and it's returned from the battlefield to its owner's hand at the beginning of the next end step.

While this isn't the same as unearth, it is potentially better (because it can be done more than once) and potentially worse (because it can be countered). I think the main benefit of Dash is that it dodges sweepers like Anger of the Gods, Drown in Sorrow and End Hostilities. Oh, and let's not forget this new gem:

It also grants haste, which is potentially huge, especially after one of the aforementioned sweepers or drive that final nail in the coffin while your opponent is tapped out.

Let's take a look at the six cards with Dash that have been spoiled so far:

Flamerush Rider seems pretty decent, but a little bit overcosted. It's value will vary based on your board state. I think that the Dash ability it relevant here as a way to apply pressure while not playing into an End Hostilities. I could see this seeing fringe constructed play, but I'm leaning towards draft fodder.

Goblin Healcutter seems reasonable. It reminds me a lot of Firefist Striker, but the manacost does hurt it a little. I see this being a solid mid-pack draft pick, but it probably won't see constructed play.

Ah, the card I was hoping for when I saw the mechanic spoiled. This guy has a lot of potential, and is the most Hellspark Elemental-esque we're likely to get. A shame he doesn't have trample, but I'm still interested in brewing with him as a quasi-repeatable Lightning Strike whenever your opponents don't have a blocker up / mana untapped. The ability to run this guy into a rhino and then Searing Blood the Rhino after damage seems reasonable too. Brew featuring this guy to follow.

(As an aside, I think Searing Blood is going to be crazy good after Monastery Mentor and Soulfire Grandmaster become all the rage. Just sayin'.)

Another playable 1 drop warrior for Orzhov Warriors.dec? Ok. This upgraded Pulse Tracker seems completely playable and the Dash ability can help you to play around Anger of the Gods / Drown in Sorrow. I think this will be a staple in the Orzhov Warriors builds. Brew below.

This guy is interesting, and I think he could play a similar role in Orzhov Warriors. I think the Dash ability at 4cc is exactly what you need to keep pressure up after a 3cc sweeper. Orzhov Warriors could be a threat this season.

The Rakdos dragon of the set. This card seems very good and I assume it will see Standard play. It could be the card that pushes Mardu Tokens over the edge. The curve of Raise the Alarm into Hordeling Outburst into Sorin, Solemn Visitor into Kolagan just seems insane. Decklist below.

Okay! Let's look at some spicy new brews. First up is Orzhov Warriors.

It might be correct to play Obelisk of Urd here, but without Hordeling Outburst and Goblin Rabblemaster, I feel like it loses a lot. Hall of Triumph will always name black, and this deck also gets to play Valorous Stance, which seems very, very good. Chief of the Edge helps the team to hack there way through Hexproof Plants and apply a lot of pressure. I could see this being a really decent linear aggro deck in standard with a few tweaks. Time will tell.

Brew number two is R/W Burn, an archetype that is close to my heart:

While I don't think Monestary Mentor is the second coming of Young Pyromancer, I agree with others that it will probably be good in standard. However, the main reason I feel it is playable is the spoiling of Wild Slash. I think it's really important to have a 1cc Shock type spell for when Mentor inevitably eats removal, in order to get value. Hushwing Gryff does it's best Skullcrack impression, and Mardu Scout is a Lightning Strike anytime your opponent's shields are down. Soulfire Grandmaster gives you the ability to out attrition other aggressive strategies and makes your Stokes etc. act as Warleader's Helix. This deck's performance will greatly depend on how the meta shapes up, but I could see it being a player, and I could see myself playing it. I think this is the shakiest of the three decklists though.

If this strategy seems familiar, it's because it is. The shell is the same as the current Mardu Midrange decks, but it is warped toward tokens. Raise the Alarm replaces Seeker of the Way because it provides another body. Butcher of the Horde has plenty of food due to the sheer number of bodies the deck is able to generate. Kolaghan and Sorin both give relevant anthem effects and Kolaghan plays nicely around End Hostilities and Crux of Fate. I could really see this being the next iteration of Mardu Midrange.

That's all for this article. In summary, I think the Dash mechanic has a lot of potential and I look forward to testing it. It should give the aggro decks a little more teeth against control and a little more flexibility elsewhere. I'd be totally stoked to open a Kolaghan or two at the prerelease next weekend. If you do attend a prerelease have fun, and hope you open well!