This week? Well... this week I'm bringing to you a deck I've been pretty high on lately. It's a modern deck, and it's well... a janky combo. 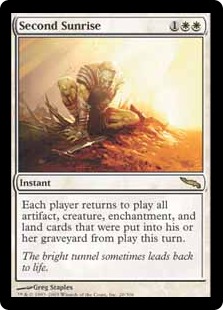 Whaaaaaat?! Isn't that card banned?! Is what you're probably asking at the moment.

A History of Eggs

Eggs as a deck was first seen at Worlds in 2006. It was a big shock to everyone, and surprisingly the deck played fairly well.

As you see, the deck gets the name from the various Egg artifacts it plays: Darkwater Egg, Mossfire Egg, Skycloud Egg, Sungrass Egg. Thanks to these cards an “egg” in Magic has come to be known as a card that basically cycles itself, makes mana and draws you another card.

You see eggs in various Tron builds ala Chromatic Sphere and Chromatic Star where they use their eggs both to filter mana and dig in their deck either for their Tron lands or some action like Ugin, The Spirit Dragon .

The goal of the deck, is simple. Cast a bunch of artifacts, cycle through them, sacrifice your Ghost Quarters and Archaeological Digs in order to make as much mana as possible with Lotus Bloom, that you put on the field without having to wait via Reshape, and then bring everything back with Second Sunrise. You do this about a dozen times and end up creating an infinite loop with Pyrite Spellbomb since you get Second Sunrise back with Conjurer's Bauble.

You win by drawing your deck and killing your opponent...

Needless to say, the deck can take awhile to win, but you can't really scoop to it because it is kind of a fragile combo.

When the actual eggs rotated out of Extended the deck wasn't really playable, despite brewers always trying to make it work. Then, Faith's Reward was printed in M13, and the deck became playable again.

Not only did it become playable, but thanks to MTG Pro Stanislav Cifka, it became a Modern Pro-Tour Winning deck at Pro Tour Return to Ravnica.

As you can see, the deck doesn't play anywhere near the amount of “Eggs” that the original deck played, it was compensated however by the fact that we had another effect that brought all of your things back to the field. With eight Sunrise effects we could play less eggs and keep the cycle moving.

By the end of 2012 however, Eggs was in a poor position due to the powerful more popular “Storm” deck that surged, and Eggs having the same hate cards as Storm, made Eggs almost unplayable.

Then Bloodbraid Elf and Seething Song were banned and Storm died off. Eggs was able to live once more! Not only did it live, it won GP San Diego in the hands of Nathan Holiday.

Then in May 2013 Second Sunrise was banned. It wasn't really banned due to the deck's power level though, while it was a dangerous combo deck, it could be easily hated out. It wasn't even banned because it took up too much of the Modern metagame. The problem with the deck? It led to some of the longest turns ever. Seriously, if you've ever sat across from someone playing Counterbalance and Sensei's Divining Top you still don't have an inkling of the kind of snooze fest you're in for. You could easily take a 20 minute turn while you combo off and win the game, and no one wants to sit through that, or watch it. So, Wizards, ultimately decided that Second Sunrise needed to go.

Ever since the banning, people try to make the combo work through other means. Thankfully, we still had Faith's Reward and Open the Vaults was also printed, which was just a much more expensive Second Sunrise.

The deck is now sometimes known as Ironworks Combo since it now has the addition of Krark-Clan Ironworks in order to produce obscene amounts of mana and loop all of our spells together, just like the good old days.

In non-budget builds we also see the addition of Mox Opal in order to help boost our mana, and there's claims of it being able to combo on Turn 3 with the nuts.

I'm one of the faithful, thinking there is still some version of the deck out there that can be a winning deck, and at least take down a FNM.

In order for you to play any version of this deck and do anything but spin your tires however, you do need to play Lotus Bloom. I've tried without, and the deck just can't do anything without the modern Black Lotus.

I'm sorry. I really am, but I've been pretty high on this deck for awhile, and finally got the last couple of pieces I needed to finish it up.

In Modern Day Eggs decks, you have people playing all sorts of different ways to win the game. Bitter Ordeal with Gravestorm since you cycle your things so many times, milling them with Grinding Station, burning them in the face with Banefire, or pushing enough mana to hard cast the old spaghetti monster itself Emrakul, The Aeons Torn.

In my version, we're sticking with the classics. We're going to burn you out 2 points at a time with Pyrite Spellbomb. Thanks to Codex Shredder once you have 9 mana, one of which is white you're able to loop “infinitely” bringing a Faith's Reward back to your hand, thus putting Codex Shredder and Pyrite Spellbomb back on the field so you can fire again.

Some of the big strong points to remember when you're playing the deck, is that while when you're “going off” colourless mana is not really going to be an issue, but coloured mana will be. You'll usually always be able to make whatever colour you need (favour white and red so you can win), but in small doses thanks to the mana filtering abilities of various cards in our deck.

Like usual, I haven't included a sideboard in our Budget Brew, but if I was going to throw something out there for it I'd start with something like this.... 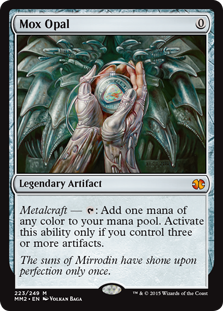 This is the only real upgrade I can think of, and I'd instantly slot 3 or 4 of them into the deck, probably taking out one of the Lotus Bloom's, the Thoughtcast's, and maybe the Prophetic Prism.

So, if you're into extremely janky combo's where you need to pieces together 5+ cards to “maybe go off” and win the game, all while torturing your opponent who's sitting there ready to put a pencil in ear in boredom... this is the deck for you.

Thanks for joining while I try untap the Multiverse and keep things light on your wallet!

I'd love to get some input from the people that read my brews, whether it's an established deck you want me to try and budgetized, or if you have a sweet build around card and need some idea's I'd love to hear from you!