Thanks guys for coming back after me drolling on and on about Ad Nauseam Unlife combo, we're back this week with a spicy Modern brew where you only have to count to 10 before you win the game.

Mono-Black infect plays just like you think a Mono-Black would, plenty of discard hard removal and some sweet creatures that will end the game in a snap.

The benefit of this deck is that with all the removal and the bit of draw it has it can go to the mid to late game, unlike the more popular U/G cousin.

The biggest benefit to playing Black in your infect deck? 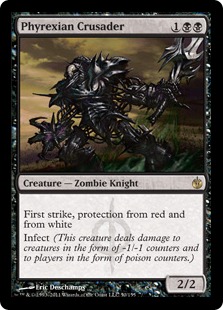 This guy has protection from two of the most popular removal colours. Lightning Bolt and Path to Exile can't touch it, so what is your local Nahiri, the Harbinger player going to do when you're blasting their face? Cry. They're going to cry, and you're going to count to ten and win the game before they drop their end game. 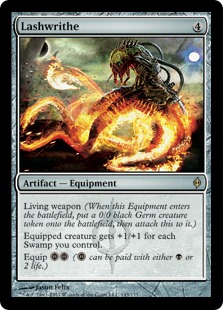 Here's a guy who I've seen before at my LGS and always kind of doubted it in even a semi-competitive deck. I've changed my thought process quite a bit. Actually playing against it can get pretty rough, and in an infect shell? It can be downright nasty. The only real drawback is that it's a four-drop. I've included three in the list because it feels like a card you want to jam right on turn four and equip to your infector of choice, but two might be the correct play as well.

Smash to Smithereens got you down on the card? No worries, with a total of eight mainboard discard spells, and 12 after board all we're going to lose our living weapon to is a top deck, and the opponent living off their top deck versus an infect deck is a very scary place to be.

If we wanted to make the deck better Thoughtseize and Inquisition of Kozilek would be the 8 mainboard discard spells, rather than the suite of budget classics (not that they don't get the job done).

I could also see splashing green for everyone's favourite Infector Glistener Elf, and with all the pump spells the deck would play a bit more like it's G/U cousin. I'd try sleeving it up if you have some Overgrown Tombs you're itching to use.

All told the deck runs about $100 CAN if you buy it from WizardTower.com and 22tix if you're looking to ruin people's day on MTGO.