This week, we're just looking to have some fun. I don't know if it's true or not, but I feel like it's been awhile since we've done a good troll deck. What's the best format to build troll decks for? Modern of course! The card pool is expansive, there's cheap options and anything can be a contender depending on your LGS. 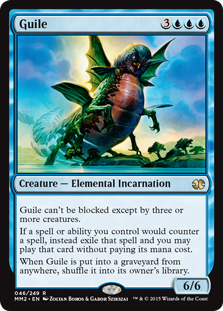 Look at this card! It's a big beefy body. He can be a recurring threat, he has evasion, and if you look at the second block of text

If a spell of ability you control would counter a  spell, instead remove that spell from the game and you may play that card without paying its mana cost

So, how do we best utilize this sort of ability?

Well, we counter all the things of course.

Mono-U Guile is a deck that's actually been around for awhile, and you can see results pop up here and there with different builds of it.

I've played around with builds of it myself and taken it to FNM at a shop where, thankfully, they don't really watch the match timer (or even set one) because with this deck.... we're going for the long game. No ifs, ands, or buts about it we're in it for the long haul. Though, it does get annoying having everyone else in the tournament stare at you as you work your butt off trying to close a game versus a Boros aggro player who just wont concede even though you definitely have them locked out of the game.

Alright, without further ado let's actually take a look at the deck list I've been running....

With cards like Gigadrowse, Engulf the Shore , and Exhaustion you can actually have some pretty good games against aggro decks since those cards can either act like a Time Walk, you just by tapping down their team for a turn to give you the turn you need.

All told the deck runs around $130CAN if you buy it from WizardTower.com or it's around 52 TIX if you're looking to troll some people online and just tell them, “No” the entire game.

How do we make the deck better? Well, Cryptic Command as a four-of. Gigadrowse and Exhaustion try to do the best impression of the blue command, but the power of the two-for-one in Cryptic Command won't ever quite be match and we need to devote a few extra slots to make up for it.

Another card I'd love to play in the deck is Vedalken Shackles. We play so many Islands stealing a beefy Tarmogoyf shouldn't really be a problem and add to our very slow clock.

Other than that, our deck plays the greatest hits of counter magic in the Modern format and is looking to say, “No” by any means necessary.

Archaeomancer is a card I like to use in these sorts of builds, because it really is a pretty good card. It isn't great (ex: Snapcaster Mage), but it does return a spell to your hand when it lands which I've found very helpful, and you don't want to run four of this because it's a four-drop. Late game returning a counter spell or bounce effect is pretty handy though, and I stand by this Wal-Mart version of Venser, Shaper Savant.