Because I am hard headed, I had a brutal weekend playing Standard at Grand Prix GP Providence. Since then we've done a few Kaladesh Standard brews back to back recently, this week we're going back to the format I feel right at home in: Modern.

We're going to look at an archetype that's never really quite found a home in Modern. It was a mainstay in Lorwyn Standard and Extended, but in Modern it just hasn't ever been good enough. You see it pop up in a top 8 every now and then, but for the most part it goes under the radar. 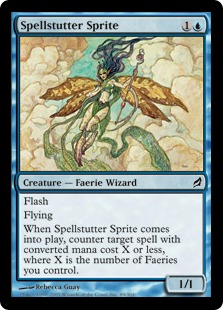 The Morningtide / Lorwyn Standard was home to synergy based tribal decks galore, but Faeries always seemed to be head and shoulders above the rest of them. It played as an Aggro / Control deck (much like Delver decks do now) that won by amassing a small armies of Faerie Rogue's, thanks to BitterBlossom backed up by powerful spells like Cryptic Command and Thoughtseize.

This archetype warped the format so badly that when Modern was introduced as a format (2011), Bitterblossom was already on the banned list in hopes that it wouldn't do the same. Bitterblossom was unbanned in February 2014 along with the aggro kitty Wild Nacatl, and Faeries was.... no where to be seen. As mentioned previously, you see it pop up now and again, but it never really wins anything.

Still though, you have lovers of the tribe that play it and swear it's a solid Tier 2 choice for the modern format. I, dear budget readers, am one of those. It's no secret I love control strategies, or that Delver of Secrets is mostly likely my favourite one drop creature.

Spellstutter Sprite however, is not only my favourite 2 drop creature, but it very well might be my favourite creature ever. It has a body, evasion, and most importantly... a text box that includes countering a spell. I just finished rebuilding U/B Faeries in Modern (RK Post Faerie Rogue tokens included) so I wanted to bring the fun to those of you that are looking for budget options.

The deck comes in right around $80 at TCG Player.com Market Price, and it's no short of fun to play. Landing an army of cheap fairies with Spellstutter Sprite backup, and Quickling for some protection, along with the 12 permission spells we play, it's going to be tricky for our opponent to let anything resolve, and if there is something that lands we have things like Vapor Snag, Boomerang and Unsummon to bounce the menacing opponent's army so ours can get in there and end the game.

For Non-Budget Faerie Funsies you have two “proven” ways to go....

First there is U/B Faeries, which is the more established and played deck. It utilizes Bitterblossom and Thoughtseize, just like the Standard deck of old, by disrupting your opponent on all fronts while you poke them to death with an army of 1/1 fliers. It's also considered by some, crazy expensive for minimal returns. It can play Aggro, Control, or Tempo all depending on your draw and you, as the deck pilot, need to be able to read the deck and listen to the direction it's taking you.

The second popular way to go is U/R Faeries. This version is more of a U/R Counter-Burn deck, playing a flash game with the Faeries or using your mana for permission or to burn your opponent to the ground. SCG Grinder Jeff Hoogland says that Bitterblossom is a terrible magic card, and was long seen championing Spellstutter Sprite in this version.

My favourite part of this deck? Telling Time. I love that Magic Card, and I may just do a piece on it in the near future.

I'll be testing and brewing our Budget Mono-U Faeries this week and posting videos on YouTube, so be sure to be on the lookout!