When Battle for Zendikar was announced I was mainly excited for a reprint of fetchlands for Modern, and to a lesser extent the hope of Modern playable goblin, vampire, and ally cards. With both sets of the block behind us, I clearly didn’t get much of what I had hoped for. For Shadows over Innistrad I am mostly just hoping that the Lovecraft-inspired theme plays out well in the cards, as I am a big fan of his work (early spoilers and mechanics look quite promising). That being said there are a few other things I hope (read: doubt) Wizards does with this set: 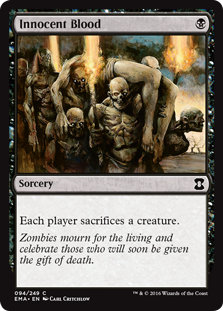 A card Modern control players have long wished for, and one that could help various fringe decks without upsetting the format completely. Black could really use a one mana removal spell that doesn’t cost four life (Dismember) or come up one point too short way too often (Disfigure). Innocent Blood is a timely non-Liliana of the Veil answer to Slippery Bogle and pals, and a clean answer to other aggressive one drops like Wild Nacatl and Glistener Elf. It requires skill and timing to play effectively, and would just all around be an interesting but not broken addition to the format. It should be in Shadows Over Innistrad because the card feels on theme for Innistrad - where horrors are lurking everywhere terrorizing various townsfolk - or hey, maybe just look at it as the other side of Village Cannibals?

A Glimpse the Unthinkable Reprint 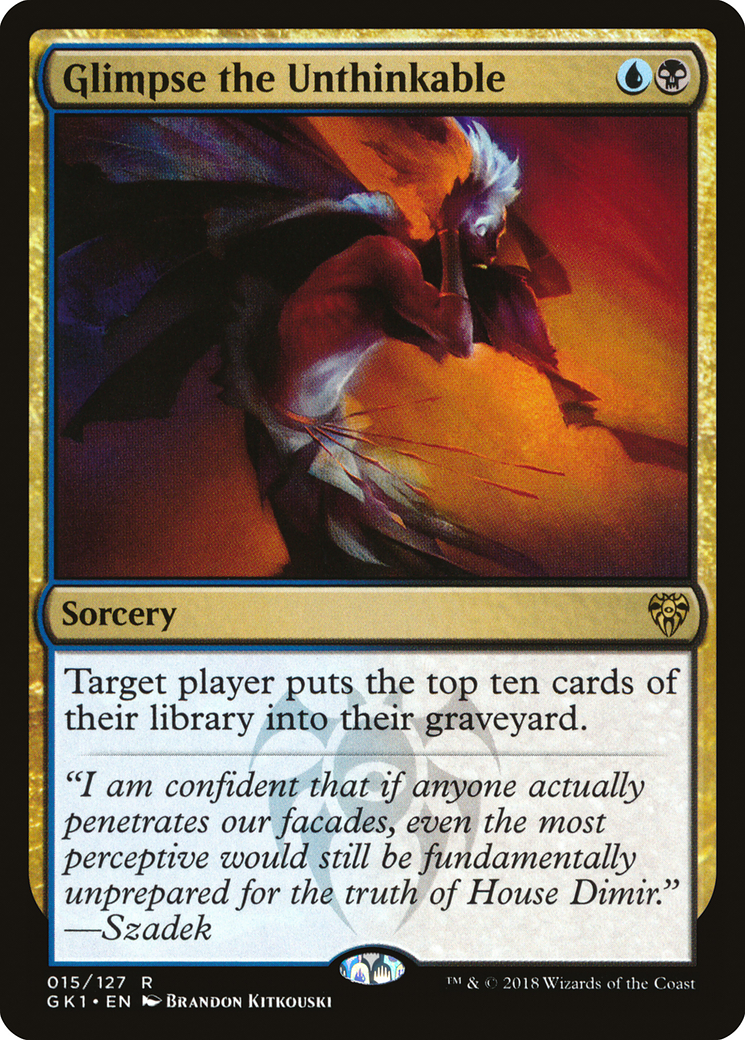 This card is pretty iconic as the best straight up mill card in the game (sometimes Archive Trap does nothing) - it's loved by casual players and a requirement to build a Tier 3 mill deck in Modern. The price however is increasingly out of whack with how good the card is for any sort of competitive play. Glimpse is overdue for a reprint somewhere, but it belongs in Shadows Over Innistrad because the name of the card absolutely screams H.P. Lovecraft. In Lovecraft’s stories humans are often driven insane by being exposed to the unimaginable depths of space and time or unthinkable monstrosities. The card also ties mechanically well with Delirium (bonus effects if you have four or more card types in your graveyard) and thematically well as glimpsing these eldritch monstrosities leads to a state of delirium.

A Cavern of Souls Reprint

Step one, put Cavern of Souls back into Standard, step two, put Counterspell in Standard (and forever into Modern)! That would be the dream - although I honestly have no idea if Counterspell would be overpowered for standard nor if Cavern of Souls would mitigate it if it was. More simply this is just an increasingly expensive original Innistrad block card that can easily re-appear in Standard (unlike say Liliana of the Veil or Snapcaster Mage). It would be nice if Wizards coughed up one of their bulk rare slots for something like this.

The Delirium mechanic refers to number of card types in a graveyard, a mechanic previously the sole property of modern’s most expensive card (Tarmogoyf). If Wizards wanted to blow everyone’s mind they’d just reprint Tarmogoyf as an Shadows Over Innistrad rare, but let’s aim lower. There will almost certainly be some kind of cheap green creature that gets a power and toughness boost when you achieve Delirium, the question will be how pushed it is. I can easily imagine a 1G 2/3 that gets +2+2 with Delirium, making it a 4/5, i.e. the size of the average Tarmogoyf. If that’s as pushed as it gets the card won’t replace Scavenging Ooze as the current budget Tarmogoyf replacement in Modern, and I’m not sure exactly what it would take. I leave the specifics up to Wizards R&D, but a lot of modern players would love to see a budget Tarmogoyf option - and Delirium seems like the mechanic that could enable some kind of good but watered-down Tarmogoyf for the Modern player on a budget.

Something for Modern Vampires

I mentioned that Battle For Zendikar did not do much of what I wanted, but only vampires was a complete void out of the block. The closest thing vampires got to a Modern playable card was Drana, Liberator of Malakir, which does nothing that current vampire decks need while also failing the bolt test. If the plane that brought us Bloodghast and Gatekeeper of Malakir whiffed completely on its second coming, maybe the one that gave us Olivia Voldaren can fill in the gap. Something as simple as a Sign in Blood where the life loss only happens if you do not control a vampire perhaps?

With the dearth of high profile reprints since Thoughtseize in Theros, and Goblin Piledriver and Chord of Calling in Magic 2015, I am skeptical any of these things will come to pass. Battle for Zendikar did have Felidar Sovereign, so Wizards appears to still be doing relevant reprints - just not necessarily with an eye to meeting demand (as indicated by price) of Modern players. Until next time, here's guessing that Cthulu is Emrakul, the Aeons Torn!