Hi all, thanks for reading my first (and hopefully not last) article with MTGCanada! I admit, I'm not a Canadian. Originally I hail from quite far from the Great White North, I now live on the border and meet with Canadians on a daily basis. As far as Magic goes, I was thrilled when Pascal Maynard made a Top 8 in a Pro-Tour and fully supported the decision to money draft the foil Tarmogoyf back in Grand Prix Vegas, I've also been a long time fan of Jeskai Control extraordinaire Shaun McCLaren.

Anyway, I think I've lost track of things. We're here to talk Magic. Standard Magic, in fact. It's not my favorite format, but I'm not the kind of person to turn down a game of Magic, and Lord knows I like to brew whenever possible. Stormchaser Mage is a great Magic card that can certainly be brewed around.

We've all seen the Blue-Red Prowess decks floating around the web and in various rounds of the Star City Games Open Series piloted by SCG Grinders like Caleb Sherer. There's just a few things holding the deck back, I think. First, the fact they're playing this card....

This card is part of the reason why Standard is just so darn expensive this season. Everyone said he was going to be the worst Planeswalker, and now we have decks splashing blue for Merfolk Mage (Merfolk Looter + Snapcaster Mage). Looting no doubt is a powerful ability, and something the Prowess deck needs, but Jace feels more like a control card.

Prowess at it's heart should be an aggro deck. "You don't go half-gangster" is something Patrick Sullivan said during the deck's first showing during one of the SCG Opens. Jace can't attack nor does he really progress your game plan of trying to end the game as quickly as possible.

You know what card that's currently in Standard does further your game plan of ending the game as quick as you can? 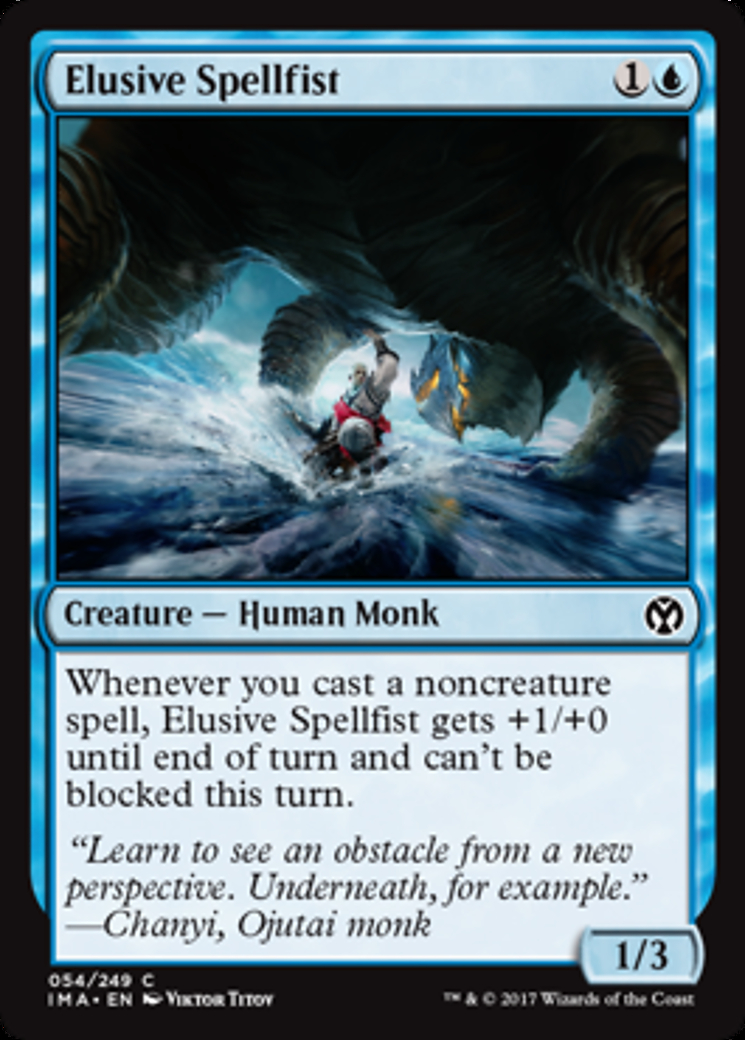 Just like Jace, it's still a two drop but it has the added bonuses of being able to attack and has a pseudo-Prowess plus the fact he becomes unblockable.

With the first problem solved, we encounter another problem. We still need to draw cards and loot away our dead draws. Naturally, I went to my old favorite card...

This card burst on the scene in a couple of different ways. It had combo applications when it premiered at the first Pro Tour it was legal in, and later in the hands of Yuuya Waatanabe in a Jeskai Tokens deck that used it more for the pure value of pumping your team and drawing cards. Plus, fueling Delve for Treasure Cruise which in itself is nothing short of amazing.

With Jeskai Ascendancy our creatures are getting +2/+2 for each spell we cast (except Spellfist who will get a measly +2/+1, and unblockable).

In a meta defined by fetchlands and four color mana bases, splashing white in a two color deck should be a cinch. In addition, with white you gain access to the other Prowess superstar Seeker of the Way, and he gets the added benefit of gaining some of your life back since you aren't going to be going half-gangster, playing defense and blocking your opponent's attacks.

Okay, you caught me, I went four-color. I splashed green for Atarka's Command, but that's only because we needed to add some fetchable tango lands and, well, Atarka's Command is a sweet card.

This deck looks a lot like a Modern tempo deck would look, with fifteen spells that draw you cards (including Ascendancy) and scry cards like Titan's Strength. In fact, it looks a lot like my current Modern deck of choice (just, mine has Delver of Secrets and better burn spells).

I like to keep it creature light and have counter spells in the sideboard to bring out against the control decks like Dark Jeskai with all of their removal.

To be fair, the deck is light on one-drops which makes splashing black instead of green for something like Duress a pretty appealing option and something that should be toyed with. It's pretty heavy on two-drops which means we upped our mana base to twenty as opposed to the seventeen or eighteen land mana base I usually like with this sort of deck, but with no Delver of Secrets we don't need to worry about trying to flip a creature.

In my limited testing so far with the deck it can be fast and explosive, and the controlling sideboard helps save your creatures. Honestly, I think it's a deck that's capable of carrying a winning record at FNM, or something larger on the back of Monastery Swiftspear and Stormchaser Mage.