Hello and welcome back to the multiverse new player. 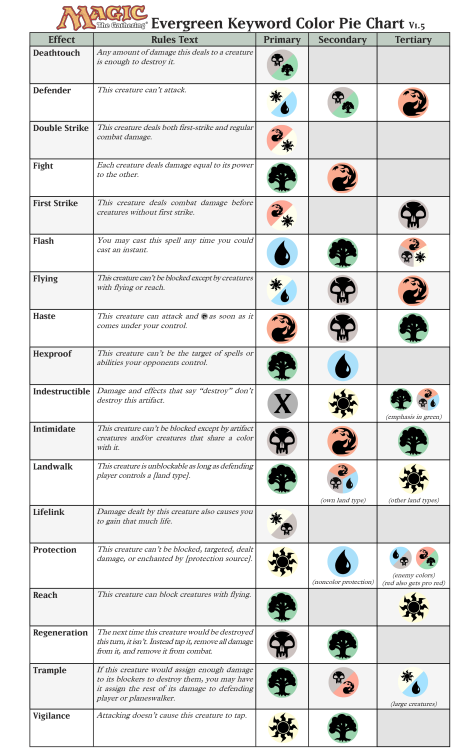 Evergreen abilities are the abilities that Wizard’s will use in any set printed regardless of theme. Some of these abilities have been in use since the very first set of Magic came out in 1993. Adding or subtracting an evergreen ability on the list affects game play in Magic greatly so new additions to the list are carefully considered by Wizards before they join the ranks of evergreen abilities.

The following list of evergreen abilities will not only describe the function of the ability, but will also give examples of the abilities in play. Don’t worry if you don’t get everything today, cards printed from 8th edition onward have reminder text that will help you remember the rules.

Deathtouch, an ability found mostly in black and green cards, is the first ability we will loook at today. Deathtouch means that any amount of combat damage done to a creature is enough to destroy it. This makes smaller creatures far more effective at taking out larger threats on the board. For example, Hand of Silumgar can take out a beefy Vastwood Gorger. So you're opponent will be less likely to attack with the Vastwood Gorger, knowing that it will be sacrificed if he does.

Defender can be found in all colors, and is mostly applied to a creature type known as wall, however it can also be found in some other creatures. Creatures with defender generally have low power and high toughness. Creatures with defender are unable to attack during the combat phase. They can however block attacking creatures. So while it can't attack, Guardians of Meletis could still block a Prized Unicorn. While this by itself would not deal any damage to Prized Unicorn, adding two +1 / +1 counters to your wall with a Dragonscale Boon means that it can take out Prized Unicorn.

Enchant is a keyworded ability that applies to aura’s of all colors. Enchant is always followed by a word specifying what can be enchanted by that aura. Some can be enchanted to creatures, such as Stab Wound, which deals damage to a player at the beginning of each upkeep. Some can be attached to lands like Awaken the Ancient which turns a land into a 7 / 7 creature. These bonus effects remain on the enchanted permanent until the enchantment is exiled or destroyed.

Equip can be found on a special type of artifact card called equipment. This keyword allows players to attach an artifact to a creature, thus boosting its stats and providing other fringe benefits to the creature or its controller. Equipment must first be played on the battlefield for its mana cost, and then equipped to a creature for its equip cost. Equipment can be transferred to another creature any time you could play a sorcery by again paying its equip cost. Sword of the Animist gives an equipped creature a +1 / +1 bonus and the ability to play an additional land from within your deck.

Fight is a green and red ability that allows two creatures to deal damage to each other equal to their toughness. This should not be confused, however, with combat as combat is a phase unto itself, where as fight is limited to dealing damage. This distinction is important as first strike damage only applies during combat. Other static abilities, such as deathtouch however do still work. So, while Foe-Razer Regent gets two +1 / +1 counters on it because of its enter the battlefield ability where it is compelled to fight another creature, it would not get any additional counters on it during regular combat as combat is not fighting. Combined with cards like Epic Confrontation however, your Foe-Razer Regent can become quite large.

Flash is a typically blue and green ability that allows you to play a card any time you could play an instant. This mechanic is interesting on cards like Harbinger of the Tides where you can both get a creature into play during an opponent’s turn as well as bounce a creature back to its controller’s hand. If done correctly, after attackers are declared but before blockers are assigned, this leaves you with an extra creature to block with and one less threat to deal with.

Haste can be found in green, black and red, and allows creatures to both attack or be tapped for their abilities on the same turn they are summoned. Goblin Rabblemaster, for example, puts out tokens which have haste, making them able to attack on the first combat they are put into play for.

Hexproof is an ability that stops your creatures from being the target of spells and abilities your opponent controls. Unlike its older cousin, shroud, this means that you can still enchant and target your creature but your opponents cannot. It should be noted that effects like deathtouch which do not target a creature still take effect. This means that you could grant your Reaper of the Wilds hexproof to avoid it being forced to fight another creature, but if it blocked a Sedge Scorpion the same turn it would still die. Granting hexproof to a creature does not make existing enchantments fall off.

Indestructible is found on white and artifact cards. Simply put effects that say destroy do not actually occur. A Darksteel Citadel will not be destroyed by a Demolish or Smash to Smithereens, and a creature with indestructible would not be sent to the graveyard even if it's dealt lethal combat damage.

Lifelink can be found in both black and white cards. Lifelink means that when creatures deal damage equal to their toughness, its controller gains that much life. This takes effect both when a creature deals combat damage and when it deals damage during a fight. Damage done in excess of a creature's toughness still causes life gain. So when a Abzan Battle Priest has a +1 / +1 counter on it, it will gain its controller 3 life when you attack with it. Life gain also happens when dealing damage to a player.

Menace is an ability found on red and black creatures. It is an evasion ability like flying. It is the newest evergreen ability found in Magic Origins. Creatures with Menace can only be blocked by 2 or more creatures. Boggart Brute would need to be blocked by 2 creatures during regular combat in order to be stopped, however it can still be forced into dealing damage to a single creature with the fight ability.

Prowess is an ability found on blue, red and white cards. It grants a +1 / +1 power buff to your creature when you cast a non-creature spell. This buff can be stacked with when multiple spells are cast on the same turn. Mage-Ring Bully, which we looked at earlier, gets a power buff when you play Dragon Fodder, meaning that in some circumstances you can cheat creatures into play and still get Mage-Ring Bully’s prowess trigger to activate.

Reach is an interesting ability found in red and green cards. Creatures with reach, while they do not have flying, can block as though they have flying. This means that a Hitchclaw Recluse can block and attacking Ashcloud Phoenix, even if it would die in the process.

Regenerate is a black and green ability that allows a creature that would be destroyed to instead be untapped and returned to the battlefield with no damage on it. This is an incredibly useful ability that allows you to block another creature with impunity. A creature enchanted with Molting Snakeskin not only gets a nice power buff it also is able to be regenerated. A regenerated creature keeps all its enchantments on it, so Molting Snakeskin remains useful as long as you can pay for the ability.

Trample is an effect that causes excess damage done to a creature gets done to a player instead. A Sylvan Messenger’s Trample may not seem like much, but comboed with Titanic Growth, suddenly you have a very dangerous creature.

Vigilance means that a creature does not tap when it attacks. Found mainly in green and white creatures, vigilance means that a creature that would otherwise be unable to block next turn is instead able to. This technique allows creatures to deal lots of damage without leaving an opening for the other player to attack. An Alabaster Kirin for example can attack with impunity thanks to its flying, then block at will the next turn thanks to its vigilance.

The above evergreen abilities allow a player many options when building a deck for Magic the Gathering, something that we will be taking a closer look at in a few weeks. Learning these keywords are not necessary for playing a casual game of Magic as most are explained in italicized reminder text on each card they appear on. Join me next week, when I take a look at cards that must be unique on your side of the battlefield in order to be played.