Hello new player and welcome back to the multiverse.

In our last article we took a look at how the phases of a turn worked in a game of Magic the Gathering, including a brief look at combat. Combat is one of the most important parts of Magic as it provides a player with his most consistent chance to do damage to another player. With that in mind, we will take a more detailed look at how different combat scenarios might play out.

In a game of Magic the Gathering, you attack your opponent, rather than attacking the creatures your opponent controls. Your opponent then has the chance to defend himself, by assigning creatures to block your incoming attack. Damage is dealt to creatures and players simultaneously, and then creatures who were dealt damage in excess of their toughness will be sent to the graveyard.

Early in the game, there might be a number of reasons why you might choose not to attack. You may wish to build up an army, whose combined abilities give you a better chance to do more damage to your opponent. Perhaps you wish to leave yourself blockers available for when your opponent attacks on his turn. Or perhaps you see that your opponent’s creatures will destroy your attackers. Whatever the reason, choosing not to attack can be an effective strategy at different points of the game. If you choose not to attack, combat ends with no one taking damage and all your creatures remaining untapped.

It is important to note however, that choosing not to attack does not mean that you skip the combat phase. This means that cards like Citadel Siege, which trigger at the beginning of combat, still activate, even if you choose not to attack that turn.

With this in mind let's take a look at one combat scenario in three different ways. 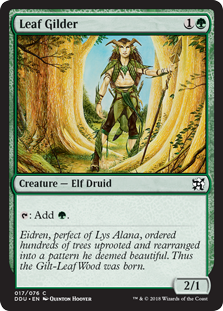 What happens if combat played out differently again. It's your third turn, so you have 3 green mana available to you. You attack with the Leaf Gilder. Your opponent plays Raise the Alarm, and blocks your Leaf Gilder. This time, however, you notice that you are holding a copy of Awaken the Bear in your hand. Awaken the Bear gives your Leaf Gilder a nice +3 / +3 bonus as well as trample. Trample means that when your creature is blocked, if it deals more damage than the defending creature can take, you deal the remainder of the damage to the defending player. So, in this case, rather than your Leaf Gilder going to the graveyard, it remains on the battlefield, and it deals an additional 4 damage to your opponent's life total.

Let's move onto a different example of combat. 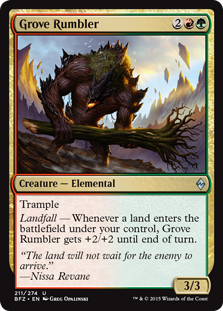 So you make a calculated decision to block it with your Ambuscade Shaman as well.

In any situation where a creature is blocked by multiple creatures, it is the attacking player who decides how damage is divided. Lethal damage must be assigned to one creature before moving on to the next. (1 point of death touch is considered lethal) Your opponent must not choose how to divide the damage among your creatures.

On the one hand, he could deal lethal damage to your Abzan Guide, as it is your largest creature. However, your Ambuscade Shaman does give other creatures a temporary bonus to both power and toughness. How your opponent divides damage may betray his long term strategy for this game. No matter how the damage is divided, no damage will be dealt to your life total, as your creatures can take up to 6 points of damage while your opponent is only dealing 5. As another side note, you as the defending player will still gain life from your Abzan Guide’s lifelink ability.

These are just a few examples of how combat can play out in a game of Magic. Remember, while combat can play out in many different ways, it will always follow the same basic steps. You will start with the beginning combat step, followed by a declare attackers step, then blockers are declared, damage is dealt to creatures and players based on creature's power, and finally there is an end of combat step.

That’s it for this week, new player, join us next week as we take a look at the different evergreen abilities, such as trample, flying and lifelink that can affect how combat plays out.