With the release of Oath of the Gatewatch right around the corner, we must prepare ourselves to play! Let's take a look at the newest mechanic update to the game: the addition of colourless mana. In Oath of the Gatewatch, players will now be able to draft and build decks that include mana that is not associated to any colour. To answer why this is important, we must first take a look at what normal mana is in a game of magic.

Most cards cost more than just a single mana to cast, but don’t require you to use a specific colour to cast them. Anticipate costs one blue mana and one mana of any other colour in order to cast it. The additional mana in a casting cost is known as generic mana, and while it can be paid with the same colour of mana to cast the first portion, it doesn't need to be. This allows players to build decks that are more than one colour.

So then what is colourless mana?

Colourless mana, is as it sounds - mana that isn’t associated with any of the five colours of magic. Colourless mana isn’t a new type of mana; in fact, it's been around since the beginning of the game. Cards like Sol Ring have been producing colourless mana for years. Until Oath of the Gatewatch, the colourless mana produced by non-basic lands such as Battlefield Forge could only be used to pay for generic mana costs in spells or activated abilities.

With the release of Oath of the Gatewatch however, we are going to see two big shake ups in how this plays out: 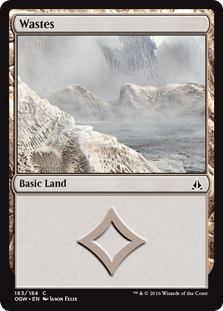 The first change, the addition of the new basic land Wastes, might sound a little confusing so bear with me for a second. Wastes are a basic land which means you can include as many of them as you like in your constructed decks. Wastes, like all other basic lands, produce mana. This mana can be used to cast spells and activate abilities that have a generic cost as it only requires mana to do so, not mana of a specific colour. Oran-Rief Invoker‘s activated ability could be turned on by using eight Wastes. Wastes however, do not have a basic land type or colour, and therefore do not interact with abilities such as Converge or Dominion. So while you could use a Waste to cast Skyrider Elf, it would only enter the battlefield with two counters on it, one for each colour used to cast it. 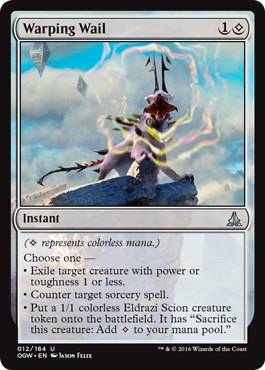 So why this change to the basic structure of magic?

The last question is how do we get our hands on these new Wastes? Unlike other basic lands which can be purchased in land packs, Wastes will currently only be available in booster packs of Oath of the Gatewatch. This means that your best way of getting your hands on this new land other than simply opening packs is to draft them at your local game store! For a list of nights you can draft #atthetower, check out our website’s event calendar.

Well that's it for this edition of Intro to Magic! Join us again soon as we discuss the different formats of magic that are available to players of the game.