Daily Dose of Oath of the Gatewatch – Can I get a Little Support Here!

Welcome all to another edition of the Daily Dose of Oath of the Gatewatch, where today we will be looking at some of the new cards being previewed for the second set of the Battle for Zendikar block. Although still in 2015, the prerelease events for Oath of the Gatewatch are less than 3 weeks away, so its time to look at some more new cards from the upcoming set.

As we have seen with the new Wastes land, there will be a focus on colorless mana, including colorless spells such as this one, Spatial Contortion. 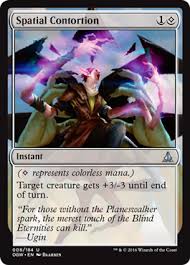 This card shows the true nature of how Colorless mana can be used to add a whole new dimension to casting Magic cards. It truly shows the difference between 2 colorless mana and 2 generic mana. A lot of players might look at this and see a colorless 2 mana spell that can be cast using any color mana, but one of those needs to be specifically a colorless mana. If this spell were in an older set, it would be 2 generic mana, and you would be able to use any mana to cast it, as there was no way to separate colorless mana from any other mana source.

As for this spells ability, we have seen this before in a card called Nameless Inversion. This could be a good removal in Limited and will depend on how much colorless mana you want to have in your deck. I have a feeling that in Limited, colorless mana will be many players second colour or their splash colour.

In the past couple of sets there have been other mechanics that have involved +1/+1 counters such as Outlast and Bolster, and they have decided to add one more in the form of Support. Let’s take a look at one of the new cards with Support, Gladehart Cavalry. 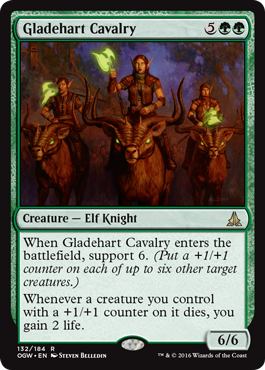 Creatures and spells will have Support N, where N is the number of different creatures you can add +1/+1 counters to. Note that you cannot add multiple counters onto one creature, and you also can’t add it to the creature that provides Support itself. You also don’t need to have N creatures for it to work, as you can choose to put less or even 0 counters onto creatures. You are able to put them onto teammates creatures as well which is nice, as it doesn’t say onto creatures you control.
Support is definitely a mechanic that will reward those that try and have a wide battlefield of creatures, rather than one over-powering one. Cards like Secure the Wastes and Hordeling Outburst will help in getting you many creatures to add +1/+1 counters onto.

Support doesn’t only come on creatures as seen with the new spell Shoulder to Shoulder. 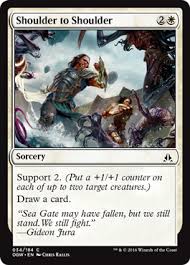 It is unfortunate that this is not an Instant, but I can see this card getting a lot of play in Two-Headed giant. You can have one player that has a deck full of awesome creatures, and one player who has a lot of Support and Surge spells to help them out.

Another advantage of this card is that because you can choose to Support zero creatures, you are able to cycle this card even if you have no creatures to help you try and get what you need to help you in the game.

I’m definitely a big fan of mechanics that add +1/+1 counters, but the verdict is still out on whether Support can be a useful mechanic. It is very dependant on having many other creatures on board so we will have to see if there will be additional cards that will take advantage of this.

Thanks again for reading another edition of the Daily Dose of Oath of the Gatewatch and I look forward to seeing you tomorrow where we will be talking more about some of the new cards from this exciting upcoming set!